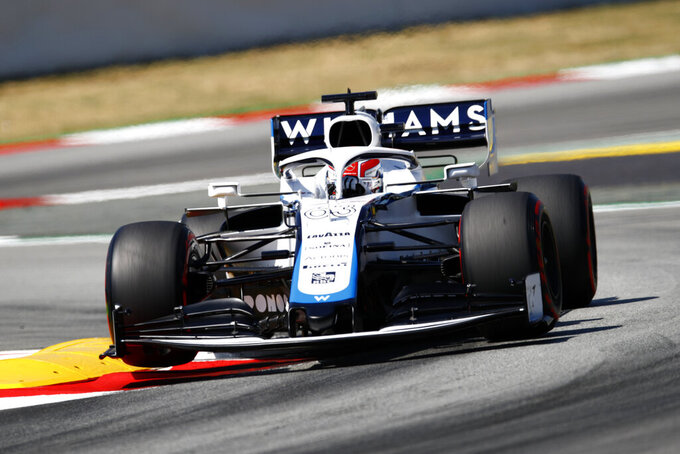 Williams driver George Russell of Britain steers his car during a practice session prior to the Formula One Grand Prix at the Barcelona Catalunya racetrack in Montmelo, Spain, Saturday, Aug. 15, 2020. (Alejandro Garcia, Pool via AP)

Formula One team Williams is hoping its new American owners can restore its position at the top of the sport after a number of difficult years — even if that means ending an era of family ownership.

Williams announced Friday it has been bought by American-based investment firm Dorilton Capital, after being put up for sale in May, as it looks to revive its fortunes. The British team finished rock bottom in the constructors’ standings in the past two seasons, scoring only one point from Robert Kubica’s 10th-place finish in 2019.

Team principal Claire Williams is optimistic that the team, which has shown signs of improvement this ongoing season, can become competitive again under its new owners.

“We wanted to find a partner who shared the same passion and values, who recognized the team’s potential and who could unlock its power. In Dorilton we know we have found exactly that,” she said. “People who understand the sport and what it takes to be successful. People who respect the team’s legacy and will do everything to ensure it succeeds in the future.”

Williams has won seven drivers’ championships and nine constructors’ titles since entering the F1 grid in 1977. However, the last of those came with Jacques Villeneuve behind the wheel in 1997.

“This may be the end of an era for Williams as a family-owned team, but we know it is in good hands,” said Williams, whose father, Frank Williams, founded the team along with Patrick Head and who owns 52 percent of the shares. “The sale ensures the team’s survival but most importantly will provide a path to success.”

The team will continue to race under the Williams name and remain at its English base in Oxfordshire.

Dorilton Capital owns companies in the industrial, healthcare and specialty manufacturing services. It said it has no plans to move Williams away from its traditional headquarters, or to immediately reshuffle management.

The announcement of the purchase comes in the week all 10 teams in F1 signed up to the new Concorde Agreement governing the sport, which runs from 2021-2025 and has been designed to ensure a more level-playing field in the future.