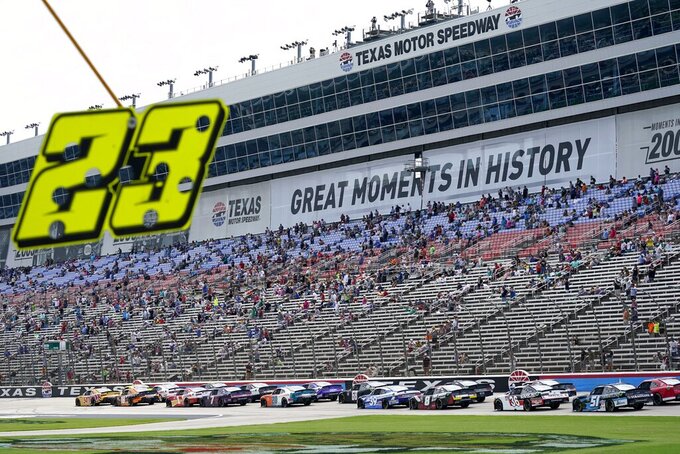 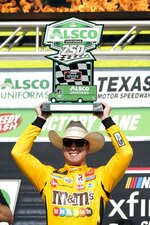 FORT WORTH, Texas (AP) — Kyle Busch has often said he would stop racing in the Xfinity Series when he reached 100 wins. With one to go, he is waffling a bit on that.

“So here’s the problem, Joe already sold me for next year, too,” Busch said, referring to team owner Joe Gibbs. “So I don’t know. We’re going to have to talk about that.”

Busch got career victory No. 99 on Saturday in Texas, where he stayed ahead of Justin Allgaier through two late restarts with pushes from series points leader Austin Cindric, the last going into a green-white overtime finish.

It was Busch’s 10th Xfinity win at Texas, where he led six times for 94 of the 171 laps and won for the second time in two starts this year — he also won the inaugural race on the road course in Austin, Texas. He led the final 32 laps, including the four extra because of the 10th and final caution.

Busch already had twice as many as Mark Martin’s 49 career victories that are the second-most in series history.

Allgaier led 23 laps, but was unable to regain the lead despite being side-by-side with Busch on three restarts in the closing stretch.

“There at one point I was building a lead and I was like, `Oh, well, all right, this is going to be pretty easy.' And then there at the end Allgaier got there, and then it was a race,” Busch said. “ He was kind of hard to hold off there for a few times. ... We were so equal that I felt like that if ether of us was out front, barring something happening with lapped lap traffic, that was going to be who who goes on to win.”

The victory was the 300th overall for Joe Gibbs Racing in Cup and Xfinity with Toyota.

Cindric finished third, followed by Daniel Hemric, Brandon Jones, AJ Allmendinger and Noah Gragson, who last October was passed on the final turn to miss out on a victory at Texas.

Busch took the inside line for the final two restarts, taking off both times after pushes from Cindric, who didn't feel he had enough to challenge either Busch or Allgaier for the win at the end.

“The best thing you can do is dictate someone else’s destiny. (Busch) wasn’t racing for points so that played into my decision there,” Cindric said.

"Certainly he was the car that I needed behind me in order to get the job done,” Busch said.

After a restart with 29 laps left, following a questionable caution involving Jones, Busch and Allgaier were side-by-side and appeared to bump on the backstretch of the 1 1/2-mile track, and they crossed the line again before Busch finally cleared and was able to stay in front the rest of the race.

That yellow flag came out when Jones got loose and started to spin in Turn 4, though he quickly regained control of the No. 19 Toyota without hitting anything.

Myatt Snider crashed on the backstretch with 10 laps to go in regulation when he was hit behind by Josh Berry, who earlier made contact that knocked playoff contender Jeb Burton out of the race.

On the 163rd of the scheduled 167 laps, there was let another caution when Harrison Burton crashed hard after getting loose in the compound traction on the track. Burton won at Texas last October.

Jeb Burton was done after crashing hard into the inside wall on the 60th lap. He slid out of control after slight contact from behind from Berry, who was heard on the radio taking responsibility and telling his crew to apologize. Burton's response was that he didn't care and would see him after the race.