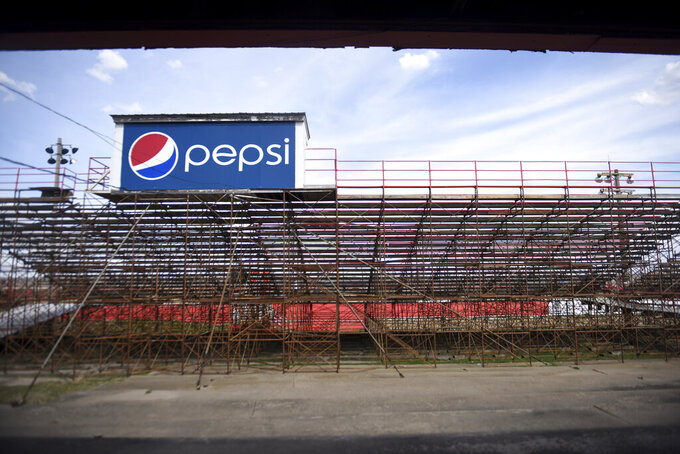 This Wednesday, April 22, 2020 photo, dshows Park Jefferson International Speedway in North Sioux City, S.D. The track will practice social distancing while allowing 700 people to attend. The track has sold out of the 700 tickets it offered to a track that usually holds 4,000, for Saturday's race. They are taking steps to reduce the chances that the event will become a hotbed of coronavirus transmission, including keeping the crowds well below capacity, screening people's temperatures and making concessions cashless. (Abigail Dollins/The Argus Leader via AP)

SIOUX FALLS, S.D. (AP) — Two South Dakota speedways reversed course Thursday and said they would hold their weekend races without spectators, after Gov. Kristi Noem warned fans against attending the sold-out events because of the coronavirus.

New Raceway Park said on Facebook that it came under “pressure” from the governor's office, county and health officials, and the U.S. Centers for Disease Control and Prevention. Park Jefferson International said it made its decision after discussions with state and local officials.

“They didn’t tell us that we couldn’t have fans, but to tell you the truth, it just looked like it was going to be so difficult to keep people safe,” Dennis Moore, a promoter at New Raceway Park, told The Associated Press. “We don’t want anyone to get sick, and we don’t want to feel like we created a problem.”

“I think we just eliminated a big problem for all of the fans,” Moore said. “They’re not happy, but I think in the long run everyone will just be better off.”

Noem, a Republican, said Wednesday that she thought the events were a bad idea because they could lead to the spread of the coronavirus, but that she wouldn't force the speedways to cancel. She cautioned that the crowds would violate her guidance not to gather in groups of more than 10.

She said Thursday that she hadn't spoken personally to race organizers, but she praised their decisions.

“I just want to thank them. I think their response has been wonderful," Noem said.

For most people, the coronavirus causes mild or moderate symptoms, such as fever and cough that clear up in two to three weeks. For some, especially older adults and people with existing health problems, it can cause more severe illness, including pneumonia, or death.

Health experts have said eliminating group gatherings is crucial to curbing the spread of the coronavirus, which can be transmitted by people who do not exhibit symptoms.

Race promoters said they had taken steps to reduce the chances that the event would become a hotbed of virus transmission, including keeping the crowds well below capacity, screening people’s temperatures and making concessions cashless. The Saturday race at Park Jefferson International Speedway sold just 700 tickets, for a track that usually holds 4,000. The Sunday event at New Raceway Park in Jefferson sold out 500 tickets, less than one-third of its capacity of 1,800.

The owner of Park Jefferson International Speedway declined to comment Thursday. On its website, the raceway said: “Governor Noem and her team have been doing a great job leading our state and have asked the citizens to be smart and innovative in how they operate. While we felt we were innovative in how we were addressing fan safety by abiding by the CDC guidelines, we also know the importance of working with our officials' guidance on fan attendance."

Both speedways encouraged fans to watch the races from home on pay-per-view channels.