Season of change: NASCAR's Next Gen car arrives for 2022 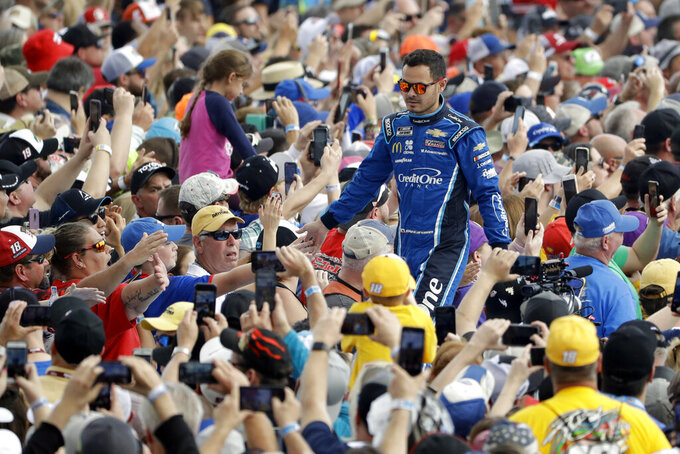 DAYTONA BEACH, Fla. (AP) — Kyle Larson balanced a car seat on a suitcase while the thick strap from another bag pulled tight around his neck. Both his kids were spinning on the metal stanchions outside LAX and Larson couldn't find the bus to the rental cars.

“Just what a champion looks like, huh?” he laughed.

NASCAR throws its version of the Super Bowl this Sunday to open its 2022 season. The Daytona 500 is the official kickoff, though NASCAR opened two weeks prior to “The Great American Race" with a star-studded, experimental exhibition inside the Los Angeles Memorial Coliseum.

The Clash for more than four decades opened “Speedweeks,” which has now been whittled down to just six days of cars on the track. NASCAR's decision to move the event away from Daytona International Speedway, its only home since its 1979, angered purists but it was a smashing success and NASCAR must now figure out how take advantage of the buzz through Daytona and the next 37 weeks of racing.

Larson will be a key player in NASCAR's push to widen its reach to a younger and more racially diverse audience. The reigning champion returned to the series last year to drive for Hendrick Motorsports following a nearly yearlong 2020 suspension for using a racial slur.

Larson had an unbelievable return, winning 10 times, the Cup Series title and the All-Star race, all while also crisscrossing the country to run a sprint car in his spare time. Larson is a fan favorite and represents the kind of grass-roots racer NASCAR fans have long embraced.

But many others relate to the 29-year-old for other reasons: He's a father and a family man, a symbol of redemption, a changing of the guard. Larson is also half-Japanese and the first Cup champion to emerge from NASCAR's diversity program.

He will again visit pockets of the country where folks don't make it to many NASCAR races as part of his packed 2022 extracurricular schedule. But his goals? Larson hasn't set any just yet.

“Ultimately the goal is always to win the championship,” Larson said. “As far as numbers of wins, I don't ever really set a goal until we get a month or so into the season. That's when you get an idea of where yours cars are stacking up against the competition and what sort of potential you have.”

Even that's not a foolproof method this year.

This season at last marks the debut of the Next Gen, a new car years in development and built to address many headaches. The Next Gen was a collaborative project between NASCAR and its stakeholders and the car is designed to cut costs, help smaller teams close the gap on the big guys, make it cost capable for new ownership to enter the sport and give the manufacturers greater brand identity.

The pandemic delayed the car a year and the Next Gen didn't see racing action until the Coliseum, where it ran just fine. The car held up well in car-to-car contact — “we can bump and bang,” Clash winner Joey Logano declared — but its still a wildcard.

NASCAR held an industry crisis meeting in Nashville in December to hash out driver concerns about performance, and many of those same drivers now sit on a seven-person board of directors of a “Driver Advisory Council” announced last week.

The council gives the drivers an organized voice to push for tweaks or change.

“Communication from drivers to other stakeholders in our industry has been a challenge for years. This will most definitely help clarify feedback from drivers,” said Logano, a board member. "Safety, fan experience and a great on-track product are just some of the goals.”

Fan experience will be critical as NASCAR navigates its new identity. The series has made so many changes over the last several years that many of its loyalists no longer recognize the the sport that started with Southern bootleggers outrunning the authorities in their cars full of moonshine.

The Confederate flag has been banned, and Ice Cube performed a halftime set at the Coliseum in a never-before-seen pause of a race for a hip-hop show. NASCAR has said it wants to be apolitical, but has long been intertwined with religion and politics.

The “Let's Go Brandon” derisive chant about President Joe Biden evolved from a NASCAR race, and Brandon Brown, the Xfinity Series driver at the center of the brouhaha, had an offseason faceoff with NASCAR over sponsorship associated with the LGB sensation.

Brown ultimately won't showcase the cryptocurrency associated with the chant on the car fielded by his family team in NASCAR's second-tier series.

So many NASCAR decisions seem foreign to longtime fans — a dramatic overhaul to last year's schedule put six road courses on the schedule and turned Bristol into a dirt track for its spring race — and NASCAR this year added Gateway outside St. Louis to the calendar and will continue to explore nontraditional venues after pulling off The Clash.

It's a time of change for the stock car series, which needs new fans alongside its loyal base. Steve O'Donnell, executive vice president of NASCAR and chief racing development officer, acknowledged differences between series leadership and the drivers that made discussions “tough at times.”

But dialogue has improved since the December meeting, O'Donnell said trust has been built and the industry was buzzing with excitement as NASCAR left Los Angeles last week.

“I really do feel like we’ve got a much better relationship in terms of listening, but also having an understanding when we make a certain decision, there is some reason behind it,” O'Donnell said. “Because we went left, you wanted to go right, doesn’t mean we didn’t listen.”