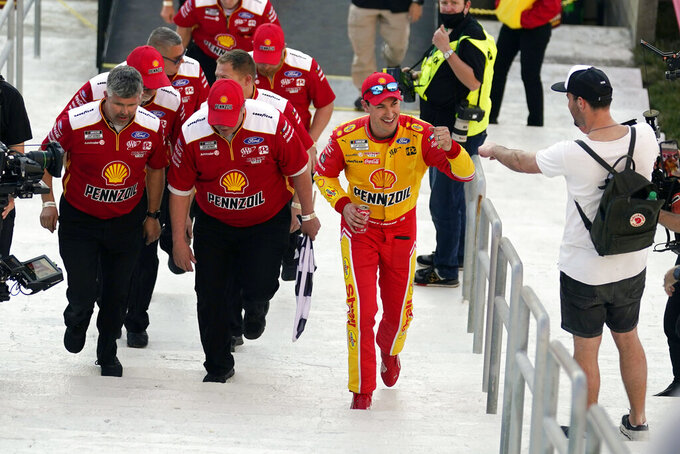 Joey Logano, second from right, bumps fists with a fan as he walks up to Victory Lane with his crew after winning a NASCAR exhibition auto race at Los Angeles Memorial Coliseum, Sunday, Feb. 6, 2022, in Los Angeles. (AP Photo/Marcio Jose Sanchez)

CHARLOTTE, N.C. (AP) — NASCAR's top drivers have once again unified to form an independent council to gain a collective voice in decisions that affect the sport.

The Drivers Advisory Council announced on Friday is a more organized effort than a previous attempt to unify in 2014. A board of directors has been established and retired driver and current NBC Sports analyst Jeff Burton agreed to oversee the effort.

The board is comprised of seven members that represent teams from the front and back of the Cup Series starting grid. Each board member will serve as a representative to a smaller group of drivers.

The board includes Denny Hamlin, the three-time Daytona 500 winner who spearheaded the first attempt at a driver council, as well as former Cup champions Kurt Busch and Joey Logano. Also selected were Austin Dillon, Corey LaJoie, Daniel Suarez and retired driver Kyle Petty, who like Burton is an NBC Sports analyst.

“As a current driver and also a team owner, I now see things from a different perspective and that has made me appreciate the importance of collaboration across the industry,” said Hamlin, who is entering his second season as co-owner of 23XI Racing with Michael Jordan.

“The new council will deliver a unified, collective voice from the drivers to help address any challenges we face and help accomplish the common goals the industry shares.”

Hamlin launched a Driver Council late in the 2014 season when he expressed displeasure with NASCAR's plans to add more downforce to the cars. NASCAR executive Mike Helton told Hamlin that if the drivers had better suggestions, they should meet with NASCAR leadership.

That inspired Hamlin's council, which communicated primarily by group text in its earliest days but had positive impact in the sport over the next several years. The council eventually disbanded, leaving the drivers with a scattered, minority voice in planning the Next Gen car.

Talks began with Burton to relaunch a driver council, and the need for it was never more evident than in December at the season-ending awards ceremony when NASCAR held an emergency meeting with all its stakeholders to discuss tensions about the new car being introduced this season.

This time, NASCAR has pledged to work with the driver council.

“Collaboration is critical to our growth, and we welcome any opportunity to strengthen communication with our drivers,” said Steve O’Donnell, NASCAR executive vice president. “We often look to drivers for input when making decisions that affect the sport, and the Drivers Advisory Council will help streamline that communication. Working together, we will continue to deliver the great NASCAR racing experience our fans expect and deserve.”

The Driver Advisory Council will be supported by the Race Team Alliance, a group of 14 Cup Series organizations that banded together in 2014 for a unified voice among team ownership.

“Having a formalized group through which the drivers can better communicate will be a great asset for all of us,” said said Dave Alpern, President of Joe Gibbs Racing.

Logano, the 2018 Cup champion, said the board is “made up with experienced, forward-thinking drivers” who can help improve a broken communication system between the competitors and NASCAR stakeholders.

“This will most definitely help clarify feedback from drivers and help move our sport forward with a unique perspective from behind the wheel,” Logano added.

Among the drivers immediate goals are addressing safety, improved on-track competition and the overall fan experience. Suarez, the only graduate of NASCAR's diversity program on the board, said there have been positive gains since he arrived from Mexico a decade ago but he'd like to see more accomplished.

“This will benefit present and future sponsors, our current and future fan base, as well as the teams and viewership in general — I say this with great sincerity and commitment to support this sport, the fans and the sponsors we represent,” Suarez said.