NASCAR celebrates ahead of radical race in LA Coliseum 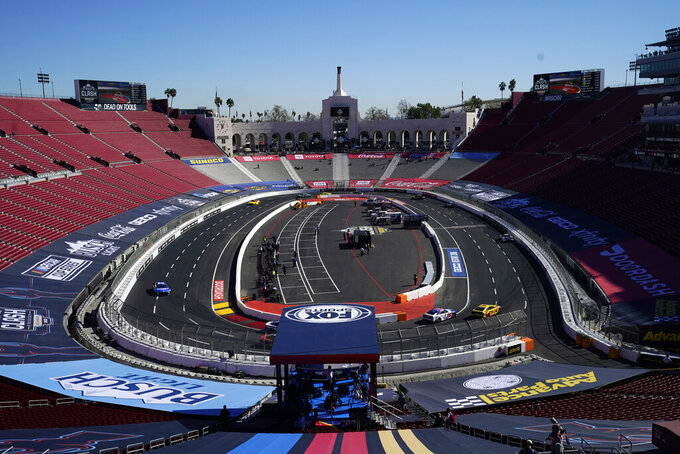 Competitors race around the track during a practice session at the Los Angeles Memorial Coliseum, Saturday, Feb. 5, 2022, in Los Angeles, ahead of a NASCAR exhibition auto race. (AP Photo/Marcio Jose Sanchez)

LOS ANGELES (AP) — Kevin Harvick has twice raced a stock car through the streets of Los Angeles. He watched Mickey Thompson's super trucks on television when they raced inside the Los Angeles Memorial Coliseum.

But the Bakersfield native had never actually seen the Coliseum in person, not until Saturday when NASCAR started its engines on the 2022 season and he drove his Ford past the USC locker room and through the same tunnel the Trojans use on game days.

Harvick steered his way onto the asphalt that now covers the famed field. Then he turned laps on the temporary quarter-mile track built inside one of the most hallowed venues in sports.

Nope, the Busch Light Clash scheduled for Sunday night is not your grandfather's race.

But this isn't your grandfather's old NASCAR, either.

The series has taken a fresh approach to its staid scheduling and cookie-cutter tracks, its latest gamble this made-for-TV special event at the Coliseum. A collaboration between NASCAR and Fox Sports, the project blew past its $1 million budget but guaranteed NASCAR six hours of live programming and a fresh attempt to build momentum ahead of the Feb. 21 season-opening Daytona 500.

The industry has first-day-of-school energy and teams seem genuinely motivated to perform Sunday night. NASCAR, claiming it is pleased with ticket sales, and said at the start of this week that 70% of people who had bought seats identified as first-time NASCAR attendees.

“We talk about this all the time — the Los Angeles market is huge for us,” said Ben Kennedy, the 30-year-old great-grandson of NASCAR’s founder and current senior vice president of strategy and innovation.

“This is a huge opportunity for us to come to Los Angeles and do it in a different way that we’ve ever done before,” he added, “But to do it two weeks before our biggest event of the year, the Daytona 500? You think about ”new" and “innovative” and “bold”... the kind of words that are starting to be ingrained in our culture."

A concert stage for a prerace Pit Bull show and a performance by Ice Cube at “halftime” was built along the Peristyle plaza. Their sets will be performed under the Olympic cauldron torch built for the 1932 Summer Games.

The torch is lit for special events at the Coliseum.

It was glowing Saturday, the day before NASCAR's expensive exhibition. The Clash was held at Daytona every year since its 1979 inception and it had been the unofficial season-opener the last 40 years.

“This is the type of event that you need to blow it out of the water at the start of the season to get the eyeballs," Harvick said. "We live in different times and trying new things and having the guts to do it is sometimes hard to do, but the rewards are pretty big on the other side when it works.”

The Clash was always an exhibition appetizer to the Daytona 500 and typically a preview of “The Great American Race.” But its prestige had diminished, NASCAR last year moved the race to Daytona's road course, and The Clash stopped feeling special years ago.

“That race was kind of just going on, I feel like, to go on,” said reigning Cup champion Kyle Larson. “It added a week of being in Daytona ... all for what?”

That energy changed as soon as NASCAR completed the deal to race at the Coliseum, the centerpiece of both the 1932 and 1984 Summer Games and site of some of the top sports moments in history. The Coliseum in 2028 will become the first venue to host three Summer Games.

“When this was first drawn up, I’m sure there were a lot of people that probably didn’t think it was possible,” Larson said. “It’s added a lot of excitement. It’s given our television partners something to promote differently than just us being at Daytona for another week. It gives us an opportunity to not only have more eyes on this event ... but also be able to promote the Daytona 500 through this event.”

Chase Elliott was fastest in Saturday’s practice session; NASCAR divided the 36 cars into three groups of 12 and each group was on track for three eight-minute sessions. Single-car qualifying later Saturday set the lineups for heat races that will be held ahead of The Clash on Sunday.

The heat races will determine the 23 cars that advance into The Clash, a 150-lap race that will be stopped at halfway for the Ice Cube concert. Winning the race counts nothing toward the championship, the driver and team get only a trophy and a share of the purse.

But with the new venue came renewed enthusiasm for winning the race.

“I think it would be super cool to be the first person to win this race," Elliott said. "If you’re standing on top of the mountain at the end of the day for something like this, this type of location and this type of an event, I think it is special and it should be for whoever wins.”