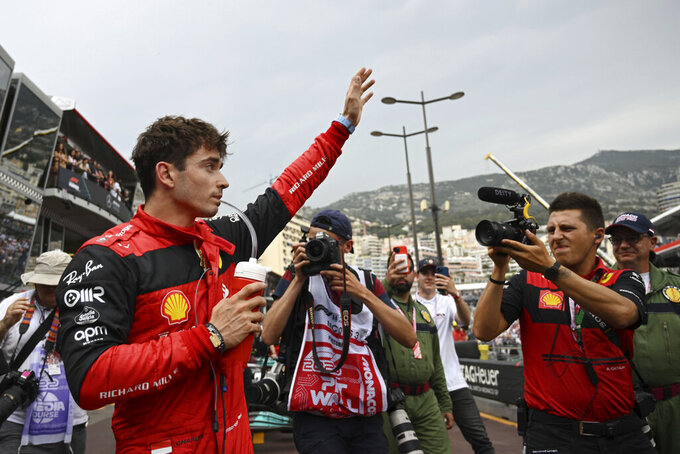 Ferrari driver Charles Leclerc of Monaco celebrates after setting the pole position in the qualifying session at the Monaco racetrack, in Monaco, Saturday, May 28, 2022. The Formula one race will be held on Sunday. (Pool Photo/Christian Bruna/Via AP)

MONACO (AP) — On his home track, where he cycles from his apartment to the course, Charles Leclerc hopes to finish for the first time and reclaim the Formula One points lead.

Leclerc was scheduled to lead the field from pole Sunday in the Monaco Grand Prix — the same position he was in a year ago. But he never even started the race because he crashed his Ferrari at the end of qualifying and the car couldn't be repaired in time for him to compete.

In three previous starts on Monaco's city streets, Leclerc has retired twice with crash damage and failed to start. This Sunday, he hopes a win pushes him ahead of reigning champion Max Verstappen in the F1 standings and dismissed any notion he's cursed on his hometown streets.

“I’m not superstitious at all," Leclerc said. "We’ve had a smooth weekend until now and we’re starting in the best place possible. Hopefully we have a clean race and we finally have a good result at home.”

Leclerc was fastest in two of three practice sessions, as well as qualifying.

“I saw the yellow flag, I realized that the car in front of me had crashed and you don’t see where he has crashed, so you enter the corner without knowing where he’s going to be,” said Sainz. "I hit the brakes harder and managed to clip him with the back of the car. It would have been a pretty good save if I’d have saved it, because there was basically no time to save it. But it’s what happens in Monaco.”

It concluded an eventful day for Sainz, who was fined 25,000 euros ($27,000) for impeding Lance Stroll during Saturday's final practice. Sainz almost came to a stop on the track at the last corner with Stroll behind him after receiving what race stewards called “a series of grossly incorrect messages.”

And, Ferrari team principal Mattia Binotto acknowledged reliability issues are a concern following Leclerc's engine failure at last week's Spanish Grand Prix. Leclerc was leading when his Ferrari sputtered to a stop and reigning F1 champion Max Verstappen went on to win his third consecutive race and take a six-point lead over Leclerc in the standings.

“Reliability is always a concern,” Binotto said. “It’s worrying us, we’re looking at what happened."

Red Bull, meanwhile, has squashed any internal drama that might have lingered following team orders last week that demanded Perez relinquish the lead to Verstappen.

Red Bull principal Christian Horner said the team spoke with Perez after the race in Spain, and Perez qualified third in Monaco alongside teammate Verstappen.

“He’s a great team player, he’s a huge part of our team,” said Horner. "We saw the issues that obviously Ferrari had as a team, it was a logical thing to do, not to allow the drivers to fight each other, and try to bank those points.

“We’ve obviously talked it through, the rationale behind that, which he fully accepted, and understood. Now we try and take the fight to Ferrari this weekend.”

Lando Norris of McLaren qualified fifth, one spot ahead of George Russell for Mercedes. Russell's teammate, seven-time champion Lewis Hamilton, qualified eighth and was unable to improve his position because of the red-flag brought out by Perez's spin.

Hamilton is on course for an eighth race without a win, which would equal his worst Mercedes run since the end of 2015 and the start of 2016. He has a record 103 F1 wins, and even without the late caution in qualifying, doesn't think he could have improved his position.

“The red flags cost me my final lap, but I don’t think it was going to be much different,” the British veteran said. “The car feels pretty bad out there and we’re having to take some big risks to get anywhere near the times of the cars in front.”

The weather forecast called for rain Sunday, and Leclerc wondered what it might do to the familiar streets.

“City tracks are very tricky. In the wet I’m sure Monaco is even tougher,” said Leclerc.

“Bring on the rain. Nobody knows how the tires will be in the wet,” he said. “Roll the dice on strategy if we can.”

As the sun splashed the circuit, stars were rushing to the circuit in time for qualifying. F1′s iconic race is as much about bling and glamor as the racing itself, and celebrities flock here every year.

It’s close to Cannes, where the film festival is held, and over the years Star Wars creator George Lucas has been a regular. Seen in Monaco ahead of Sunday's race have been: actor Ryan Gosling, NBA scoring great LeBron James, singer Ricky Martin and UFC star fighter Conor McGregor.

The controversial McGregor was already in full-on showman mode on Saturday as he walked — or rather swaggered gunslinger style from side to side — wearing large sunglasses and his pink Versace shirt wide open as he carried a full glass.

McGregor stopped for a few moments to dance in front of a singer, took another sip of his glass and then slipped through the harbor gate.