Kanaan to pair with Johnson to drive oval races for Ganassi 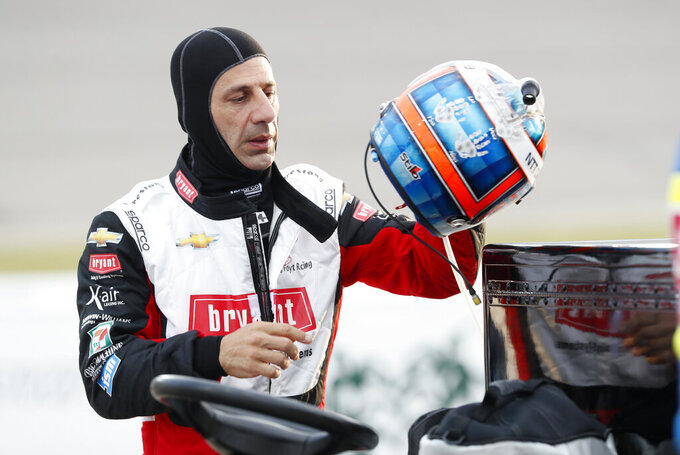 FILE - In this July 18, 2020 file photo, Tony Kanaan, of Brazil, puts on his helmet before the start of the IndyCar Series auto race at Iowa Speedway in Newton, Iowa. Kanaan has another shot at a proper IndyCar farewell tour as the co-driver with Jimmie Johnson the next two years at Chip Ganassi Racing. The seven-time NASCAR champion signed on for the road and street course events, and Ganassi announced Monday, Nov. 23, that Kanaan will complete the season in the No. 48 Honda. (AP Photo/Charlie Neibergall)

Tony Kanaan will have another chance for a proper IndyCar farewell tour with a two-year deal to partner with Jimmie Johnson at Chip Ganassi Racing.

Kanaan will compete in the four oval events on IndyCar's 2021 schedule that Johnson does not plan to run. The seven-time NASCAR champion signed on for the road and street course events, and Ganassi announced Monday that Kanaan will complete the season in the No. 48 Honda.

“I was on the way out and all of a sudden I get a call from Jimmie about running the ovals. He kept saying ‘Doesn’t this make sense?'” Kanaan told The Associated Press. “They didn’t have to twist my arm to come back, especially with Jimmie and Chip.”

Kanaan's 23rd season was supposed to be his last but the popular Brazilian was able to put together only a six-race farewell on IndyCar's ovals. The pandemic then disrupted the entire year and Kanaan was not able to celebrate the end of his career with fans.

The two-year opportunity to pair with Johnson gets Kanaan back to Ganassi, where he raced from 2014 through 2017 and scored his 17th and final victory. It's also a chance to race in front of his rabid base. Kanaan will compete in 2021 in the doubleheader at Texas Motor Speedway, at Gateway near St. Louis and at the Indianapolis 500, where he's a beloved former winner.

Kanaan, who turns 46 on New Year's Eve, is grateful for this opportunity at the end of his career. He's also been picked to drive all six races in Tony Stewart's start-up SRX Racing Series of all-stars next year.

“I guess I must have done something really good in my life,” Kanaan said. "Once you leave a team Ganassi, you don’t get a chance to come back, especially at this time in my career. This is just a perfect fit. It is so obvious, as Jimmie said, for me to race the ovals that he does not want to race.

“Because of the pandemic, I expressed a desire to come back and do ovals. I never said I wanted to do a full season because I was realistic. So this is just too good to refuse.”

The No. 48 will be sponsored by NTT DATA and Bryant, two longtime Kanaan partners. Both NTT Data and Bryant stepped in this last season when Kanaan sold a six-race farewell tour with A.J. Foyt Racing. NTT Data first partnered with Kanaan in 2013, while Bryant has worked with the driver for 14 seasons.

Ganassi, who just hired 23-year-old Alex Palou to drive his No. 10 IndyCar entry next season, liked the idea of a veteran lineup in the No. 48.

“As the Indy car driver market trends younger and younger, experience is something that cannot be taught — especially at the Indianapolis 500," Ganassi said. “There is no one more experienced in the paddock than Tony, and when we needed the right fit for rounding out our oval program, it was clear he was the right choice.

"Tony also knows our team, he knows our system and he knows our drivers. We expect the combination of him and Jimmie to give us the one-two punch we’re looking for in the No. 48.”