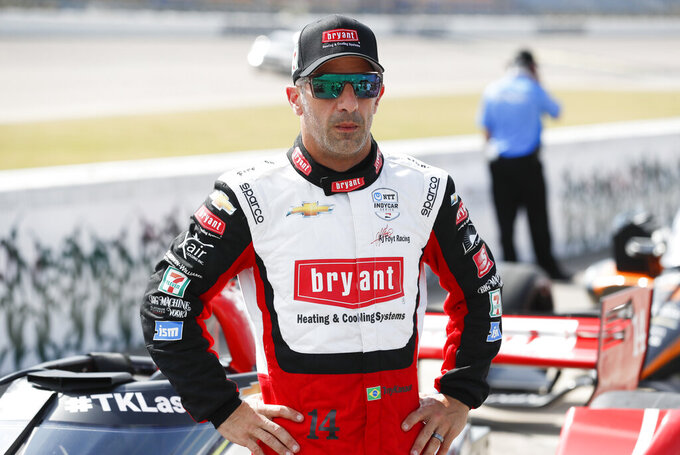 FILE - In this July 17, 2020, file photo, driver Tony Kanaan, of Brazil, stands next to his car during qualifying for an IndyCar Series auto race at Iowa Speedway in Newton, Iowa. Kanaan’s supposed farewell tour last year fizzled amid nearly empty tracks. Then he was given another chance to extend his IndyCar career, this time before fans. His first two races come this weekend at Texas Motor Speedway. (AP Photo/Charlie Neibergall, File)

FORT WORTH, Texas (AP) — What was supposed to be a farewell season for Tony Kanaan instead turned into a disappointing tour of nearly empty race tracks.

Then he was offered another opportunity to extend his IndyCar career, this time in front of fans. His first two races are scheduled for this weekend at Texas Motor Speedway.

“That was actually one of the reasons I decided not to go away, not to retire, because it was so sad," Kanaan said. “I would have never thought I'd be in a race like the Indianapolis 500 and not have a single person sitting in the grandstands. But we need the fans, the sport needs the fans to survive, and I am excited to race in front of fans.”

Kanaan's second chance came courtesy of seven-time NASCAR champion Jimmie Johnson, who moved to IndyCar this year but only wanted to race the road and street circuits. That left four open ovals in the No. 48 at Chip Ganassi Racing and Kanaan was the perfect driver for the job.

He drove four seasons at Ganassi from 2014-17 with much of the same personnel he'll be working with on the No. 48 car when he races Saturday and Sunday.

Kanaan, who has a two-year deal with the team, tested with Ganassi at Indy earlier this month, but the team skipped the Texas test because it's confident in its package for the Fort Worth track. Scott Dixon led 157 of the 200 laps last year for a Ganassi win in what was the IndyCar season-opening race.

Kanaan scored a pair of runner-up finishes and a third at Texas as a Ganassi driver and was 10th last season for A.J. Foyt Racing.

Although he's not raced in the IndyCar Series since August, and Kanaan was supposed to be retired already, team owner Chip Ganassi said he doesn't view this reunion as the chance to give the 46-year-old Brazilian a proper sendoff.

“When it comes to TK it's about performance, it's about winning,” Ganassi said. “We want to be in a position to win with him in a car.”

Texas marks the third consecutive week of racing for the IndyCar Series — and a doubleheader, no less — and the first stop on an oval. It comes after last week's race on the street course in St. Petersburg, Florida, in high humidity that drained drivers who aren't yet at top race fitness.

Kanaan isn't exactly fresh. He raced a stock car in Brazil last weekend, then flew back to the United States to race in Texas. But where he separates himself is in preparation, he said, and he will be ready for 690 miles of racing over two nights at Texas.

“Some people say I'm a workout freak, but it's all about how you prepare,” Kanaan said. “Some of the drivers said how hot it was last week and that's why over the winter, every day I went to the gym, I did an hour inside of the sauna at 150 degrees. That's preparation. I like to say I'm a little bit better prepared.”

Pietro Fittipaldi wants to race wherever he can in whatever series has an open seat. His next opportunity comes at Texas in the IndyCar Series for his first races since the 2018 season.

Fittipaldi is driving the four ovals on the schedule for Dale Coyne Racing in the No. 51 car with Romain Grosjean, who drives the road and street courses. He's also the reserve driver for the Haas Formula One team and last year made his F1 debut in November at the Sakhir Grand Prix after Grosjean was injured.

Fittipaldi is the grandson of two-time F1 champion and two-time Indy 500 winner Emerson Fittipaldi. He has six career IndyCar starts, all in 2018 driving for Coyne.

“I want to end up with a full-time ride, that's the main goal,” Fittipaldi said. “I'd love to race IndyCar, not only the road courses but also the ovals. You need a lot of sponsorship nowadays, and hopefully I get something sooner rather than later, but I want to be patient and also persistent and find the right opportunity."

Fittipaldi tested earlier this month at both Texas and Indianapolis.

ODDS AND ENDS: More than 200 members of the IndyCar paddock have signed up to receive either their first or second shot after Sunday's race at Texas as part of the series' mass vaccination effort against the coronavirus. IndyCar owner Roger Penske has been cleared to host 135,000 spectators for the Indianapolis 500 and the vaccination drive helped him receive approval for what will be the largest sporting event since the the start of the pandemic. ... This weekend marks the oval debut for IndyCar rookie Scott McLaughlin, the three-time defending Australian V8 Supercars champion. ... Alex Palou is the current points leader, but only 40 points separate 18 drivers in the standings. Colton Herta jumped from 22nd to fourth with last week's win.