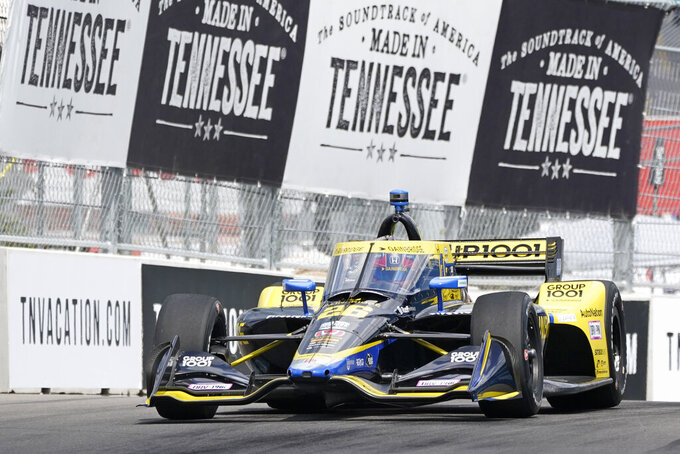 PORTLAND, Ore. (AP) — McLaren supports Colton Herta receiving an exemption to compete in Formula One next season, and Red Bull adviser Helmut Marko says a deal is in place to bring the American to the grid.

Any deal would be contingent on Herta, a 22-year-old IndyCar star from California, receiving an exemption from F1's governing body for the Super License required to compete, Marko told SiriusXM.

“Astonishingly enough, all of the parties and teams involved, we found an agreement,” Marko said. “First we have to get a definite answer (from the FIA) and I think it should be by Monza," site of the next F1 race.

The Dutch Grand Prix was rife with rumors and speculation that Herta is in line for a seat in 2023 with AlphaTauri, the junior team for Red Bull. That created spirited debate over the rules for licensing a driver and if Herta, winner of seven races over four IndyCar seasons, should be considered for an FIA exemption.

McLaren head Zak Brown told The Associated Press the team is in favor of the FIA clearing Herta to compete. Herta is under an IndyCar contract with Andretti Autosport through 2023 but has an F1 contract with McLaren through 2024.

Herta tested for McLaren in Portugal over two days in July and has been on the McLaren simulator.

“We have had Colton in our simulator and our F1 car for testing and are probably in a better position than anyone to give an opinion," Brown said. "Our opinion is that he would be a great addition to the F1 grid and is very deserving of a Super License.”

Drivers need to accumulate 40 points to obtain a Super License based on their best three performances over the previous four seasons. The FIA does not govern IndyCar or NASCAR, and as such, America’s top racing series don’t rate highly in the licensing system.

Herta is expected to have just 32 points ahead of 2023, and although he can gain points by participating in F1 practice sessions, he doesn’t currently have any sessions scheduled this year. Herta headed into Sunday's race at Portland International Raceway, the penultimate race on the IndyCar schedule, with one victory this year and ranked a career-low 10th in the standings.

But that McLaren was willing to publicly back Herta on an issue unrelated to its own immediate needs likely indicates that a multiteam agreement is in the works to get Herta onto the F1 grid. The last American to race in F1 was Alexander Rossi in 2015.

Under the likely negotiations referenced by Marko:

— Herta would be released from any commitments to McLaren, which on Friday won the rights to Alpine reserve driver Oscar Piastri.

— Alpine wants Pierre Gasly released from AlphaTauri, which would open the seat for Herta and give Alpine a replacement for Piastri, who was supposed to replace Fernando Alonso until the young Australian driver instead chose McLaren.

— Alpine would release Piastri before the end of 2022 so that McLaren can begin working with him before Jan. 1, in exchange for McLaren giving up all its rights to Herta to get the multiteam driver movement in motion.

Herta, for his part, previously told the AP that he's aware of all the speculation surrounding him but doesn't want to even think about his options until after next Sunday's season finale at Laguna Seca, where he's the two-time defending race winner.

His father, former driver Bryan Herta, handles his management and Herta said he told his dad to not discuss 2023 with him until after the IndyCar season ends. Bryan Herta respected those wishes before Sunday's race at Portland and shook his head, saying “Nope, nope, nope,” as an AP reporter approached.

Bryan Herta said he had heard about Marko's comment that a deal had been reached for his son to drive for Red Bull's junior team.

“A lot of people say a lot of things,” Bryan Herta said. “I've got nothing to say at this time.”