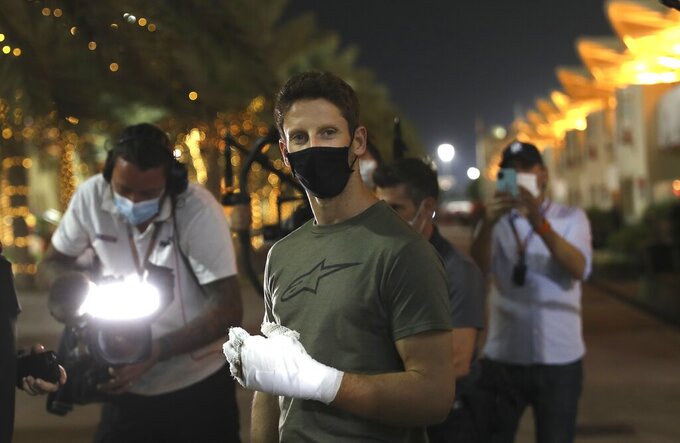 Haas driver Romain Grosjean of France arrives to paddock to thank the marshals Thursday, Dec. 3, 2020, in Bahrain International Circuit in Sakhir, Bahrain. Grosjean escaped with only minor burns when his Haas car exploded into a fireball after crashing on the first lap at last weekend's Bahrain GP. (AP Photo/Kamran Jebreili)

Formula One driver Romain Grosjean will not race at next Sunday’s Abu Dhabi Grand Prix and instead will fly home to Switzerland, where he will continue his recovery for the burns on his hands following a horrific crash at last weekend's Bahrain Grand Prix.

Grosjean had initially hoped he would recover enough mobility in his hands to compete in the season's finale, but he will again be replaced by Pietro Fittipaldi on Dec. 13, the Haas team said on Sunday. Fittipaldi was making his F1 debut later on Sunday at the Sakhir GP in Bahrain.

The 34-year-old Grosjean's F1 career may effectively be over since he was being replaced next season at Haas, with Michael Schumacher's son Mick coming in to begin his F1 career. The 21-year-old German won the F2 title on Sunday.

Grosjean made his F1 debut in 2009 and secured 10 podiums, twice finishing second. Last Sunday he somehow escaped after being trapped inside the Haas car for nearly 30 seconds after it exploded following a first-lap crash.

“It is with great sadness that I will not be able to do my final race in Abu Dhabi and be with the team there,” Grosjean said. “We’ve tried as much as we could with the doctor to recover and to repair my hand, but the risk of racing is too big for my recovery and my health. It’s one of the hardest decisions of my life, but it’s obviously one of the wisest."

“Romain has shown exceptional bravery and amazing spirit over the last few days. We know how badly he wanted to be able to return to the cockpit in Abu Dhabi,” Steiner said. “There is no doubting the determination and sheer effort he has put into helping us to achieve what we have as a young team in Formula 1. We will forever be grateful for that belief and commitment.”

The veteran had a strong season with Lotus in 2013, when he drove alongside 2007 F1 champion Kimi Raikkonen and secured six podiums, including three straight and a second place at the U.S. Grand Prix.

Grosjean's future is unclear since he will not be able to get an F1 seat next year. He previously expressed an interest in IndyCar racing, but the crash risk element is high in oval-track racing.

Grosjean, who has three young children, said in a television interview earlier this week that he was not as enthusiastic as he had been about the IndyCar series after reflecting on it following his horror crash.