Gragson wiggles past Allgaier to win Xfinity race at Bristol 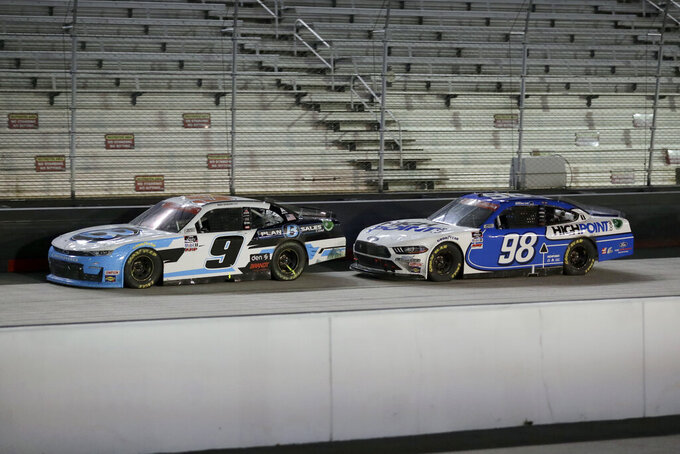 BRISTOL, Tenn. (AP) — Noah Gragson squeezed past JR Motorsports teammate Justin Allgaier with four laps remaining, a move that caused Allgaier to crash, and Gragson held on at Bristol Motor Speedway for his second win of the season.

Gragson also won the season-opening race at Daytona to begin his second year with Dale Earnhardt Jr.'s race team. Gragson was winless in 2019 in his first full season in NASCAR's second-tier series.

His victory Monday night was set up by a caution with 13 laps remaining that wiped away Allgaier's lead. The Chevrolet teammates lined up side-by-side for the restart with seven laps remaining but Allgaier cleared him on the restart.

Gragson chased him and as he passed Allgaier for the lead, Allgaier wiggled into the wall and crashed for a caution.

“I really apologize to Justin and the (number) 7 team, that’s not how I want to race,” Gragson said. "I saw a position open up, he kind of slipped off the bottom and I tried to slip to the bottom and I just got too loose.

“This track is like ice right now. We are slipping and sliding.”

Gragson had to race Chase Briscoe and Brandon Jones in a two-lap overtime finish but beat them both to claim the checkered flag. Gragson climbed the fence at empty Bristol in celebration.

He joined Briscoe as the only drivers with two Xfinity Series victories this year and praised crew chief David Elenz for sticking with him and helping him improve at Bristol. He had one top-10 in two Xfinity races at Bristol last year, and one top-10 in a pair of visits to the bullring in the Truck Series in 2018.

“I was terrible here in trucks and Xfinity,” Gragson said. “My crew chief chief believed in me and he wanted me to come back and run with them and Dave Elenz is the man.”

Allgaier led a race-high 156 laps but finished 18th after the wreck.

“I’m more mad at myself for making a mistake and getting off the bottom,” Allgaier said. “But, yeah, we got wrecked.”

Briscoe, who beat Kyle Busch to win at Darlington two weeks ago, finished second in a Ford.

Jones and Harrison Burton were third and fourth in a pair of Toyota's. The top four are eligible to race for a $100,000 bonus Saturday at Atlanta Motor Speedway.

Myatt Snyder rounded out the top-five.