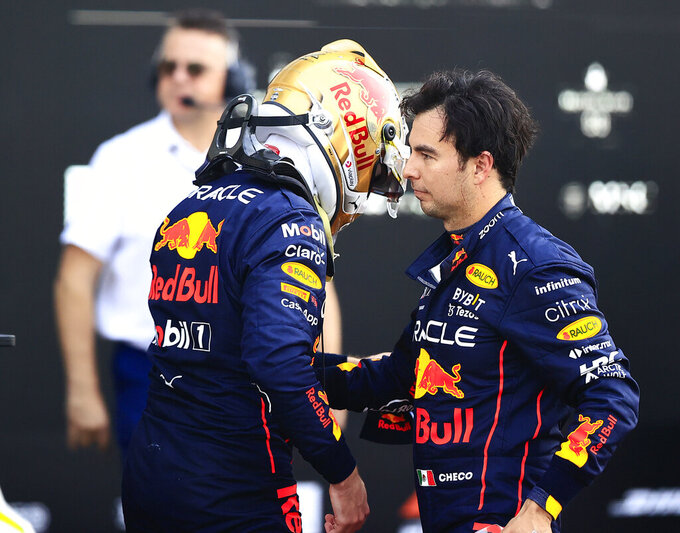 Red Bull driver Max Verstappen, of the Netherlands, left, and teammate Sergio Perez, of Mexico, greet each other at the end of the qualifying run of the Formula One Mexico Grand Prix at the Hermanos Rodriguez racetrack in Mexico City, Saturday, Oct. 29, 2022. Verstappen won pole position and Perez cam in fourth. (Carlos Perez Gallardo/Pool via AP)

The phrase made its way onto merchandise, and some began referring to Perez as “Mexico’s Minister of Defense" for his commitment to aiding his two-time F1 world champion teammate.

The camaraderie apparently has fractured in the year since Verstappen beat Hamilton at Abu Dhabi to win his first F1 title. Verstappen steadfastly refused to help Perez on the final lap Sunday of the Brazilian Grand Prix, where Red Bull asked the Dutchman to pull over and give Perez sixth place.

Perez needed the spot because he's in a fight with Charles Leclerc of Ferrari for second in the final F1 standings, which will be decided in this Sunday's season finale at Abu Dhabi. Verstappen's defiance left Perez and Leclerc tied in the standings; had he given up the spot, Perez would hold a two-point advantage.

The radio transmissions between Verstappen and Red Bull raised eyebrows, as did the later images of team boss Christian Horner huddled in the team's hospitality suite with his drivers, trying to tamp down a dramatic refusal of team orders that could tarnish Red Bull's incredible season.

Verstappen's reply was curt: “I told you already last time. Don’t ask that again to me. Are we clear about that? I gave my reasons and I stand by it.”

On the Perez channel, Horner immediately apologized to the Mexican driver. Perez simply replied: “It shows who he really is.”

It was a bad look for the 25-year-old Verstappen, who already has a reputation for unapologetically doing whatever he wants at Red Bull. Now he's seemingly put himself above the team and the only logical reason could be out of spite.

After all, Verstappen wrapped up his second F1 title with four races remaining. He and Perez helped Red Bull win the constructors championship with three races remaining, and Verstappen set the single-season record for wins in a season with 14 victories and can add to that total.

Two races ago in Mexico City, where Perez desperately wanted to become the first Mexican to win his home race, Verstappen said in advance that he would not move out of the way to help his teammate reach that goal. Verstappen went on to win his record-breaking 14th race while Perez finished a disappointing third.

Why quibble over sixth place in Brazil?

Perez was stunned and grumbled after the race that he helped Verstappen win his back-to-back titles and has been the consummate No. 2 teammate. There were at least eight instances of Perez running interference for Verstappen in last year's nail-biting title race with Hamilton.

It has continued this year, too, when Perez followed Red Bull orders at the Spanish Grand Prix in May to let Verstappen through to win the race. Perez even has supported Verstappen off the track: When the Dutchman boycotted official broadcast partner Sky Sports F1 two weeks ago at the Mexico City Grand Prix, Perez joined him and didn't speak to the network, either.

There was postrace speculation in Brazil that frustration has been simmering since Monaco in May because Verstappen believes Perez intentionally crashed at the end of qualifying. Perez won the race, Verstappen finished third and Verstappen apparently hasn't let it go over five months, despite picking up 10 more victories.

Red Bull claims that Monaco did not even come up in Sunday's postrace peacekeeping session.

Red Bull is determined to go 1-2 in the drivers' championship standings for the first time in its history, but Verstappen's defiance has made Perez's job far more difficult this weekend in Abu Dhabi.

Horner said his drivers shook hands Sunday after their team meeting, but precedent has been set by Verstappen that Red Bull team orders are optional.

“If we go to Abu Dhabi and he needs the points, because they’re tied, it’s not the end of the world, it’s all about who finishes ahead anyway. If he needs the help, I’ll be there,” Verstappen said. “But it’s good that we talked about it now and basically cleared everything that was there.”

Horner insisted that Verstappen has given “his commitment” to helping Red Bull finish 1-2 in the standings. But it remains to be seen what happens in Abu Dhabi.

“It’s a straight fight between Checo (Perez) and Charles, and if Max can help in any way he will,” Horner said. "We discussed it as a team, we discussed it behind closed doors. We’ll discuss it in a larger group later. It’s all dealt with above the table and we move on.”