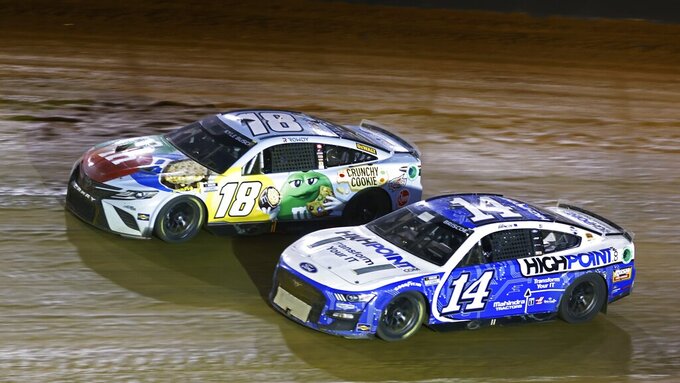 BRISTOL, Tenn. (AP) — Credit must be given to NASCAR for at long last shaking up the status quo and trying new things, no matter how outlandish the idea.

Progressive thinking is how the Cup Series wound up back at dirt-covered Bristol Motor Speedway for a second consecutive year, this time racing late into the night on Easter Sunday — a previously taboo date for a sport deeply entrenched in the Bible Belt.

The first edition of Bristol dirt last year had its challenges. The 2,300 truckloads of red Tennessee clay at first turned to mud and blacked out the driver windshields. When the dirt dried out, it turned the bullring into a blinding dust bowl. Heavy rains also pushed the race to the next day.

Drivers did their best with the weird and unfamiliar conditions, and even before the inaugural Bristol dirt race was over, Speedway Motorsports announced it would do it all over again in 2022.

It was the same vibe over the weekend, only this time the drivers weren't pleased to have lost their annual holiday weekend and that contributed to their disdain over reconfiguring a perfectly racy concrete short track into a dirt track.

After watching attendance for its spring race plummet over the last 15 years, Speedway Motorsports CEO Marcus Smith was willing to spend the money on the experiment, which became a made-for-TV event when Fox Sports successfully pushed for the race to fill a holiday primetime slot. A full day before the green flag even fell, Smith was confident dirt would be back at Bristol in 2023.

“Dirt has been voted on by the fans, and they told us by their ticket purchasing that they want dirt back at Bristol,” Smith said Saturday of the projected attendance Sunday.

Except that the crowd wasn't all that spectacular — maybe better that what Bristol had been getting for its spring race in the years leading into the pandemic — and as veteran driver Kevin Harvick noted all weekend, the entire effort will have been an incredible waste of time if Fox Sports fails to deliver a strong television rating.

It didn't help that the race was delayed twice by rain, and Harvick was mortified when NASCAR had to call a caution so drivers could have the mud cleaned off their windshields. "We all look like a bunch of bozos coming in to pit because we don’t know how to prep the track," he said.

Even the winner had mixed feelings.

Kyle Busch backed into his first victory of the season when he skirted past the spinning lead cars of Tyler Reddick and Chase Briscoe headed into the final turn. Reddick was going to win before Briscoe made him spin. Busch wound up with tying Hall of Famer Richard Petty in winning a race for the 18th consecutive year.

“You saw what it’s like on the last corner, the last lap, to drive around here every single lap,” Busch said of winning on dirt. "You’re just not breathing because you’re so tensed up of not crashing. If it’s a good show, it’s a good show. I think Bristol is fine with or without (dirt).”

Adding a dirt track to the Cup calendar was initially an attempt to add variety to a schedule that had grown but not changed much since NASCAR's 1949 inaugural season.

But this year was clearly about television. NASCAR had raced on Easter 10 times before, but all were weather-related reschedules and never deliberately marked for a holiday. It was Fox Sports that said NASCAR should seize the day the way the NFL does on Thanksgiving and the NBA on Christmas, even if it meant cutting the 38-race Cup schedule from February to November to just one off weekend.

The problem with making Bristol on dirt a television event is that any new viewers won't see another race like it the rest of the year. It is an anomaly, not even close to what NASCAR does every week.

Harvick said it was “ridiculous" and even reigning series champion Kyle Larson, arguably the best dirt racer in the country, thought NASCAR should be racing on Bristol's concrete. The track goes back to asphalt for its fall playoff race.

“I think everybody assumes my opinion would be to race dirt every weekend, but no I don’t think Cup cars should be on dirt,” Larson said.

At least half the field also proved to be unclear of the rules during the first rain delay. NASCAR had told teams in its pre-race rules video that, unlike all the other races, scoring would be paused at the end of the stages. Despite the advisory, the teams were dumbfounded at the end of the second stage when Briscoe pitted from the lead and was still scored the leader over Busch, who stayed out to cycle to the front.

Winning crew chief Ben Beshore said he did watch the video but clearly didn't understand the rule and “I’ve been in Xfinity or Cup for 18 years.”

It was never pretty on Sunday, despite the exciting finish and the claims from some drivers that they actually enjoyed the race. They’ve been there, done that twice now, and NASCAR’s gimmick is quickly growing tired.