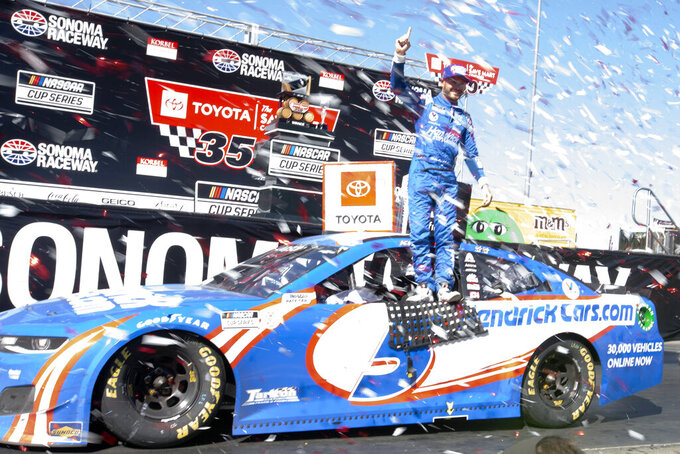 Fast facts: Larson has won the last two races and matched Truex for the series lead with three victories this season. He trails winless points leader Denny Hamlin by 47 points. ... Hendrick Motorsports drivers have finished 1-2 in the last four races. ... Elliott in third in points, 73 behind. ... Hamlin (7) and Kevin Harvick (9) combined to win 16 races last season but both are winless through 16 races this year.

Last race: A.J. Allmendinger rallied from 19th place with 21 laps to go and won at Mid-Ohio, matching Marcus Ambrose's record for the most road course wins in series history.

Fast facts: Allmendinger's victory was his fifth on a road course and second overall this season. He's second in the points race, 96 behind Cindric, the defending series champion. Daniel Hemric and Harrison Burton are both 121 points back and Jeb Burton is 139 behind. ... Cindric leads all drivers with three wins, nine top-five finishes and 10 top-10 finishes through 13 races. ... rookie Ty Gibbs posted his sixth top-5 finish in seven starts.

Fast facts: Nemecheck leads two-race winner Ben Rhodes by 44 points in the standings with Austin Hill 98 behind. Defending series champion Sheldon Creed is 106 back and Todd Gilliland is 116 behind. ... Hill is the only driver in the top five without a victory this season, ... Series regular have won seven of the 10 races this season with Cup Series regulars Busch (2) and Truex claiming the other three.

Fast facts: Alex Palou leads Scott Dixon by 36 points in the standings. Palou is the only driver with three top-three finishes. ... Particio O'Ward is third in points, 37 behind, while Simon Pagenaud is 47 behind and Rinus VeeKayis 57 back.