Another virus case at Mercedes ahead of Eifel Grand Prix 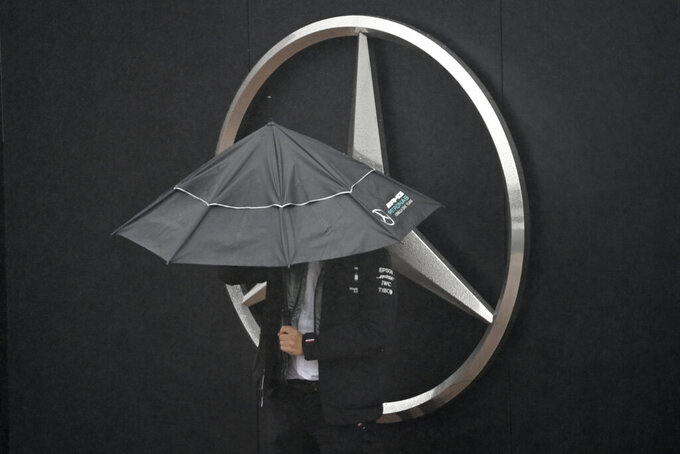 A man shelters from the rain under an umbrella next to a Mercedes logo during the second practice session for the Eifel Formula One Grand Prix at the Nuerburgring racetrack in Nuerburg, Germany, Friday, Oct. 9, 2020. The Mercedes team has found a second coronavirus case among its staff at the Eifel Grand Prix and flew in emergency replacements Friday ahead of this weekend's Formula One race. (Ina Fassbender, Pool via AP)

NÜRBURG, Germany (AP) — The Mercedes team found a second coronavirus case among its staff at the Eifel Grand Prix and flew in emergency replacements Friday ahead of this weekend's Formula One race.

Following a positive test on Thursday, Mercedes said the entire team at the Nürburgring was retested. That produced one positive result and another described as “inconclusive," which requires another test.

Those people and other staff who had contact with them are in quarantine, and six replacements have flown in from the team's base in Britain, team principal Toto Wolff said.

“Every loss of an important member in a garage affects a race, but I think we got it under control by having backup in Brackley and they came in," Wolff said.

Mercedes drivers Lewis Hamilton and Valtteri Bottas have minimum exposure to the other team staff because “it is really critical for the championship if you miss a race or two," Wolff said.

“The drivers are the most restricted of the whole group, of the whole team. Certainly not a great situation for them because you almost have to live like a hermit,” he said.

Wolff said debriefs are carried out by video conference so “they’re not sitting with the engineers in the room, they’re in their own rooms.”

Racing Point's Sergio Perez is the only driver to have tested positive for the virus this season. He missed two races in Britain in August and Nico Hülkenberg stepped in as a replacement.

Hamilton said Thursday that the first case at Mercedes was a reminder to take precautions against infection.

“It’s obviously important for everyone around the world to know ... to be continuously reminded that this thing has not disappeared. It’s still here,” he said. “We still need to continue to follow protocols. And wear masks. And keep our hands clean, keep our distances.”