In wild NASCAR year, Chase Elliott is steady as a rock 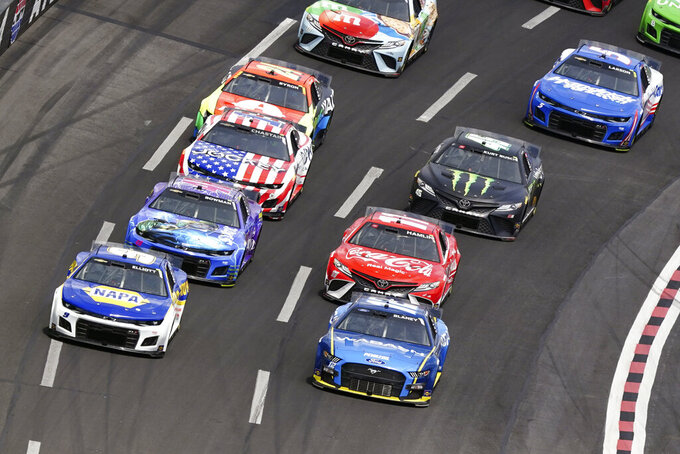 HAMPTON, Ga. (AP) — Sure, it’s been a wild NASCAR Cup season, with seemingly everyone in the field capable of taking the checkered flag.

Through all the chaos, one driver has emerged as the clear favorite.

Chase Elliott is the guy everyone else is chasing.

The 26-year-old became the first three-time winner in the Cup series with a thrilling victory at his home track Sunday, making a timely block on the final lap to fend off Corey LaJoie's bid to become the most unlikely winner yet in a year filled with surprises.

Elliott checked off another box on his increasingly impressive resume with the win at Atlanta Motor Speedway, joining his father Bill as the only Georgia-born drivers to take first at the historic track.

That made for a raucous celebration in front of the main grandstand, where Elliott celebrated with a crowd that cheered every move by the No. 9 Chevrolet.

But setting emotions aside, it was another masterful performance by NASCAR's steadiest driver — the kind that have become the norm rather than the exception.

“I just saw a look in his eye all day,” said four-time Cup champion Jeff Gordon, now the vice chairman of Hendrick Motorsports. "You could hear it in his voice over the radio. He was just very focused and determined.”

Elliott won the first two stages of the Atlanta race. He led 96 of the 260 laps, more than twice as many as anyone else on the treacherous, high-banked track. And at the end, after surging by LaJoie with just under two laps to go and taking the white flag still out front, he aggressively slid up the track going into Turn 1 to prevent LaJoie from pulling off the same move.

LaJoie, with only one top-five finish in his career, stayed on the gas, ran out of room and smacked the wall. Elliott sped away unscathed, his victory assured as soon as the yellow flag came out.

“Just a lot of motivation behind it and confidence coming into it," Gordon said. "And now the confidence is only going to build along with the team. That's a great combination to have at this point in the season.”

Elliott was a bit apologetic about his closing move, but LaJoie had no complaints.

It was just good, hard racing — and Elliott is as good as anyone in that department.

“I hate to throw a megablock like that," he said. “But, heck, we're on the last lap. ... The guy is coming with a massive run. Am I taking a chance of crashing when I threw it up in front of him? Absolutely. But I didn't think I was going to get another shot at him if I let him grab the lead right there.”

In addition to his wins at Dover, Nashville and Atlanta, Elliott has a runner-up finish at Road America, a fourth-place showing at Circuit of the Americas and a fifth-place result from Darlington.

He has seven other top-10 finishes and just missed another with an 11th at Phoenix. He has only placed outside the top 20 four times in 19 races.

What makes Elliott's performance even more impressive is that it's come in a season with 13 different winners already, including five drivers claiming their first career victory.

“There have been a lot of winners,” Kurt Busch said, “but Chase Elliott has been that consistent rock.”

With a comfortable lead in the point standings and a playoff spot all locked up, Elliott surely has his sights on a second Cup championship to add to the one he captured in 2020.

But crew chief Alan Gustafson said it's far too soon to start looking ahead. There's still seven races to go in the regular season, beginning with next weekend's event on the 1.058-mile oval at Loudon.

“A lot of things can happen,” Gustafson said. “Just focus on trying to improve. There's still things we can do better.”

Of course, the Dawsonville native had a similar record on his home track before Sunday's victory.

Sporting a mustache that appears modeled after Atlanta Braves rookie pitcher Spencer Strider, Elliott hopes to carry on what's been a winning run for sports in his home state.

A few weeks ago, Elliott made a promotional appearance in Atlanta with both teams' championship trophies, along with the Cup he won two years ago.

“The way the fans, the way the Atlanta Braves organization and the University of Georgia have all just kept me as part of the family is really special and meaningful to me,” Elliott said. “Ultimately, I'm just a fan of them. I've grown up watching them. I think it was really cool to include me and my team.”

Actually, he fits right in.

Who knows? Elliott may have another trophy to display before the year is done.