‘Way too fast for us’: Can Mercedes catch up with Red Bull? 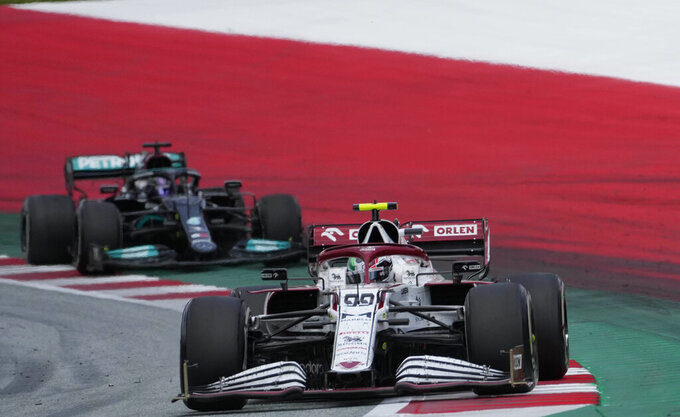 SPIELBERG, Austria (AP) — Mercedes is losing ground on Red Bull this season after another disappointing performance.

And losing it fast.

Mercedes, the winner of all seven constructors’ championships in Formula One since 2014, went a fourth straight race without victory on Sunday. Seven-time F1 champion Lewis Hamilton only saw the rear end of Max Verstappen’s car at the Styrian Grand Prix — the home track of Red Bull — with the championship leader easily winning.

To make things worse for Mercedes, the next race is the Austrian GP at the same track in seven days' time.

“They were way too fast for us,” said second-place Hamilton, adding that “straight-line speed” is where Red Bull has its advantage.

While Mercedes won three of the first four races of the season, it has been all about Red Bull since then, with Verstappen winning three times and Sergio Perez once.

“Much of this season has been a pretty good battle between the two of us with a very, very close performance of the cars,” Hamilton said about his duel with Verstappen.

“But obviously that has shifted,” he added.

On Sunday, Verstappen started from pole and stayed ahead throughout, finishing a massive 35 seconds ahead of Hamilton and nearly 47 ahead of Mercedes' Valtteri Bottas.

With Hamilton trailing leader Verstappen by 18 points in the drivers’ standings, and Mercedes lagging 40 points behind Red Bull in the constructors' standings, what can Mercedes do to turn the tide after eight of 23 scheduled races?

“If we are not going to develop and improve our car for the rest of the year, this is the result you’re going to see.”

Not that Hamilton has high hopes of any major improvements coming to his car any time soon.

“Naturally, we would love to have upgrades and improvements, but I don’t think that’s currently on the cards,” he said.

Mercedes is already planning for next year, when significant changes to the sport’s technical regulations are expected. They were initially intended for 2021, but have been delayed because of the coronavirus pandemic.

Team principal Toto Wolff confirmed Sunday that Mercedes will not switch back its focus to the current season and bring major updates to this year's car.

“A few details will come, but we are not coming up with a brand new wing,” Wolff said.

“I don’t know what’s going on with other teams but, of course, from our side we do improve our car almost every race,” Verstappen said.

“You always want to try and improve every single weekend. Even a weekend like this, it looks amazing when you won by a big margin, but it's never good enough.”

The fighter he is, Hamilton won’t give in easily, though.

“We still got many races ahead of us and we need to keep pushing,” he said. “We are world champions and we can definitely improve if we put our minds to it.”