IN THE PITS: NASCAR off to fast start through first month 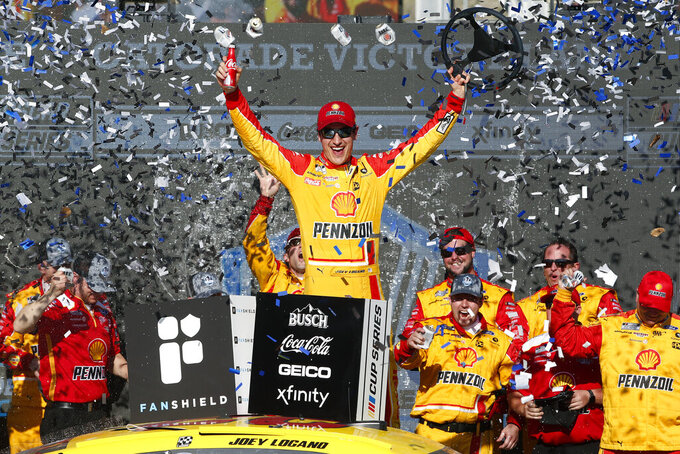 A busy first month for NASCAR came to a close with a three-race West Coast swing marked by both a surprise appearance from injured driver Ryan Newman and a successful preview of the rules package that will decide this year’s Cup Series champion.

Attention has been fixed on the sport since Newman’s terrifying accident on the final lap of the Daytona 500 last month raised questions about the safety of the sport and the sanity of its competitors.

What initially appeared to be NASCAR’s first fatality in a Cup race since Dale Earnhardt was killed in the 2001 Daytona 500 instead was what Newman called “a miracle.” He walked out of a Florida hospital less than 48 hours later and made the trek to Phoenix last weekend to support his Roush Fenway Racing team.

Newman’s crash brought new eyes to the series and presented an opportunity to kick-start the story lines that will follow NASCAR into November. Most important was the action Sunday at Phoenix Raceway, which will host the championship finale for the first time. A new rules package introduced last season ruined the racing at short tracks and the snoozefest at Phoenix last year forced the issue for NASCAR.

With a new venue set to host the championship race, NASCAR could not afford a lackluster affair. The series reduced the size of the rear spoiler, Goodyear worked on an improved tire and the traction compound typically applied to racing surfaces was altered. It made for a far more entertaining race won by Joey Logano, who rallied after falling to 18th on a botched pit stop.

“I think everyone in this whole facility took a sigh of relief,” said Logano. “Even if we didn’t win I would have said that was a pretty cool race.”

Logano won for the second time in four races as he benefits from a major offseason shuffle at Team Penske. All three Penske drivers swapped crew chiefs and Logano got Paul Wolfe, who won a championship with Brad Keselowski. The pairing already has two Cup wins, a guaranteed spot in the playoffs and a victory in a Daytona qualifying race.

Ryan Blaney also seemed to do quite well in the swap. He had the opportunity to win the first three races of the season, including finishing second to Denny Hamlin in the second-closest finish in Daytona 500 history.

It was contact from Blaney that triggered Newman’s crash but both have bounced back, and Blaney went to Phoenix as the Cup Series points leader. He became the first driver on a long list of free agents to take his name off the market, signing an extension to remain with Penske another three years.

Keselowski has not seen the same benefits from the Penske shakeup. His best chance at a victory came Sunday at Phoenix when he didn’t pit to take a late lead, but his worn tires didn't hold up and he had to give up track position for a stop before overtime. He wound up 11th after leading 82 laps. NASCAR’s 2012 champion is a free agent who has not started serious contract talks with Penske; a changing market rate and his own performance will dictate what kind of deal he ends up with.

Hendrick Motorsports will have at least one opening at the end of the year when Jimmie Johnson calls it quits on full-time NASCAR racing and Keselowski may test the market for a shot at the No. 48 Chevrolet with his former team. But Hendrick got some breathing room two races ago when Alex Bowman, another free agent, won at California to prove he wants to keep his seat. If Rick Hendrick can get a deal done with Bowman and limit his job openings to the No. 48, he may not need to spend the money on a veteran such as Keselowski.

Hendrick is also aided by an apparent improvement in the Camaro the Chevrolet teams are driving this season. Rolled out in 2018, the car simply wasn’t competitive and Chevy has failed to put a driver in the final four championship round the last two years.

Bowman got Chevrolet a victory in just the third race of the season (it took 10 races last season) and showed the Camaro modifications have given the Chevy teams a chance to compete. It’s most evident for Johnson, the seven-time champion who had back-to-back top-seven finishes out West. His fifth-place finish at Las Vegas was his first top-five since Daytona last July.

It is not clear is if there is a drop-off at Joe Gibbs Racing or others have simply closed the gap. Gibbs drivers won a record 19 of 36 races last season and the championship, but Hamlin's victory at Daytona is the only win so far for the Toyota group.