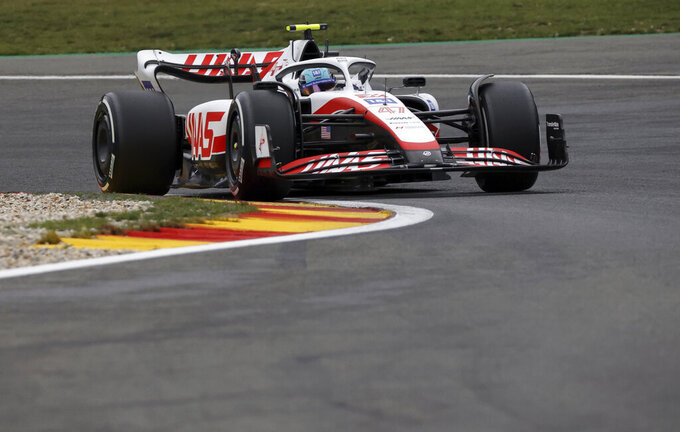 Mick Schumacher declined several opportunities on Thursday to discuss his future in Formula One amid speculation he'll be dropped by Haas at the end of the season.

The son of seven-time F1 champion Michael Schumacher is in his second season with Haas, where he was promoted to from the Ferrari Driver Academy. He's been associated with Ferrari since 2019 after winning the European F3 championship.

Schumacher's contract with the the academy is set to expire at the end of this year and Haas, which has an engine partnership with Ferrari, would not be obligated to keep the 23-year-old German if Schumacher is no longer part of the program.

Schumacher was asked ahead of the Dutch Grand Prix if he planned to stay at Haas for a third season; if he was talking to other teams; and, “what do you see as the pros and cons of what you do going forward?”

He skirted all three questions.

Schumacher remained stone-faced when asked directly if he wanted to speak about his 2023 plans, and passed on two other questions about his future. The first asked about any conversations he’s had about remaining part of the Ferrari Driver Academy.

“I think in that sense what is being discussed behind the scenes between us is something that is between us, and I would rather keep between us and not speak publicly,” he said.

Schumacher later said “that’s contractual matters, which I can’t go into detail with," when asked about his future on the F1 grid. If Haas does not retain Schumacher for next season and he's unable to find another seat, the grid would lose both its German drivers because four-time champion Sebastian Vettel is retiring.

Schumacher was publicly put on notice earlier this season by Haas team principal Guenther Steiner to pick up his performance. He missed the second race of the season when he crashed in Saudi Arabia and was taken briefly to the hospital for evaluation. Schumacher also crashed out at Monaco.

He at last scored the first F1 points of his career in July at the British Grand Prix by finishing eighth at Silverstone. Schumacher was sixth the next race in Austria and has a total of 12 points. Kevin Magnussen, who returned to Haas this season after a one-year parting, leads F1's only American team with 22 points.

Schumacher, meanwhile, has regressed since his back-to-back breakout races. He was 15th in France, 14th in Hungary and 17th last week in Belgium. Schumacher ranks 15th in the 20-driver standings.

Should he lose his current seat, there aren't a ton of options for Schumacher. Daniel Ricciardo has been bought out of his contract at McLaren and is looking for a job and McLaren is hoping to win a fight with Alpine to use Oscar Piastri, the Alpine reserve driver, to fill Ricciardo's seat.

Schumacher did receive one endorsement on Thursday when Alpine driver Esteban Ocon said he's made it clear to the team that Schumacher is his choice to replace Alonso.

“My choice if I had anything to say would be Mick if he doesn't have anything lined up for next year,” Ocon said. "Mick is a good friend of mine, so if I can help on that, that's no problem. I think he has shown talents in the junior categories.

“He's been very fast, you know, sometimes in Formula One. It's not easy to perform with a car that's a bit on the backfoot, and he's a great guy and he could perform very well if he joined a competitive car and at the moment Alpine is competitive.”