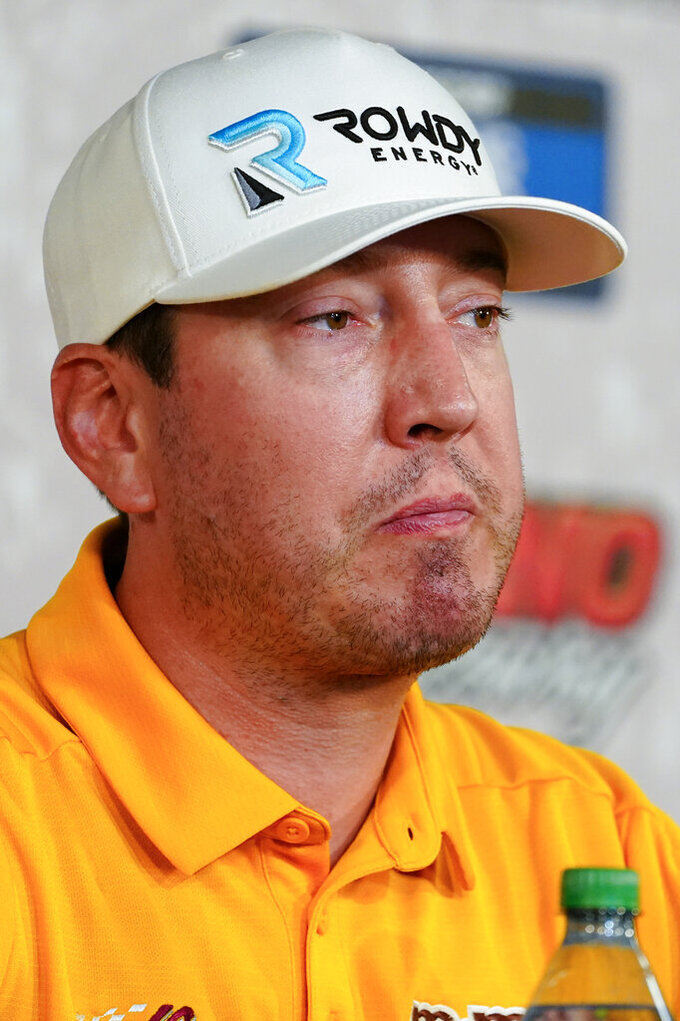 NASCAR Cup Series driver Kyle Busch answers questions at a news conference between series races and Cup qualifying at Pocono Raceway, Saturday, July 23, 2022 in Long Pond, Pa. Busch's deal with Joe Gibbs Racing expires at the end of the season and the two-time Cup Series champion is getting antsy for a new deal. (AP Photo/Matt Slocum)

INDIANAPOLIS (AP) — Kyle Busch started his Saturday by joining past winners at the hallowed Indianapolis Motor Speedway for a class photo on the Yard of Bricks.

He was seated next to Arie Luyendyk, in front of Marcus Ericsson, Alexander Rossi and Helio Castroneves — a combined eight Indy 500 titles flanking NASCAR's only active driver with multiple Cup championships.

And yet Busch still doesn't have a contract for next season. His longtime sponsor is pulling out of NASCAR at the end of the season, and if Joe Gibbs Racing doesn't find a deep-pocketed replacement for M&M’s and Mars Inc., Busch will have to find a job elsewhere.

It's an unfathomable predicament for Busch, the 2015 and 2019 NASCAR champion and winner of 60 career Cup races, with all but four won since joining JGR in 2008. He wants to stay in the No. 18 Toyota, but the clock is ticking.

“It'd be like Dale Earnhardt in 1998, three or four years after winning his last championship, being on the free agency market and not having a ride. That just sounds crazy,” Busch said. “I don't know what to do, how to fix that.”

Despite his credentials, Busch knows he's going to have to take a pay cut. The motorsports business model relies on corporate funding, and the market is radically different than it was when he signed his first deal with Gibbs in 2007 and even when he signed his last extension in 2019.

“You talk about what you want, and I think you are insinuating that I'm asking for the sky on salary or something like that, and I've already admitted I'm willing to take concessions,” Busch said. "I feel like the market is different than what it was years ago, and I'm willing to race for under my market value.

“You gotta have sponsorship in this sport to go forward. It's not as simple as being a basketball player and being Michael Jordan or LeBron James and being a really good player, and then the team losing a sponsor and then saying ‘OK, Michael, LeBron, we gotta let you go. We can’t afford you.'"

Busch acknowledged that the stress has made for “a lot of sleepless nights” as NASCAR heads into Sunday's race at Indianapolis Motor Speedway. NASCAR will race the road course for the second consecutive year; Busch finished 20th last year, but won back-to-back Brickyard 400s on the oval in 2015 and 2016.

Busch has one victory this season and is playoff eligible. But his current organization, JGB, was rocked when Denny Hamlin and Busch were stripped of their 1-2 finish Sunday at Pocono Raceway because their Toyotas failed inspection — an escalation because the series won’t tolerate any nonsense with its new Next Gen car.

"It’s excessive for what it was, but I get the process for the car and making sure the example is out there,” Busch said of the suspension.

So typically bold and brash, Busch was more muted on that and almost all topics because he's clearly concerned about what's next in his racing career.

He said he's talking to teams all across the NASCAR garage and can't even keep all the conversations straight. He knows he has the skills to step away from full-time NASCAR racing and craft a schedule of bucket-list races across multiples series, but it's probably a last-ditch option.

Busch wants to keep his seat at Gibbs, end of story.

“My first goal is to be at Joe Gibbs Racing and be with Toyota and have nothing change,” Busch said. “If the musical chairs music stops and I'm still standing, and I don't have a seat, I'm screwed. So I have to continue to talk and evaluate each place and each situation and find something.”

Indianapolis is hosting a shared event between NASCAR and IndyCar this weekend, and the speedway staff used the opportunity to gather as many living winners as possible for the group photo.

It made for a therapeutic Saturday for NASCAR star Ricky Rudd, the one-time Ironman who essentially left the sport behind when he retired at the end of the 2007 season. His appearance was the first time he'd been to a track since calling it quits.

Rudd had been at an air show in Wisconsin with a friend when IMS president Doug Boles reached out to him about the photo.

“So yesterday at 3 o'clock we pulled in and here we are,” said Rudd, who mingled with his former rivals and met Mario Andretti for the first time.

Rudd won 23 races over a 33-year career and held the mark for consecutive starts at 788 before Jeff Gordon broke the record in 2015.

Erik Jones and Petty GMS announced a multi-year extension for Jones to continue driving the No. 43 Chevrolet.

Jones joined Richard Petty Motorsports in 2021 and stayed in the car this season when GMS Racing and RPM merged. He has seven top-10 finishes this season and is 18th in the standings.

“I’m really excited to have this deal done and finally be able to talk about it,” Jones said. “Each week I feel like we get better and better and put ourselves in contention to win. Knowing where I’ll be driving allows us to really focus on building the team and making our cars better.”

Tyler Reddick won the pole in Saturday qualifying, bettering Austin Cindric by 0.252 seconds to get his second career pole. Chase Briscoe qualified third and was followed by Christopher Bell and Joey Logano. ... Hamlin said he brought the trophy from Pocono to IMS to give to Chase Elliott, who was deemed the winner despite finishing third. “It will be transported to Chase. I told Chase and we had some good texts back and forth.”