Johnson watches Indy 500 from sideline itching to get in car 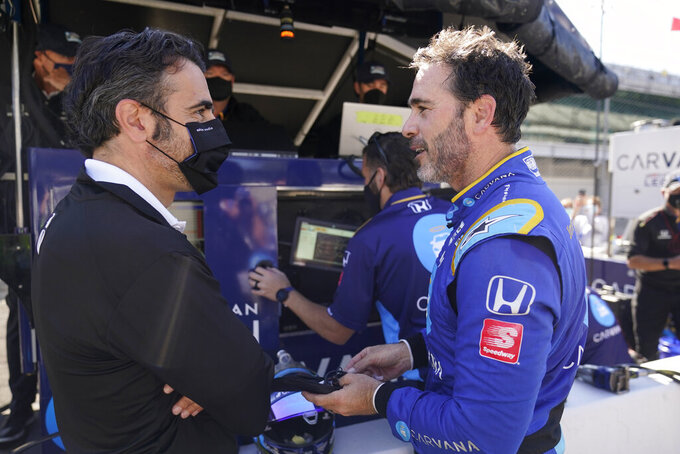 INDIANAPOLIS (AP) — Jimmie Johnson was inside a sauna at 120 degrees and climbing as part of an hourlong sweat session prepping him to race on hot summer days. It's part of a fitness program that calls for mental exercises to be completed while roasting inside the sweat bath, but Johnson was knocking out phone calls instead.

He wanted to talk Wednesday about his first weekend at the Indianapolis 500, where the seven-time NASCAR champion was part of the NBC Sports broadcast team over two days of qualifying. Johnson had never before attended any part of the Indy 500.

Had rules permitted, he just might have kicked Tony Kanaan right out of his car.

“I knew it was going to go one way or the other, I was either going to be totally against oval racing or see that the next realistic step is a test session,” Johnson told The Associated Press.

What he learned last weekend is that the driver approach to the Indianapolis 500 is not unlike how his NASCAR peers head into races at Daytona and Talladega, where speeds are higher and crashes common.

“I have in my mind that these IndyCar drivers enter these oval races like we do a restrictor plate race and it's a much more calculated and conservative approach in an Indy car due to the risks, due to the speeds," Johnson said. “I'm understanding the environment a lot more and becoming more comfortable. I don't know about Texas Motor Speedway, but for the Indy 500 itself, I'm definitely becoming more comfortable.”

Johnson will be back this weekend as part of the NBC crew to analyze the Indy 500 and watch his four Ganassi teammates attempt to win Sunday. All four qualified inside the first three rows, with Scott Dixon on the pole and Kanaan, the oldest driver in the field at 46, starting fifth.

The irony is that Kanaan might not even be in the race if not for Johnson's wild idea to retire from NASCAR and make a move to IndyCar at the age of 45. But Johnson only wanted to do road and street courses, which left four oval races open for the No. 48 Honda.

Kanaan expected to be retired from IndyCar this season, but Johnson recruited him for the ovals. Now the Brazilian is a contender for a second Indy 500 victory with a strong week around Indianapolis Motor Speedway.

Kanaan has a renewed energy to him this month — even as he's joked Johnson is looming over his shoulder, likely wanting the car back immediately.

“I let my beard grow so Jimmie wouldn’t feel that old. I know how much he’s suffering,” Kanaan said. “The better that I do, the more Jimmie is going to want to get in the car. I can see that. It might be my last year running the 48 probably, if it goes the way it’s going.”

Johnson is no longer on the fence about, at minimum, testing on an oval and determining if that gets him an Indy 500 seat next year. This current arrangement with Ganassi for both Johnson and Kanaan is two years, and Kanaan is thriving.

“We know he's super good and we know he's one of the guys to beat and we know he loves this race to death,” said Dixon. “The whole program when it came together, it was just the perfect fit for Tony and no one has had any doubt that he was going to be fast as hell at Indy. He's just so relaxed and so excited to have a car that can win the race.”

That puts Johnson in a strange spot as he soaks in the race Sunday as a broadcaster all while his desire to be a participant in “The Greatest Spectacle in Racing” takes over. His wife and two daughters won't be at Indy this weekend — and it is Johnson's wife, Chani, who also needs to sign off on oval racing — but team owner Chip Ganassi understands a test is likely on an upcoming schedule.

“He's known where my head is on all this and the journey to run on an oval and if I was to pick just one oval of course it would be the 500,” Johnson said. “But there's a lot that has to happen on my side to be 100% for the 500 next year. And same thing for CGR, what does the team look like? We've had expansion. Do we expand more? So we'll see in in a couple of months where it all nets out.”