IndyCar's next wave proving kids are more than all right 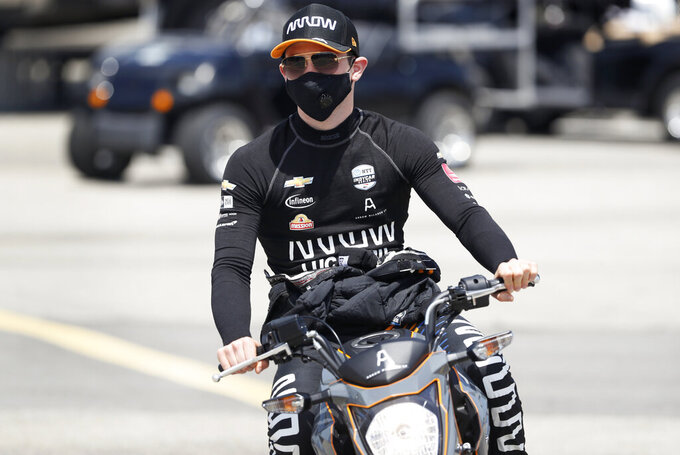 Pato O'Ward, of Mexico, makes his way to his car during practice for an IndyCar Series auto race Saturday, July 18, 2020, at Iowa Speedway in Newton, Iowa. (AP Photo/Charlie Neibergall)

NEWTON, Iowa (AP) — If only the English rock band The Who didn’t procure the name “The Kids Are Alright” for its 1979 documentary, it would have been the perfect title for this year’s wild and unpredictable IndyCar season.

Then again, the young guns have been better than just all right through the first six races.

There was 19-year-old Rinus VeeKay with a top-5 finish on the road course at Indianapolis Motor Speedway in his second career race. Twenty-year-old Colton Herta was the only driver with top-10 runs in each of the first four races. Brash 22-year-old Santino Ferrucci had two sixth-place finishes at Road America. Twenty-year-old Pato O'Ward and 23-year-old Alex Palou earned their first podiums the same weekend, while 23-year-old Oliver Askew did the same this weekend in Iowa.

“I think going into this weekend I had quite a bit of confidence,” said Askew, the reigning IndyLights champ, “and honestly, now that I've dusted up with these top guys in the IndyCar field — (Alexander) Rossi and (Scott) Dixon and guys I've looked up to for so long — to be racing them now is a great boost for me and the future.”

The future of IndyCar, too.

Not that Dixon, the series leader after another strong weekend in Iowa, is going anywhere. Two-time and defending champ Josef Newgarden, who won the second race of the Iowa doubleheader, has yet to turn 30. Indy 500 winners Rossi, Will Power, Simon Pagenaud and Ryan Hunter-Reay may fast become the elder statesmen of the series, but they are all still within their prime. Pagenaud, who like Newgarden drives for Team Penske, won the first Iowa race on Friday night.

But there has been some turnover within IndyCar over the last few years. Helio Castroneves stepped out of Team Penske's full-time ride after the 2017 to run sports cars. Sebastien Bourdais is driving a part-time IndyCar schedule. Fan favorite Tony Kanaan has called this his final season, picking a handful of races to run for A.J. Foyt Racing.

The natural ebb and flow of sports dictates there must be a wave of youngsters waiting to replace them.

Turns out there are six 20-somethings with an eye on becoming the face of the sport.

They come from all kinds of backgrounds and walks of life, too. O'Ward grew up in Monterrey and became the first Mexican driver since Mario Dominquez in 2006 to start on an IndyCar pole when he turned the trick at Road America. Palou is from Spain and VeeKay is Dutch, giving the youth movement some international appeal.

For the old-school open-wheel fans, Herta brings bloodlines to the track. He's the son of Bryan Herta, who drove during the chaotic days of the competing Indy Racing League and CART series and has owned IndyCar teams for several years.

They also bring a wide range of personalities. Herta brings a businesslike approach to the speedway, perhaps due to the fact that his team is owned in part by George Steinbrenner IV — the grandson of the late Yankees owner. O'Ward is mild-mannered and polite. Askew is the consummate pro, the winner of six Indy Lights races during his 2019 title season.

Then there's Ferrucci, who carries a certain bad-boy streak. That was evident a couple years ago, when he was racing Formula 2 in Europe. Incensed during a race at Silverstone, Ferrucci returned to the track and ran into the back of his own teammate after the checkered flag, then refused to appear before race stewards. And to cap it off, video showed Ferrucci driving his car with one hand on the wheel and the other holding his cellphone.

Not surprisingly, Ferrucci was fired by his Trident Racing team. He returned to the U.S. and had three top-five finishes in his first full IndyCar season for Dale Coyne Racing, and he has been running near the front this season as well — though perhaps not surprisingly, he was given a rare blocking penalty during the second race at Iowa.

This much is clear: The youngsters running in IndyCar these days are exciting to watch.

Take the doubleheader this weekend, where Herta and VeeKay were in contention Friday night before a caution flag waved. There was miscommunication on the restart and Herta missed that the green flag was waved off, and he hit VeeKay from behind at full speed and catapulted onto the front-stretch wall in a spectacular wreck.

There was Ferrucci, who cracked his front wing early in the first race but managed to wrestle his car the rest of the 250 laps. There was Askew, running side-by-side and rubbing tires with Rossi in Race 2, even though it was the first time he had been on a short track in an IndyCar.

Askew was third in the opener with O'Ward right behind. He was sixth in Race 2 with O'Ward just outside the top 10.

“It was a fantastic team result, but we are going to keep pushing,” O'Ward said. "We have the pace for both of us to be on the podium. So, I think we just have to execute, no mistakes, and I think we will be right there.”

With plenty of company from the other 20-somethings in IndyCar, too.