Hamlin thriving amid chaos as he chases first NASCAR title 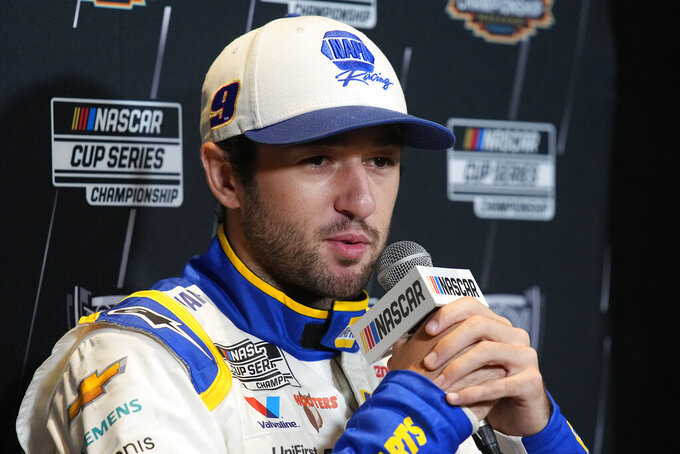 PHOENIX (AP) — What a difference a decade has made for Denny Hamlin, the undisputed winner on NASCAR's opening day of championship weekend.

Hamlin was a nervous wreck at the championship contenders news conference in 2010, his legs shaking as sat on stage alongside Jimmie Johnson and Kevin Harvick. The duo pounced on his vulnerability, which further rattled Hamlin and he ultimately unraveled and lost the championship to Johnson.

Back for a fifth attempt at his first Cup championship, Hamlin oozed confidence for an hour before a captive audience at the Phoenix Convention Center. No topic was off limits as Hamlin d iscussed last week's dustup with Alex Bowman, being booed at his home track, his potential legacy in NASCAR and “thriving under chaos.”

“I’m comfortable in who I am. Back in 2010 I didn’t have the big race wins that I have now,” Hamlin said. "I certainly know that I am a championship-caliber driver. There’s no question in my mind. Circumstances have not always worked out in my favor, performance hasn’t always been good enough.

“In 2010 I would have said, ‘Am I really good enough to do this?’ I mean, I had a ton of wins in 2010, I was battling Jimmie, and honestly things out of my control took us from locking it up to losing it. I got in my own head, then I messed up. I just wasn’t as comfortable then as what I am now.”

“I live in chaos. My life is chaos. I thrive under chaos. Honestly, you can ask Kyle. The more (crap) is stirred up around me, the more I come at it,” Hamlin said. “To me, it’s fuel. My tank is absolutely full with motivation.”

Hamlin is still mad about Bowman spinning him from the lead last week at Martinsville Raceway with six laps remaining, costing Hamlin his third win of the season. He called Bowman a “hack” on television — Bowman is now selling shirts promoting the dig — and on Thursday argued that the spin could have knocked him out of the playoffs.

“If I hit the wall hard enough, I don’t finish, I’m out. My whole season is done because of someone else’s choices or lack of respect for my position during that time,” Hamlin said. “That’s what drives me absolutely crazy, is that some people think that their win is more important than yours."

He said that he and Kevin Harvick are a “dying breed” among the drivers and said the two of them are similar versions of Hall of Famer Tony Stewart, who also performed at his best when in a firestorm.

Hamlin desperately wants to win a title — but said Thursday he would not wreck another challenger to clinch it — but is content with his career without a Cup in his collection. He said if he retired Monday as a driver, he'd be fine with his resume.

But he's certainly going to race hard Sunday to make his fifth try for a championship the charm and sounded convinced that he can win it.

Elliott can keep the good times rolling for Georgia sports fans should he win a second straight NASCAR championship. He was hoarse on Thursday as he talked about his chances at Phoenix, his voice strained by cheering on the Braves from his home Tuesday night when they beat the Houston Astros to win their first World Series since 1995, or, about one month before the Dawsonville, Georgia native Elliott was born.

NASCAR’s most popular driver was just another zealous sports fan in baseball’s postseason.

“I was talking to a buddy of mine, and it’s just crazy your emotions and how different it is when you can’t do anything about it. You’re just sitting there watching. You’re just trying to pull them through, but it was really cool,” he said. “The World Series, postseason baseball is one of my favorite things to watch, so when your team is in it, it’s super exciting.”

Much like a driver with a late lead trying to reach the finish line without a caution flag, Elliott was a bundle of nerves when the Braves took a 7-0 lead in the decisive Game 6.

“I don’t really feel any additional pressure, I’m just excited about it. It’s awesome,” he said. “The Dawgs and the Braves are kind of my two teams that I always pull for, and to see them having success is really cool. On our end, to have a great opportunity this weekend, that’s the most important thing to me.”