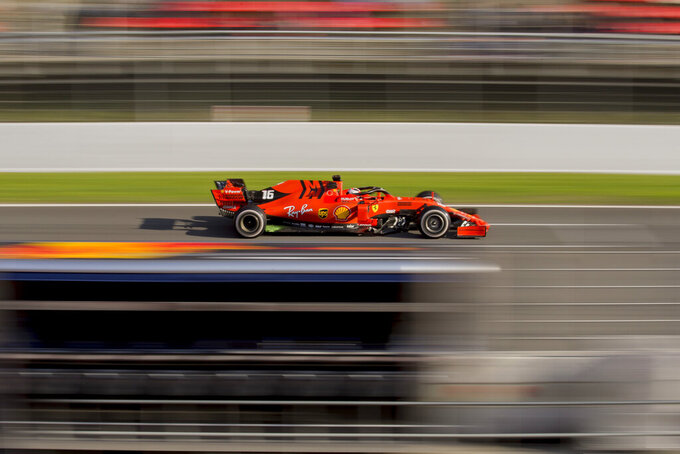 He came to beat him.

While that goal still looks lofty, the 21-year-old Leclerc impressed on Thursday when he set the fastest lap so far of this year's Formula One preseason testing in northeastern Spain. His effort of 1 minute, 16.231 seconds was only 0.05 seconds short of the record for the Barcelona-Catalunya Circuit set by Lewis Hamilton in qualifying for last season's Spanish Grand Prix.

According to Leclerc, both he and his new car have more potential.

"As every team we are not flat out," said Leclerc, who replaced Kimi Raikkonen at Ferrari. "The car is solid (and) I feel pretty comfortable in it. There's still a lot to learn, but it's a good start."

After showing his speed, Leclerc was 20 minutes away from completing a trouble-free session when his Ferrari came to a stop on a straightaway.

Leclerc took a seat atop of a concrete barrier while his fuming Ferrari was loaded by marshals onto a flatbed and hauled away.

His 138 laps were second to Williams rookie George Russell, who led the field with 140 laps on the day.

Leclerc's stoppage was nothing compared to the scare that Vettel had on Wednesday, when he crashed into a barrier and needed to be checked out by medical staff.

When asked if he had gotten any pointers from Vettel, Leclerc said that they their relation was far from student-teacher.

"At the end we need to work together to try and improve the car, but he also wants to beat me on the track as much as I want to beat him," Leclerc said. "So it's not like I'm going to him to try and have some tips, but I can definitely learn from him (by) looking at his data, looking at the way he works with the team. So yeah that has been very, very helpful."

Vettel will be back behind the wheel on Friday, the last chance for teams to test their cars before the season-opening Australian Grand Prix on March 17.

Defending champion Hamilton had another mundane session, clocking the 10th-fastest time while sharing the wheel with Mercedes teammate Valtteri Bottas.

Bottas said that Ferrari seemed to be a step ahead of Mercedes, which has won the title for five years in a row.

"They still seem strong, (but) as always from testing to Melbourne a lot can change," said Bottas, who had the slowest time of the 13 drivers. "We need to unlock more from the new package to be able to compete with them properly."

Pierre Gasly ran his Red Bull off the track for a second time this preseason. The Frenchman, who was promoted from feeder team Toro Rosso, lost control on curve Nine and hit the protective barrier.

Another red flag came out when Lance Stroll's Racing Point car stopped in a straight.

Along with Russell's long run, there were also promising performances from two more F1 newcomers.

Toro Rosso's Alexander Albon clocked the second fastest time of the session, followed by Lando Norris in his McLaren.