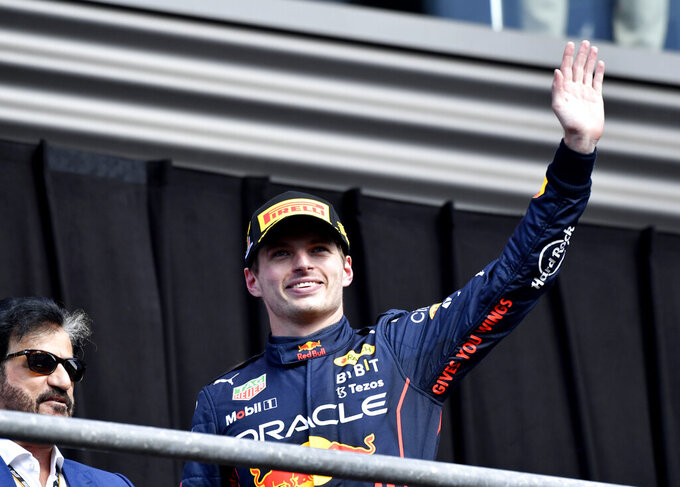 First place Red Bull driver Max Verstappen of the Netherlands waves to the crowd as he steps on to the podium during the Formula One Grand Prix at the Spa-Francorchamps racetrack in Spa, Belgium, Sunday, Aug. 28, 2022. (AP Photo/Geert Vanden Wijngaert)

SPA-FRANCORCHAMPS, Belgium (AP) — Formula One championship leader Max Verstappen quickly carved his way through the field from 14th to win the Belgian Grand Prix on Sunday and widen his lead in the title race.

Verstappen, who in the final race before F1's summer break drove from 10th to win the Hungarian Grand Prix, produced another imperious drive and moved closer to a second straight world title.

“It’s been a weekend I couldn’t have imagined before," Verstappen said. "But I think we want more of them and we’ll keep working hard.”

His lead in the standings is now 93 points — but it is over Red Bull teammate Sergio Perez because Charles Leclerc dropped to third in another poor Ferrari showing.

“It was quite a hectic first lap to try and stay out of trouble. So many things were happening in front of me, picked the right places to pass people, looked after our tires," Verstappen said. "Once we were in the lead, it was all about managing everything but this whole weekend has been incredible.”

Verstappen was leading the race by Lap 12, and he earned a bonus point for fastest lap. His third straight win was his ninth this season and 29th overall.

“Amazing Sunday guys, haha!” Verstappen said on his radio after crossing the line.

“Max you have been brilliant, class of your own all weekend,” team principal Christian Horner replied.

The 24-year-old Verstappen — the youngest driver to win a race when he was 18 — said it was probably the most complete drive of his career.

“If you look at the whole weekend, yes,” he said. “This track just seemed to be perfect for the car.”

Perez finished second to jump ahead of Leclerc in the season standings.

Carlos Sainz Jr. started from pole for Ferrari and finished a disappointing third. Leclerc started 15th and finished fifth behind the Mercedes of George Russell, but Leclerc dropped to sixth after he was handed a five-second penalty for speeding in the pit lane.

That pushed Alpine driver Fernando Alonso into fifth, and Leclerc, who is now 98 points behind Verstappen in the standings, was shocked by the penalty and appeared defeated in the championship race.

“I didn’t even know, no one told me,” a surprised Leclerc said of the penalty. “Why did I get the penalty?"

As for his title race with Verstappen?

“I’m not focusing so much on the championship now. Red Bull were on another planet today,” Leclerc added. “We need to know why we’re so far away."

Lewis Hamilton's bid for a sixth straight podium ended on the first lap when he clipped Alonso and briefly went airborne.

Sainz started from pole because Verstappen and Leclerc were among several drivers to be hit with grid penalties. Sainz got away at the start and Russell and Hamilton zoomed past Perez and behind Alonso.

Hamilton then overtook Alonso on the outside but clipped the side of his Alpine, sending Hamilton's Mercedes up in the air. Race stewards reviewed and took no action, though Alonso clearly felt Hamilton had not left him enough room as he tried to regain the position.

“What an idiot closing the door from the outside,” Alonso ranted. “We had a mega start but this guy only knows how to drive and start in first.”

Hamilton later cut off an interviewer who attempted to relay Alonso's comments to him.

“It doesn't matter what he said," said Hamilton, who added he didn't see Alonso “in my blind spot.”

But in a separate interview, Hamilton accepted he hadn't left enough room for Alonso.

“It was my fault,” Hamilton said. “I paid the price. I was ahead though.”

For Hamilton it was the fifth time he’s retired on Lap 1, with three retirements coming at the 7-kilometer (4.3-mile) Spa-Francorchamps circuit — the longest in F1 and one of the best for overtaking, as Verstappen showed.

Seconds after Hamilton pulled over, Nicholas Latifi slid across the track and nudged the Alfa Romeo of Valtteri Bottas into the gravel, bringing out the safety car.

Hamilton stood next to his car as smoke billowed out, then walked slowly back to the team garage. He was later issued a warning for refusing to visit the medical centre.

Bottas, his former Mercedes teammate, was also out while Leclerc came in early as his team changed his tires and removed some debris from another car stuck inside Leclerc’s front right wing.

Later, Ferrari made yet another bizarre call in this strange season of botched strategy decisions when the team called in Leclerc for new tires with one lap remaining in a futile bid to score the fastest lap. Leclerc was overtaken by Alonso as he came out of the pits, and then had to overtake the Spaniard back, consequently failing to register the fastest lap.

Esteban Ocon of Alpine was seventh and followed by Sebastian Vettel of Aston Martin, Pierre Gasly of AlphaTauri and Alex Albon of Williams.

Next up for Verstappen? His home race in the Netherlands, where he won in style in Zandvoort last year.

“I am going to enjoy today and then next week we'll see what we can do," said Verstappen, who is on pace to beat Vettel's season record of 13 victories set in 2013.