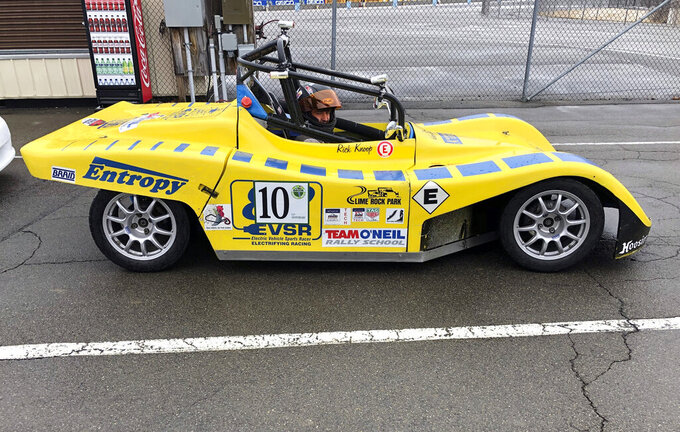 Bob Gillespie is a bit on edge as he gets set for another Green Grand Prix.

The 18th edition of the unique road rally at Watkins Glen International is Friday, and for the first time drivers will be running the famed Boot section, making one lap a mile and four tricky turns longer than the 2.45-mile layout used by NASCAR each August.

“I think it would be crazy to send people into the Boot that have never even driven the track. That would be nuts,” said the 72-year-old Gillespie, who's in charge and is giving drivers a pace lap for safety's sake. "There's a temptation to build up some speed in certain places. It makes me nervous.

"At least we have insurance," he added with a chuckle.

The Green Grand Prix is a celebration of sustainable transportation that promotes awareness of environmentally friendly vehicles. Billed as the only road rally for alternate-fuel vehicles and hybrids in the United States sponsored and insured by the Sports Car Club of America, today it's essentially a fuel mileage competition at the storied track in the Finger Lakes region of upstate New York. An autocross also is scheduled in the afternoon and a panel of five training specialists will discuss the technical aspects of the new Toyota bZ4X, an all-electric SUV, and EV infrastructure issues. The focus is to provide close to 200 auto-tech students with information on the latest in vehicle technology.

In a year in which gas prices have soared — one gas station in northern California upped its price for a gallon of regular unleaded to over $8 in early March — the rally serves as a reminder of what lies ahead, and even IMSA is now on board. Its WeatherTech Championship will use a hybrid system in every LMDh prototype competing for the Grand Touring Prototype crown starting next January with the Rolex 24 at Daytona.

“I feel events like these are important because what they do is they show the general public that electric vehicles are capable," said Sergio Rodriguez, a consultant at Kingsbay Naval Submarine Base in Georgia who was driving north in his Ford Mustang Mach-E to participate for the first time. "So many people believe that you can barely go from (point) A to (point) B with anything green. I’ve driven cross country from California to Georgia with three different electric vehicles. People are still shocked and amazed that you can do that.”

Toyota, whose Upstate Toyota Dealers Association is a primary sponsor of the Green Grand Prix, also will showcase bZ4X EV. It will be among seven fully electric vehicles — the most ever — competing for fewest kilowatt hours used. Among them are two Mach-Es, a KIA EV, a 2018 Chevrolet Volt, and a 2021 Toyota RAV4 Prime with Tom Pollak behind the wheel. It’s the third time Pollak will participate in the Plug-in Hybrid-Electric Vehicle (PHEV) class. About 25% of the entries will use regular petroleum, including one diesel, Gillespie said.

“People, I think, are becoming aware of the fact that there are options out there,” said Pollak, a real estate broker from Binghamton, New York. "I've got a lot of friends that are just motorheads that won't go for electric anything. But other people are starting to listen and to notice because when it really comes right down to it, people do care. They really don't want to mess up the environment.”

Still, making the switch can be a big hurdle, even for those who embrace the idea.

“It took me several years," Rodriguez said. "It’s all about experiencing it, trying it out and getting to know that vehicle will take you from point A to point B, and that there is enough of an infrastructure for you to be able to drive cross country. I’ve done it a few times, but it does take a little bit more planning.

“You can’t just jump in and go like a gas car and expect to find a gas station at any corner, but there are so many free electric chargers throughout the country. When have you ever stopped and been able to fill up with gas for free?”

The Green Grand Prix, which also is sponsored by the Doris Bovee Memorial Foundation and the International Motor Racing Research Center in Watkins Glen, has been hosted by WGI for more than a decade. Michael Printup hoped when he took over as track president in 2009 that it would become a fixture, and he likes what he sees.

“It's pretty much a trend-setter," Printup said. "I think it's amazing that this growth is still happening. I'm a firm believer in alternative energy vehicles and this is a great way to showcase a product. Some day I'm hoping that we can put 20,000 fans up there (in the stands) watching these guys and girls go to work.”