Denny Hamlin wins on a long day at Homestead 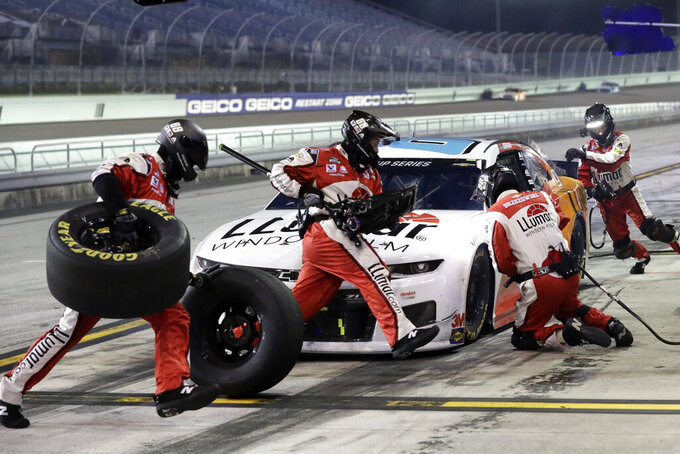 Hamlin went to the lead for the final time with 30 laps left and held off Chase Elliott for his record-tying third NASCAR Cup Series victory at Homestead.

Former drivers Tony Stewart and Greg Biffle are the other three-time winners. Hamlin is in the club now, after battling Elliott most of the night.

“This one was real special,” Hamlin said.

Hamlin raced to his third victory of the season and 40th overall. He opened the season with a victory in the Daytona 500 and won at Darlington last month. And when the night was over, Hamlin — who wears the Michael Jordan “Jumpman" logo on his race suit — made no secret that he's racing with some extra energy these days.

“I just need to get through lap traffic better," Elliott said.

Ryan Blaney was third in a race oft-delayed by rain and lightning. Tyler Reddick finished fourth.

“I just needed to execute a little bit better," Reddick said. “It was tough. We were just a little bit off there in the last two runs."

Fittingly, a very long day was the capper to a very long week for NASCAR — three Cup Series races in eight days, all of them bringing drivers into hot and steamy weather conditions that left many of them exhausted, all wrapped around the ongoing national outcry surrounding the battle for racial equality.

Bubba Wallace, the only black driver in the Cup Series, has become the sport’s most prominent activist after he successfully called last week on NASCAR to ban Confederate flags at its events; the series quickly did just that to mostly rave reviews. So, while fans —1,000 of them, mostly invited military members who could each bring a guest — were back at a NASCAR race for the first time since the coronavirus pandemic started, there were none of the banned flags in sight.

Most of those fans were gone when Hamlin drove under the checkered flag at 10:46 p.m., ending the marathon day.

The race was over. So was the day. Finally.

“I knew if I was just patient, ran the pace I wanted and the pace I was comfortable with, we were going to be hard to beat in the long run," Hamlin said.

Wallace finished 13th. Jimmie Johnson, the seven-time champion who had the tunnel that leads to the track named in his honor earlier in the weekend and is retiring as a full-time driver after this season, was 16th.

Hamlin won the first two stages and bucked a trend this season, where drivers who do that don't wind up with the win.

The last driver to win the first two stages and ultimately win the race was Martin Truex Jr. at Martinsville last Oct. 27. That is, until now.

“I'll take every win I can," Hamlin said. “Let's just keep piling them up."

The weather toyed with the race all day.

A slight shower, one where it only rained over Turns 3 and 4, popped up around the very instant that drivers fired up the engines to get things going. That was followed by the day’s first batch of lightning and the delay caused the race to start 55 minutes later than planned.

Drivers got through three laps — not even five miles — when lightning was spotted near the track and a caution came out that turned into a red-flag stoppage and would last for 2 hours, 8 minutes. And after about 25 more laps once things finally resumed, lightning struck again to prompt another interruption of nearly 39 minutes.

“It was a little bit different,” Blaney said. “Obviously, we raced later than we thought, but on the other side of that, the race that we’re used to down here usually ends a little bit later too. ... It was difficult getting in and out of the car, that part stinks, but safety is important.”

Counting the pre-race delay, that was 3 hours, 42 minutes of sitting around in weather-related stoppages on a day where most of the track was completely dry throughout. It was 8:15 p.m. when the green flag dropped again and drivers — who had been through only 33 laps to that point — started the final 234 times around the Homestead surface.

Austin Dillon had a day he’ll never forget, though his seventh-place finish wasn’t even close to the most significant development. Dillon and wife Whitney became parents early Sunday, announcing the birth of a boy named Ace.

“Hardest thing I’ve ever had to do was say goodbye to go race today,” Dillon wrote in the Instagram post in which he announced the birth. “Hopefully we bring back a trophy for Ace on the first day we welcomed him into this world!”

Instead, the trophy went to Hamlin, who has now won this season with stands full of fans (Daytona), no fans (the second race at Darlington) and some fans (Homestead).

“It’s a number that I’ve been looking at for quite a few years and at one point I didn’t know if I’d get there,” Hamlin said of hitting the 40-win milestone. “I’ve adjusted my goals since then. ... I don’t think we’re at the top of our game with our team yet.”