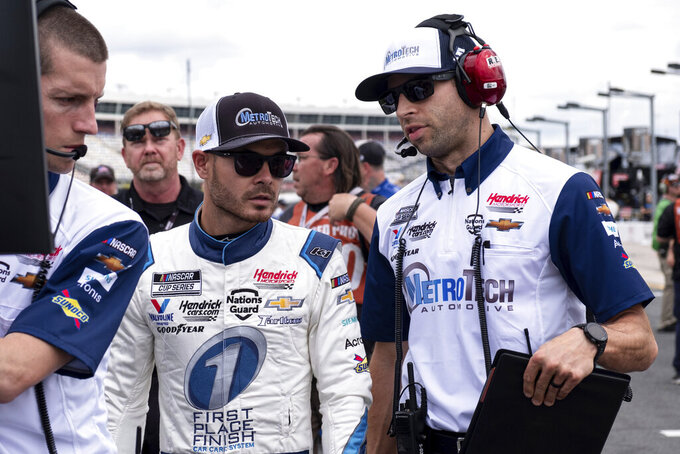 FILE - Kyle Larson, center, talks with his crew chief Cliff Daniels, right, before qualifying for the NASCAR Cup Series auto race at Charlotte Motor Speedway on Saturday, May 29, 2021 in Charlotte, N.C. Daniels, fresh off his first NASCAR championship as a crew chief, still isn’t getting much sleep. He’s in Nashville to celebrate the Cup title won with Kyle Larson and the No. 5 team while his wife is back in North Carolina expecting the birth of their second child at any moment. (AP Photo/Ben Gray, File)

Daniels is notoriously intense, as close as a clone as one can be to seven-time championship-winning crew chief Chad Knaus. But after clinching his first Cup Series title as crew chief with Larson's win last month at Phoenix Raceway, Daniels revealed he struggled to sleep before every race this season.

“My resting heart rate is too high. I have not slept before any Cup race all season long,” Daniels said. “Pick a random race in the middle of the year, I did not sleep. You can ask my wife,and, I promise you, all the time she lectures me, ‘You have to get sleep, you have to get sleep.’ But I cannot sleep because I hold myself to a really high standard, and I think the folks around me know that.”

Now in Nashville for NASCAR's season-ending awards celebration, Daniels still isn't getting much rest. Although he thoroughly enjoyed the championship party in Arizona — Daniels wasn't feeling well enough to fly home to North Carolina for almost two days — he had to immediately prep the No. 5 team for a critical test of the Next Gen car that NASCAR is unveiling next season.

He had a brief break for Thanksgiving and then traveled with Hendrick Motorsports to Nashville, where the 33-year-old's anxiety level is on overload: wife Shannon is back in Charlotte expecting the birth of their second child any day.

The baby is currently in breech and Daniels told The Associated Press his concern for his family weighs heavily on him.

“I still am not sleeping,” Daniels said as he sat alone at a downtown hotel bar grabbing a quick appetizer before a formal dinner with the team.

He doesn't really expect that to change, either. He's soon going to have two toddlers at home and at work he'll be tasked with duplicating one of the greatest seasons in NASCAR history. Daniels led Larson to 10 Cup wins, the most laps led in a season, a victory in the $1 million All-Star race and a Cup title in their first season together.

“With Kyle Larson as your driver, you’re the weak link, not him. That’s the way I see it and that's why I will probably never sleep,” Daniels said.

Daniels was a crew chief in need of validation, wondering if he could lead a team at NASCAR's top level following 50 winless races with seven-time champion Jimmie Johnson.

Daniels had been an engineer under Knaus for Johnson on the No. 48 team, but when team owner Rick Hendrick split Johnson and Knaus after the 2018 season, Daniels didn't get a crew chief job. It took 21 frustrating races in 2018 before Hendrick ordered another reorganization that put Daniels atop Johnson's pit stand.

But when he failed to get one of the greatest drivers in NASCAR history to victory lane, Daniels feared he didn't have what it takes. He knew Johnson was retiring at the end of the 2020 season and wasn't sure he'd keep the job.

Hendrick never doubted Daniels — “Chad raised him,” the owner said of Knaus — and he had faith in the pairing he planned for 2021.

“I remember when Cliff didn’t know who the driver was going to be this year. I said, ‘I think you’ll be happy,'" Hendrick recalled.

Knaus, now Hendrick's vice president of competition, reluctantly chose Daniels when asked which of the four current HMS crew chiefs are most like him in leadership. Although the two are similar in intensity and drive, Knaus' hesitancy was based on Daniels' life balance.

“He is what I wish I had been,” Knaus told AP. “He is so smart, like he's really intelligent and he gets it. He also has that racer instinct and that's a tough thing to put together. To be as racer-savvy as he is and also be an engineer, it's a weird combination that he's able to pull off.”

Daniels got his start, after all, as a racer. It was a family activity centered in the garage of their Smithfield, Virginia, home. Both Daniels and his sister worked on cars their father raced at Langley Speedway, and the siblings progressed into drivers in their own right.

But Daniels detoured on an educational track and earned an engineering degree at UNC Charlotte, a strong starting point for those hoping to break into NASCAR. Daniels worked on Hall of Famer Tony Stewart's team before Knaus brought him to Hendrick, and his chance to lead a team came with Johnson.

When he learned he'd be paired with Larson, who was suspended all but four NASCAR races in 2020 for using a racial slur, Daniels wasted no time learning as much as he could about his new driver before the season. Daniels began to attend dirt races when Larson competed so he could listen to the driver communicate, learn his vernacular and understand how much Larson knew about cars.

“I needed to learn the discipline of dirt racing. I went to late model races, I went to midget races, I went to sprint car races,” Daniels said. "I was getting so much information from him about himself, like he was up front every night, and if he got beat by somebody on a restart, he would tell me what he did wrong.

“And it would help me learn what he needed to look for out of himself and out of the car, whether dirt or pavement or any series moving forward. So that information to me was really invaluable because I don’t know how else I would have gotten it.”

Larson admittedly knows very little about race cars, and before joining Hendrick this year he'd never been part of pre-race strategy sessions. He lauded the effort Daniels put in and the close-knit team he has built.

“He came on his own behalf and it was just nice for me to see that he cared about all the racing that I do and wanted to learn about it, wanted to talk to the crew chiefs, pick their brain about how I communicate and stuff,” Larson said. “I think that really kind of kick-started the relationship. I’m really easy to work with, I feel like he’s really easy to work. He is so good at communicating and so good at painting a picture and together we have great chemistry.”