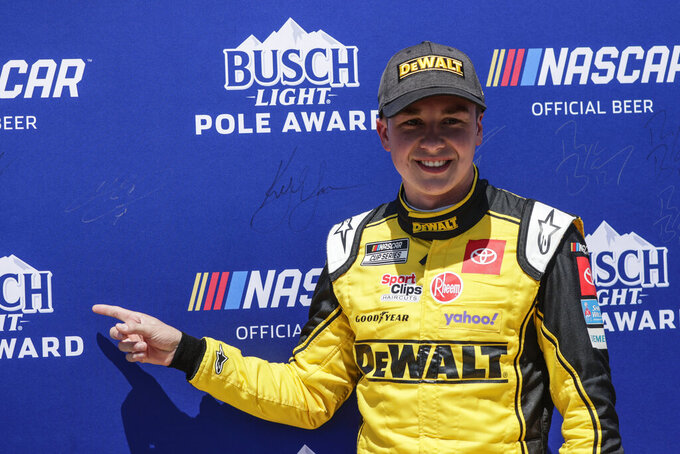 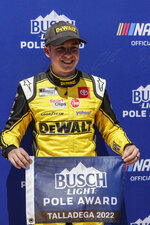 TALLADEGA, Ala. (AP) — Christopher Bell won the pole at Talladega Superspeedway by turning the fastest lap as the final driver to qualify on Saturday.

Bell bumped his Joe Gibbs Racing teammate Martin Truex Jr. from the top spot with a lap at 180.928 mph in his Toyota. Truex qualified second at 180.652 mph to give JGR the front row for Sunday's race.

JGR is coming off a win last Sunday with Kyle Busch at Bristol.

Daniel Hemric qualified third for Kaulig Racing in a Chevrolet and was followed by Daniel Suárez of Trackhouse Racing, also in a Chevrolet.

Reigning Cup champion Kyle Larson qualified fifth in a Chevrolet from Hendrick Motorsports and was followed by Kurt Busch of 23XI Racing in a Toyota. Denny Hamlin, co-owner of 23XI but driver for JGR, qualified seventh as Toyota grabbed four of the top seven starting spots.

William Byron qualified eighth for Hendrick and was followed by Bubba Wallace in a Toyota and Tyler Reddick in a Chevrolet from Richard Childress Racing.

Joey Logano was the top qualifying Ford driver at 13th for Team Penske and defending race winner Brad Keselowski qualified 15th in a Ford for RFK Racing. Keselowski is the winningest driver in the field with six victories at the track and Ford was the most organized manufacturer in the Daytona 500, where Ford rookie driver Austin Cindric won in February.

For Bell, it was the second pole of his Cup career and gave JGR its first lockout of the front row at Talladega. Bell's best finish at Talladega was fifth last fall.

“I’m just very thankful to be in the position I am driving for Joe Gibbs Racing,’’ said Bell, who admitted that gusts of winds Saturday at Talladega ”didn’t hurt" his qualifying attempt.

“Even from the first round to the second round I could tell my RPMs picked up really big going down the back straightaway, then they were pretty flat going down the front straightaway, so I don’t know if it was an advantage to me but definitely didn’t hurt,’’ added Bell.