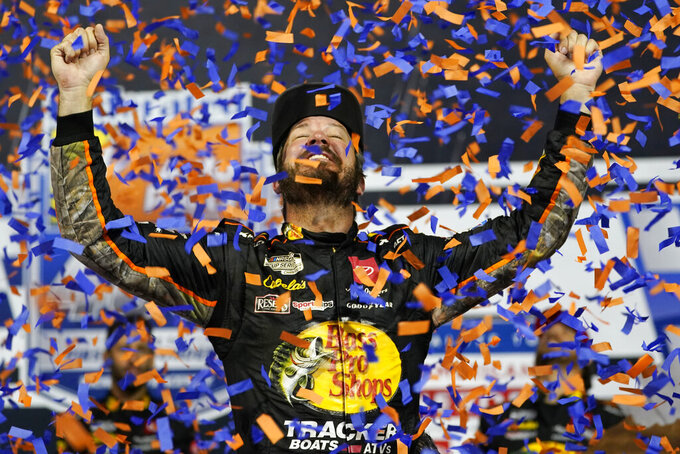 Fast facts: Regular season champion Kyle Larson was sixth at Richmond and his points lead was cut to 34 over Hamlin and 38 over Truex. All three have qualified for the next round of the playoffs. ... Three Team Penske drivers — Joey Logano, finished fifth; Ryan Blaney, sixth; and Brad Keselowski, ninth — were all running in the top five together at one point at Richmond. ... Defending series champion Chase Elliott is seventh in points, 79 behind. ... Kevin Harvick is sixth, 73 back.

Fast facts: Only one race remains before the 12-driver field is set for the playoffs. ... Gragson's consecutive victories are his first two of the season. ... A.J. Allmendinger's points lead over defending series champion Austin Cindric went from one point to five. Justin Allgaier is third, 121 behind. ... Nine drivers racing primarily in the series have victories this season. Allmendinger's three wins tie him with Ty Gibbs for second-most, trailing only Cindric with five. Gibbs is not eligible for the playoffs, having made just 13 starts this season.

Fast facts: Creed, the defending series champion, led 104 of the 147 laps and has won three consecutive playoff races dating to last season. He leads John Hunter Nemechek by two points in the standings through one race in the postseason. Three-time champion Matt Crafton is third, 34 points behind. Canadian racer Stewart Friesen is 36 back and Ben Rhodes is 54 behind.

Last race: Alex Palou recovered from a first-lap mistake on the road course in Portland and rallied for his third victory of the season to regain the series points lead.