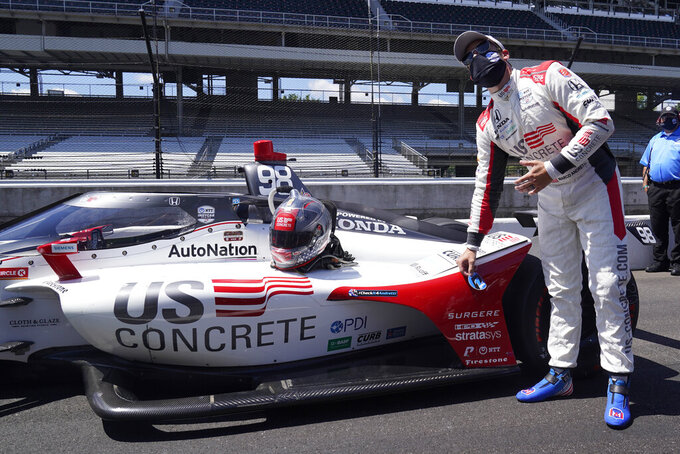 INDIANAPOLIS (AP) — Marco Andretti was 2 months old the last time his venerable racing family led the field to green at the Indianapolis 500. In this strange pandemic-plagued season, he ended a 33-year Andretti drought by winning the pole.

That darned “Andretti Curse” has haunted three generations of racers at Indianapolis Motor Speedway since 1969, when Mario Andretti won his only Indy 500. Now his grandson, with a lightning-fast and fearful four laps around the speedway, has cleared the first hurdle toward an elusive victory.

In his 15th attempt, he will attempt to end that stupid family curse once and for all.

The last of nine drivers Sunday to make a qualifying run, Marco Andretti logged a four-lap average of 231.068 mph to bump five-time IndyCar champion Scott Dixon from the pole. Andretti worried about the wind all morning and relied on advice his grandfather has long given the racers of the family to find the courage to hold it wide open for four laps around one of the most famous tracks in motorsports.

“The wind will scare you, but it will never crash you," Marco Andretti said, quoting his grandfather after his run.

He seemed to have tears in his eyes and his hands appeared to briefly shake as driver after driver congratulated him on pit lane. Then came a strong embrace with his father, owner of the six Andretti entries in the rescheduled Aug. 23 race.

“Obviously I was emotional. We put so much into it. This place means so much to us as a family,” Marco Andretti said. "We’ve just been through so many ups and downs at this place. Obviously my (late) cousin John is riding with me, my grandfather from home.

“We know family is pulling for us. We live and breathe this sport, this race in particular.”

At his home in Pennsylvania, 80-year-old Mario Andretti said he was "never so nervous in my life” as he watched his grandson's run on television.

“I'm happier now than I've ever been," Andretti said on NBC Sports. “I jumped so high I hit my head on the ceiling and it's a 9-foot ceiling. He knows what he needs to do to get the best out of the car and minimize mistakes. He's seriously focused on winning the 500.”

In a normal year, Marco Andretti would have received a thunderous ovation after his run. But the coronavirus pandemic forced new track owner Roger Penske to keep the gates closed for the first time in the 104-year history of the race. Spectators showed even during the Great Depression, but this year, only a small gathering in a gravel parking lot across the street from the speedway peeked through a fence opening between the grandstands as Andretti set a blistering pace.

“An Andretti on the pole at Indianapolis — too bad we couldn’t hear the crowd explode,” teammate Ryan Hunter-Reay said. Team Penske's drivers, watching from inside the garage, were among the rivals who celebrated Andretti's moment.

The Andretti organization had four of the nine spots in Sunday's shootout for the pole and a shot at sweeping the front row. But the speed the team showed Saturday dropped off for Hunter-Reay, James Hinchcliffe and Alexander Rossi, and it was Dixon at 231.051 mph who jumped to the top of the board.

“Man, I didn't think we had a chance,” Michael Andretti said.

But his son kept it wide open in an effort of bravery in windy conditions on a warm racetrack. Marco Andretti was ninth in order, aware of the number Dixon had posted, and refused to flinch.

“Honestly Marco was the guy I was hoping for because I think he deserved it,” said Dixon, who was beat for the pole and later spun during the Sunday afternoon practice.

“That’s a hard situation to go into, especially being last up and everything is on the line. We threw up a decent number. It wasn’t going to be easy to beat.”

Rinus VeeKay, a 19-year-old rookie for Ed Carpenter Racing, was fourth and the only Chevrolet driver in the fast nine. Hunter-Reay and Hinchcliffe filled out the second row. Alex Palou, a rookie for Dale Coyne Racing, was seventh and will start alongside Graham Rahal and Rossi.

Positions 10 through 33 were set in Saturday qualifying, when Honda dominated and Chevrolet struggled to match the same speed. It meant none of the four Team Penske entries had a chance at the pole Sunday and reigning series champion Josef Newgarden in 13th is the highest-starting Penske driver. Defending race winner Simon Pagenaud starts 25th.

Marco Andretti, meanwhile, has a full week to absorb his pole-winning run; the pressure will undoubtedly mount as he's now the favorite to win the Indy 500. His family had suffered tremendous heartbreak at this track, the curse unable to be broken in 51 years.