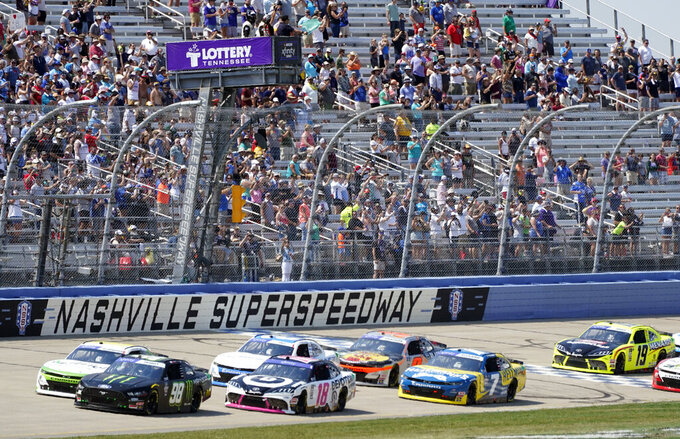 LEBANON, Tenn. (AP) — Justin Allgaier routed the field at Nashville Superspeedway on Saturday for his second Xfinity Series victory of the season.

The JR Motorsports driver led 134 of the 188 laps in his Chevrolet and beat Trevor Bayne by 4.513-seconds on a hot, steamy afternoon in which in-car temperatures inched toward 130 degrees.

“That was a butt-kicking,” Allgaier radioed his team. “Thank you guys so much, it never gets old.”

He said he can't recall a time he's had such a dominant race car, and was glad to have it at Nashville. It was his eighth career Xfinity Series start at Nashville and first time Allgaier collected the winner's celebratory custom guitar.

“I've been coming here a long time and I love this racetrack, and I've been trying to get to victory lane so bad and haven't been able to do it,” said Allgaier, who dedicated the performance to “the dirt racers because it was slick. It was hot, we were sliding around.”

Allgaier dedicated the win to his father, who he said has been suffering from health complications.

Nashville marks the hottest race weekend so far of this season with temperatures in the mid-90s and 30 degrees hotter inside the car. Series points leader AJ Allmendinger dropped to the ground when he climbed from his car and immediately began icing his heels from where the exhaust pipe sits under him during the race. He's scheduled to race Sunday in the Cup Series.

Ryan Vargas was taken by golf cart to the care center and other drivers were seen receiving ice bags and water on pit road.