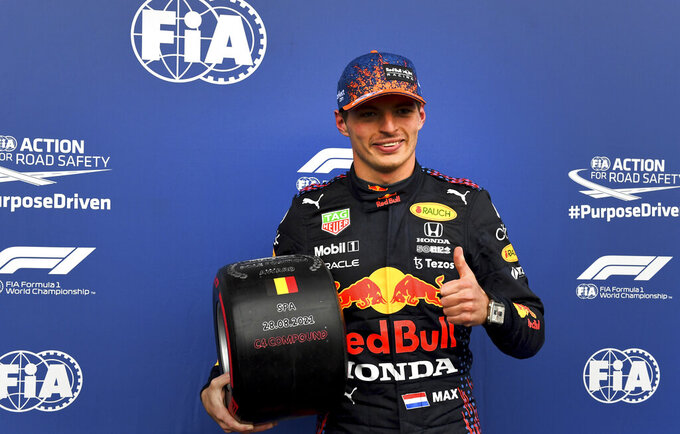 First place for pole position Red Bull driver Max Verstappen of the Netherlands holds the prize after qualification ahead of the Formula One Grand Prix at the Spa-Francorchamps racetrack in Spa, Belgium, Saturday, Aug. 28, 2021. The Belgian Formula One Grand Prix will take place on Sunday. (John Thys, Pool Photo via AP)

AMSTERDAM (AP) — Formula One fans will hope Sunday’s Netherlands Grand Prix is a spectacular race to remember rather than a dismal one to forget.

Last weekend’s rain-drenched Belgian Grand Prix was called off shortly after it restarted under a safety car for a few slow laps, and more than three hours later than its scheduled time.

Hopeful fans, many stuck in traffic for hours getting in and out of Spa-Francorchamps, had waited soaked to the bone.

All they eventually saw was a measly 10 minutes of drivers crawling behind a safety car and then stopping on Lap 4 as track water sprayed over their helmets. F1 rules still gave Red Bull's Max Verstappen the win because he'd completed two laps, while seven-time F1 champion Lewis Hamilton finished third. The Mercedes driver branded the situation “a farce.”

There was widespread criticism of F1 and governing body FIA, who have pledged to review what happened and also look at options for fans who bought tickets.

“The FIA, together with Formula 1 and the teams, will carefully review the regulations to see what can be learned and improved for the future,” FIA president Jean Todt said this week.

The botched race saw only half points awarded to the winner, giving Max Verstappen 12.5 points for his sixth win of the season and least memorable of his 16 career victories.

“It’s not how you expect to win a race, but the points are still important and we have to maximize every opportunity,” Verstappen said. “I hope we can put on a good show for everyone in the grandstands this weekend.”

Victory in Spa trimmed Hamilton’s overall lead from eight to three points heading into the Dutch GP, where Hamilton seeks a record-extending 100th win, and at Verstappen’s home track.

The undulating 4.3-kilometer (2.7-mile) circuit is located at the seaside resort town of Zandvoort just outside of Amsterdam. Rising and falling through dunes, it is fast flowing with banked turns of up to 18 degrees offering plenty of chances for overtaking.

Zandvoort first hosted a race in 1952 and last did so in 1985. It was set to return last year only to be one of several canceled due to the coronavirus pandemic.

In 1952, Alberto Ascari led a 1-2-3 finish for Ferrari, which has not won an F1 race since Sebastian Vettel's victory at the Singapore GP two years ago.

The ’85 edition was an intense duel in the dunes between world champions.

There will be four world champions on the grid on Sunday.

Hamilton is joined by Vettel, Fernando Alonso and Kimi Raikkonen.

They have a combined seven titles but none of them are remotely close to challenging Hamilton.

Verstappen certainly is and a seventh victory of the season would move him back in the lead in a thrilling title race.

Doing so in front of his legion of devoted fans, who Verstappen calls his “Orange Army” and who follow him in huge numbers, would be especially poignant.

“It will be special to have a race in the Netherlands in front of my home crowd,” said Verstappen, who raced here seven years ago in F3. “But also, as a driver it’s a good challenge to go to a new circuit and find the limit. The qualifying laps will be very quick so any mistakes will be really costly.”

Saturday’s qualifying, with tens of thousands of spectators shouting for Verstappen, may feel intense even for some as experienced as Hamilton. The 36-year-old Brit is F1’s record holder with 101 pole positions but he trails Verstappen 6-3 this season and 6-4 for wins.

Hamilton has been pushed harder than at any time since he lost to then-Mercedes teammate Nico Rosberg in 2016.