Shank trying to use IndyCar break to finalize future plans 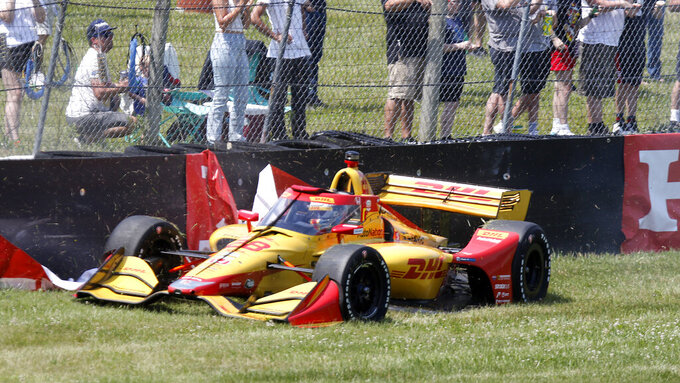 Ryan Hunter-Reay hits the tire barrier after going off the track on the first lap during an IndyCar race at Mid-Ohio Sports Car Course in Lexington, Ohio, Sunday, July 4, 2021. (AP Photo/Tom E. Puskar)

LEXINGTON, Ohio (AP) — A bright pink sheet hung near the entrance to the infield at Mid-Ohio Sports Car Course congratulating local team owner Michael Shank on his Indianapolis 500 victory — another sign that Meyer Shank Racing is currently having a moment.

Shank is an Ohio native who romped around the fabled road course as a kid and now bases his race teams 50 miles from the track in Pataskala. But the support at Mid-Ohio was more than just a nod to the local guy — interest in Shank's team has exploded since Helio Castroneves drove the pink Shank car to victory a little over five weeks ago.

“That big win changed a lot for us,” Shank told The Associated Press. “The enthusiasm for the program, we have to get ahold of it now.”

IndyCar is in the first week of a month-long break, and although Shank enjoyed a day of fun Monday on his boat at Buckeye Lake, he's got little free time to bask in the new attention.

Castroneves will return to the car when IndyCar resumes Aug. 8 in Nashville, Tennessee, and Shank wants bring the four-time Indy 500 winner back to the series full-time in a second car. Castroneves begged for more races after winning the 500, but MSR, which is run on a strict budget controlled by Shank's wife, Mary Beth, stuck with its original five-race plan.

Shank is also working on a contract extension with current driver Jack Harvey, who doesn't have the results to show for how far the team has come since the program launched with the 2017 Indianapolis 500. Shank went from one race that first year to six the next and then 10 in 2019.

This year is the second consecutive season Shank has committed to a full schedule and he's working on adding a second car. He also wants to continue his technical alliance with Andretti Autosport, a contract that is still being negotiated.

With only 52 employees covering both his IndyCar and IMSA sports car teams, Shank is navigating the logistics of owning an organization with sudden strong fan interest.

“Now, they're buying our merchandise and so now we have a merchandise problem,” Shank said. "We're literally not set up for it. I'm yelling at our merchandise people ‘Why do people keep telling me we are out of stock?’ We're producing as fast as we can. But we weren't set up to win the Indy 500 from a lot of different angles.

“I think we were ready operationally, but then it actually happens and it's like, ‘Oh, (shoot).’ But listen, it's the greatest problem to have."

Meanwhile, his IMSA team is in its first season back at the top DPi class competing for overall victories and the championship. Shank is in his first year as a factory-backed Acura team and acknowledged “there's a lot of pressure on that program.”

Regulations are being changed so that IMSA teams in 2023 will be eligible to compete in the 24 Hours of Le Mans and Shank is positioning himself to be among the first wave of invitees.

“Our plan is to go to Le Mans as soon as possible,” Shank said. “It's really expensive, it costs way more than to run Indy. Like nitrogen, we'll spend $20,000 on nitrogen for the month. The garage, the cost to rent the walls, all the basics to support a team, it is just really expensive and that is planning we've got to be doing now.”

He's set a goal to have all the IndyCar pieces completed by next month when the series resumes, which gives Shank very little time to play out on Buckeye Lake.

Michael Andretti said at the start of the year Ryan Hunter-Reay understood that performance needed to improve for the former IndyCar champion and Indianapolis 500 winner to return to the team in 2022.

Now the team owner has publicly said he expects a driver lineup overhaul for next year — a statement that has kicked IndyCar's “silly season” into high gear.

Andretti already this season dropped from five full-time cars to four, and only Colton Herta and Alexander Rossi are under contract. Herta in May signed a two-year extension through 2023.

Hunter-Reay is at the end of his contract and James Hinchcliffe said he's in a one-year deal.

“My contract’s up. I know Colton and Alex are not. You have to read into that what you will,” Hinchcliffe said. “But there’s been no discussion really about ’22 onwards, yet.”

Andretti has a full stable of prospects with his robust Indy Lights program, which includes Kyle Kirkwood. His sweep at Mid-Ohio was his fifth win in six races, he has a Lights-best six victories, and is the current points leader.

But there's another driver potentially on the market who could find himself at Andretti next year: Romain Grosjean is having the time of his life since moving to IndyCar from Formula One this season and is now considering adding the oval portion to his schedule.

Grosjean is slated to test at Gateway during the month break, and if it goes well he will race his first oval at the end August for current team Dale Coyne Racing. But Grosjean only wants to commit to a full IndyCar schedule if he's with a team that consistently runs for wins — a level Coyne is not at yet.

Grosjean has one podium and one pole through seven races, but he's finished inside the top 10 four times.

There was a brand new red Porsche Cayenne in the parking lot at Mid-Ohio, and Alex Palou copped to buying his first-ever car as a treat to himself.

The 24-year-old is the current IndyCar championship leader with six races remaining. Palou was relatively unknown when he moved to IndyCar last year — for Dale Coyne, in the seat now occupied by Grosjean — after two seasons racing in Japan.

The Spaniard moved to Chip Ganassi Racing for his second season and has had a breakout with two victories, six podiums and a 39-point lead in the standings. He's been so consistent that two-time IndyCar champion Josef Newgarden called Palou “the most complete” driver of the four in IndyCar's current youth movement.

The terms of Palou's deal with Ganassi aren't clear, but he's driving a car sponsored by NTT DATA Corporation — a Japanese multinational information technology service and consulting company headquartered in Tokyo. His love of Japan from his two seasons racing in that country has created a bond with company executives.

Palou briefly mentioned a possible vacation during the IndyCar break but really seemed most interested in preparing to close out a championship.

“I think it’s good to have now a break so we can now go over everything. So many races, so many good moments,” he said. “But there’s some stuff we’ve got to do as a team, me as a driver. It’s good to be in the championship lead so you don’t have to think what to do to get there because we’re already there. It’s just about being stronger and performing every weekend.”