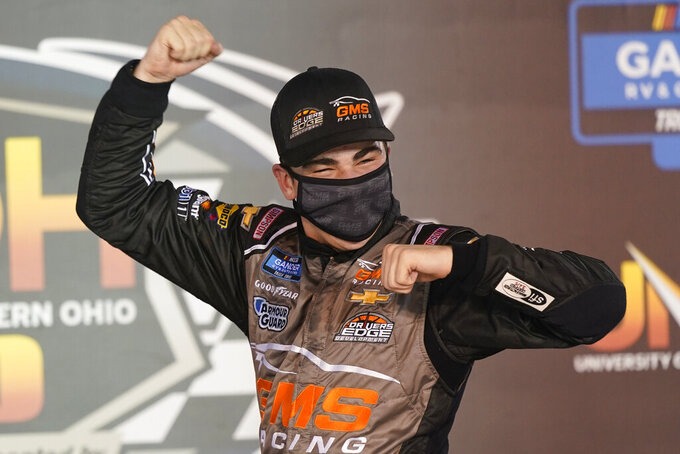 With a bit of disbelief over his fast fall in the NASCAR standings, Ryan Blaney is determined to avoid elimination from the playoffs.

It's a daunting task and just might require an outright win Saturday night at Bristol Motor Speedway, where four drivers will be knocked from title contention. Blaney, who was solidly inside the top 10 of the Cup Series standings all year, has plummeted to last in the 16-driver field.

William Byron, Cole Custer, Matt DiBenedetto and Blaney are the four drivers below the cutline headed into the knockout race. It marks a bizarre collapse for Blaney, who spent 13 weeks ranked fourth or higher in the Cup standings and began the playoffs slotted seventh.

“This whole group, this team, we are not a 16th-place-in-points team,” Blaney said. "We showed it all year. We have had speed. It is just a matter of closing it out. We are way better than that and hopefully we can show it this weekend.”

The demise for the Team Penske group began with the playoff opener when his crew failed to notice a 5-pound bag of lead used for car setup at the shop had not been removed from the Ford prior to inspection at Darlington Raceway. Blaney was docked 10 points, crew chief Todd Gordon was suspended for the race and his 24th-place finish dropped him to 15th in the playoff standings.

But the No. 12 team was also off last week at Richmond, where Blaney finished 19th to fall to the edge of elimination.

“There are things we could have done better as a whole group to make sure we weren’t in this position,” Blaney said. “It is a bummer that we are in this position. It has been a rough two races and the round of 16 is a round that you can’t really screw up and we have managed to have a couple of screwups and find ourselves in this spot.”

Blaney can't afford to ride around the 0.533-mile bullring at Bristol, where officials have sold all 30,000 tickets available to spectators. He knows the race will be aggressive and the crowd is expecting to see the bumping-and-banging that was once a revered part of Bristol's racing.

“I caution those in front of me that I am not going to be behind them for very long if we are faster than them,” he said. ““I would love to say it is another race weekend, but it is our season.”

The circumstances aren't entirely the same, but Matt DiBenedetto returns to Bristol in limbo for the second consecutive year.

DiBenedetto is in his first year driving for Wood Brothers Racing with team options for the next few years. He's not been picked up yet for 2021 and the team is contractually obligated to inform him of its plans by the end of September.

“They heavily expressed they wanted this to be a long-term relationship, something that we build for a long time to come,” DiBenedetto said. “I do not want to go anywhere. I love driving for the Wood Brothers. It’s been a dream come true."

The delay in deciding what to do with DiBenedetto could actually be a Team Penske decision. The Wood Brothers are aligned with Penske and the Penske organization may be trying to find a Cup seat for Xfinity Series driver Austin Cindric.

DiBenedetto faced uncertainty when he raced at Bristol last season days after learning Leavine Family Racing was replacing him with Christopher Bell. He turned in a career-best performance by leading 93 laps before Denny Hamlin passed him with 12 to go. DiBenedetto finished second.

Now he's racing to continue his playoffs and perhaps to keep his job.

“I sure hope it doesn’t come down to just one race as far as my contract stuff for next year," he said.

BOWYER ON THE BUBBLE

Kevin Harvick, Hamlin and Brad Keselowski are the only drivers already locked into the second round. The remaining nine spots aren't exactly up for grabs, but the potential for a surprise elimination exists.

Clint Bowyer holds the final transfer position by just three points over William Byron. Cole Custer trails Bowyer by eight points, while DiBendetto is 25 points behind and Blaney is 27 points out.

Bowyer has very little room for error but has embraced the challenge.

“This is what the playoffs are all about and supposed to be all about,” said Bowyer. “You want the nerve-wracking, nervous, pressure-packed races. I’m a fan and that’s what I would want if I was sitting in the grandstands or watching on television.”