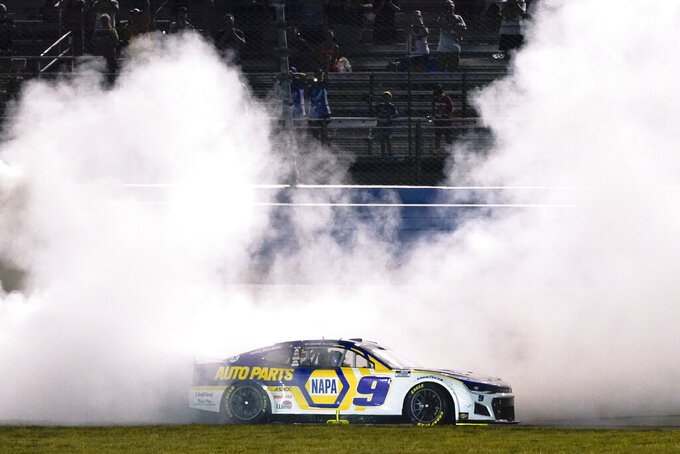 CHARLOTTE, N.C. (AP) — As he prepared for one of the hottest races of the NASCAR season, Chase Elliott said he would use positive thinking to convince himself it wasn't so bad.

And when Elliot was frustrated with his struggling Chevrolet in the early stages at Nashville Superspeedway, his crew chief found his driver receptive to a pep talk that helped NASCAR's current Cup points leader win Sunday night's race.

Elliott has never presented himself as an eternal optimist, In fact, his Hall of Fame father Bill Elliott last year told The Associated Press his son “acts like he’s loading up the covered wagon heading West instead of doing what he loves.”

But the 26-year-old seemed lighter at Nashville and his mood more tolerant, even before he picked up his second win of the season. So as NASCAR's most popular driver heads next to Road America, where he won last year's Cup return after a 65-year absence on the Wisconsin road course, AP asked Elliott about his current mindset.

“I feel like my mindset tries to just stay in the realm of reality, it's always been my approach to just try to be realistic about whatever the situation is,” Elliott told AP on Tuesday. “I do think it’s important to have confidence in your ability and what you’re doing, but I also think it’s important to recognize ‘Hey, if I need to do something different, I’m not too set in my ways, not too stubborn to be willing to at least try to adjust to have a better result or a better approach.’”

When reminded of his father's remark a year ago — a dig at Elliott's perceived negative attitude — the 2020 Cup champion said he doesn't have a glass-half-empty approach. He acknowledged he's very hard on himself and has high expectations, but he's also an Elliott and his extended family was never recognized for their joyful attitudes.

Bill Elliott, despite winning NASCAR's most popular driver award a record 16 times, could be curt and dismissive. His brother, the longtime respected engine builder Ernie Elliott, was often short on words. To this day, the entire Elliott family still lives on family land in Dawsonville, Georgia, and no amount of fame or financial riches has changed them.

“Look, I grew up with my dad and Uncle Ernie and I know a lot of people don’t know them to the extent that I do, but they’ve done this stuff for a really long time,” Chase told AP. "And they’ve seen how this stuff works and when you grow up in an environment that is so well versed — it’s not that they’re not appreciative or don’t recognize how fortunate we are in our lives to call racing a living. I do think we have a very realistic appreciation for that side of it.

“I just at a very young age, I saw a very experienced reality of this world, and, you know, right wrong or indifferent, that’s just how I was raised and that’s just the viewpoint that I watched. It gives me a different approach than a lot of other guys in the series.”

He said his relationship with crew chief Alan Gustafson is so strong because Gustafson understands who Elliott is — Elliott used the word “practical” to describe his approach — and is able to extract what he needs from his driver.

“My goal is to always make the driver the weak link. If he’s the weak link, then I’ve done my job, the team has done their job,” Gustafson told AP about his pep talk with Elliott during Sunday's weather delay. “With him, it’s not an easy thing to do because he’s a pretty strong link. So that’s what I try to do and what I tried to tell him: ‘We’re done messing up and we’re going to get after it, so stick with us, bring your A game, all will be good.’”

Elliott spoke to his father on Monday about his Nashville victory and on Tuesday expected to visit with his uncle at the family shop in Dawsonville. On Wednesday, the die-hard Georgia sports fan will be part of a celebration of Georgia champions at the College Football Hall of Fame.

He treats each day the same and sees no changes in his personality of approach.

“Some days are gonna be really good and there’s some days that aren’t,” he told AP. "If I’m talking to dad, or if I’m talking to Uncle Ernie at the shop today, our conversation is not going to be a whole lot different than it was last week. You know?

“It’s just very, very straightforward, and I appreciate that.”