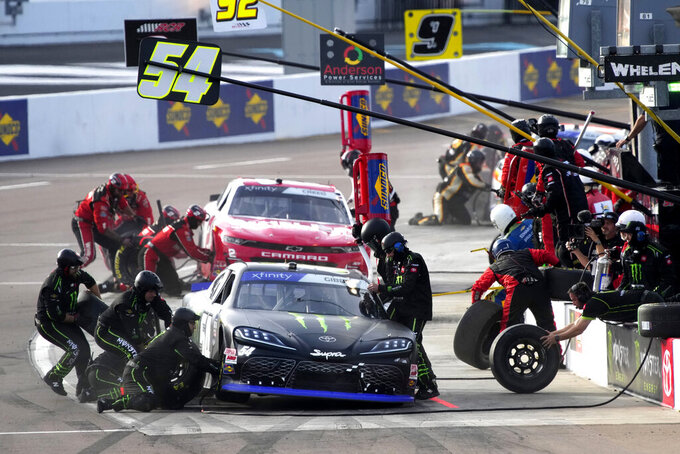 AVONDALE, Ariz. (AP) — Ty Gibbs felt like he embarrassed himself and, more importantly, his family by wrecking a teammate on the final lap last week.

The only way to make up for it would be winning a championship with a clean, aggressive race.

Gibbs pulled it off, wiping away some of the tarnish with a shiny new trophy.

Gibbs took the lead with 21 laps left and held off rival Noah Gragson for his first NASCAR Xfinity Series championship at Phoenix Raceway on Saturday night.

“I can sit here and tell you I’m sorry as much as I can, but it’s not going to fix it,” said Gibbs, who led a race-high 125 laps. “I’ve got to fix my actions. I felt like today I had a good race, felt like I made some good moves.”

The only non-JR Motorsports driver in the winner-take-all finale, Gibbs started on the pole at the 1-mile oval and stayed near the front in changing conditions all evening.

The hyper-aggressive driver kept his cool after wrecking teammate Brandon Jones out of the lead last week in Martinsville to give Toyota its second straight Xfinity championship before his likely full-time move to the Cup Series next year.

Gibbs ducked his No. 54 Toyota under Justin Allgaier shortly after a restart and stretched his lead until Gragson pulled within a couple of car lengths late. The 20-year-old grandson of Hall of Famer and team owner Joe Gibbs kept Gragson at bay and crossed the checkered flag for an emotional victory.

Gragson finished second, Allgaier third and Josh Berry was fourth in the championship after taking 13th on Saturday.

Gibbs was the wild card in the finale four after ruffling a few fenders in his second Xfinity season. Gibbs got in a fistfight with Sam Mayer after an Xfinity race and NASCAR fined him $75,000 for a Cup Series pit road incident that nearly sent Ty Dillon’s car into personnel.

Gibbs took his aggressiveness to a new level last week by taking Jones out of the championship round just to win a race.

Gibbs was remorseful in the build-up to the Xfinity finale, saying he hoped he learned from his mistakes. He certainly seemed to, driving aggressively but not carelessly, to win a title for himself and his grandfather.

“Just think how tough you have to be, how resilient you have to be after going through that last week,” Gibbs' crew chief Chris Gayle said. “The hardest thing for him was going to be all the stuff leading up to it. When you got between these two walls on this the racetrack, that’s where he shined today.”

The 24-year-old Gragson was near the lead most of the evening until a slow pit stop dropped him to eighth with 40 laps to go. He had been one of Gibbs' biggest critics after being wrecked by him in the past, saying he would retaliate if given the chance.

Gragson never got it, rallying to take second in his last Xfinity start before heading to the Cup Series with Petty GMS next year.

“I felt like if I was any closer, I would have got him, but I wasn’t,” said Gragson, who shook hands and congratulated Gibbs after the race.

The 36-year-old Allgaier had his best chance to win his first Xfinity title in his fifth playoffs, keeping his No. 7 Chevy running up front all race. He lost momentum when he tried to go high and got passed by Gibbs, adding a third to the second he took in the 2020 Xfinity playoffs.

“Tonight was a difficult, but Ty had the best car,” Allgaier said. “They executed all night, made good adjustments and were good on pit road. ... Probably the hardest part for me is none of us from JR Motorsports won.”

Berry had to fight his way back after a slow early pit stop dropped him to 15th, and was third on the restart with 30 laps to go. He tried to go high around the first turn, wobbled and bounced off the wall, dropping to 23rd in his first Xfinity playoffs.

“I could basically say I made a mistake, got too high and had a moment, but I had every intention of running up there and creating some momentum on the backstretch,” Berry said.