Rosenqvist staying with McLaren but could move to Formula E 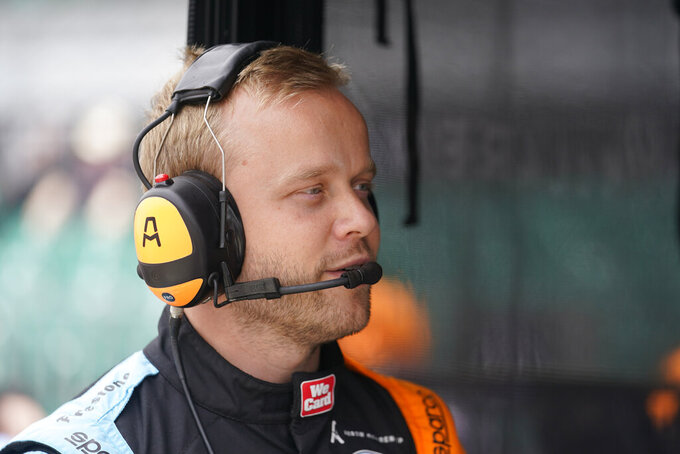 Felix Rosenqvist, of Sweden, talks with his crew before the final practice for the Indianapolis 500 auto race at Indianapolis Motor Speedway, Friday, May 27, 2022, in Indianapolis. (AP Photo/Darron Cummings)

McLaren isn't done with Felix Rosenqvist and on Thursday signed the Swedish driver to a multi-year contract extension. The team just didn't designate where Rosenqvist will drive.

McLaren indicated Rosenqvist could be shifted to its new Formula E program when it launches in 2023.

“McLaren Racing is currently in the process of evaluating its driver lineups for 2023 with the newly formed McLaren Formula E Team set to embark on its debut season in the all-electric racing series, and plans to expand Arrow McLaren SP into a three-car team with Felix set to be driving in one of the two series,” the team said.

Rosenqvist is in his second season driving the No. 7 in IndyCar for McLaren, but the team is expanding to three cars next season and has already announced 2016 Indianapolis 500 winner Alexander Rossi will be part of the lineup. The jockeying for Rosenqvist's seat has flipped over the last few months with reigning IndyCar champion Alex Palou, six-time IndyCar champion Scott Dixon, rising star Rinus VeeKay and even Rosenqvist all mentioned as possibilities.

Rosenqvist is close with current IndyCar teammate Pato O'Ward, and his recent performance has helped his case for keeping his job. He has four consecutive top-10 finishes and was fourth in the Indianapolis 500.

“With the team expanding into Formula E next season, it provides additional opportunities for me both in the USA and Europe and I look forward to being in a position to announce my plans in the coming weeks," Rosenqvist said. "I’m excited and grateful to be given this opportunity to explore the new options available to utilize my experience to help McLaren start 2023 on the strongest possible footing.”

Rosenqvist is in his fourth full season of IndyCar, his first two years spent with Chip Ganassi Racing. He was rookie of the year in 2019 and scored his only IndyCar win the next season.

McLaren Racing head Zak Brown called Rosenqvist “a fantastic racer, with a lot of experience in many different types of racing cars.”

“As a proven race winner in both categories, it was important for us to secure his talent within the McLaren Racing family as we work to finalize our plans for 2023,” Brown said. "His experience in Formula E would be invaluable as we head into this exciting new era of racing for McLaren Racing but he has also made a fantastic contribution to our IndyCar team. I look forward to working together with him to finalize the best opportunity for him next season.”