Recovering Lauda hopes to be back working with Mercedes soon 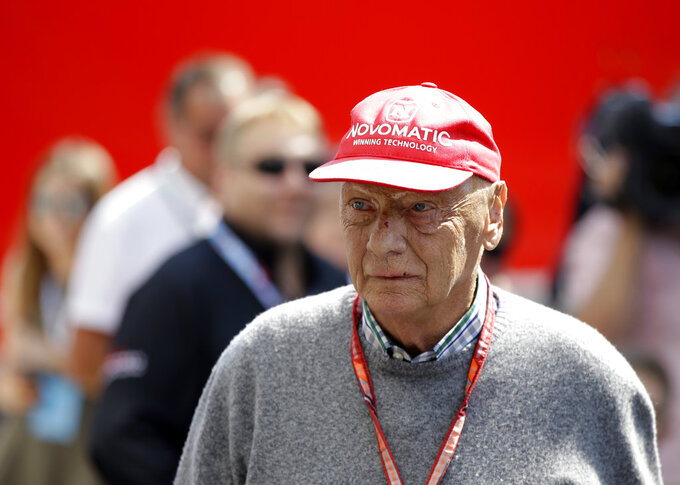 FILE - In this July 7, 2018 file photo former Formula One World Champion Niki Lauda of Austria walks in the paddock before the third free practice at the Silverstone racetrack, Silverstone, England. Niki Lauda hopes to “soon” be back working with Mercedes as he continues his recovery from a lung transplant. The three-time Formula One champion was smiling and cheery as he posted a message on the Mercedes team’s Twitter account on Saturday, Nov. 24. (AP Photo/Luca Bruno, file)

ABU DHABI, United Arab Emirates (AP) — Niki Lauda hopes to be back working with Mercedes soon as he continues his recovery from a lung transplant.

The three-time Formula One champion appeared cheerful as he posted a message on the Mercedes team's Twitter account on Saturday.

Speaking softly but clearly, Lauda says "the important message is I will be there soon" before thanking all his fans for the "unbelievable" support he has received.

The 69-year-old Lauda, who received a new lung on Aug. 2, is non-executive chairman of Mercedes. He has had a close working relationship with five-time F1 champion Lewis Hamilton and was involved in helping to sign the British driver from McLaren for the 2013 season.

Hamilton has won four of his titles with Mercedes, including the past two and in 2014 and '15.

In 1976, he was badly burned when he crashed during the German Grand Prix, but made an astonishingly fast return to racing just six weeks later.