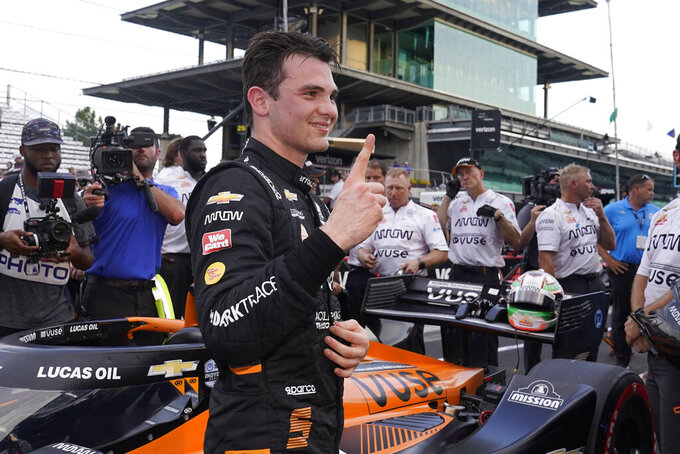 After another few moments, the stewards made it official — the 22-year-old Mexican in championship contention earned his third pole of the season and fourth overall.

Just seconds after Will Power thought he'd be taken the No. 1 spot after besting Romain Grosjean, O'Ward crossed the yard of bricks in 1 minute, 10.7147 seconds to pass Power for Saturday's race. Power went 1:10.7214.

“I wanted to make sure this was a turning point," O'Ward said. “We've had a very tough last three races and we need to get back to victory lane. A lot can happen, but we're on the right track."

It was a dramatic start to what could be a wild, wooly three-race weekend. Grosjean, the Swiss-born French driver, appeared headed toward a second straight pole on Indy's 14-turn, 2.439-mile road course.

Instead, Power knocked Grosjean out of the top spot then O'Ward followed suit and the stewards denied an appeal from Team Penske.

“On the first lap, I was up and he started slowing and warming his tires and I had to back up. That’s what it was about," Power said. “It wasn’t blatant but yeah, it’s fine. The top four or five cars are all on the same tenth, so its anyone’s race.”

The incredible finish wasn't the only big surprise.

Twenty-year-old rookie Christian Lundgaard qualified fourth in his IndyCar debut, just ahead of American Colton Herta. The Danish driver who had been climbing the Formula One ladder series looked comfortable after Rahal Lanigan Letterman hired him earlier this week.

“I'm obviously enjoying myself and trying hard," he said. “It’s amazing to be here and to be able to prove myself. I didn’t expect to be here."

Those who didn't make the 12-car shootout were equally surprising.

Six-time series champion Scott Dixon of New Zealand will start 26th in the 28-car field after spinning out and rolling backward down the track on his final qualifying lap. He needs one more win to tie Mario Andretti for second all-time with 52.

“It was a horrible drive, so tough day for us,” said Dixon who drives the No. 9 Honda for Chip Ganassi Racing.

Two-time series champ Josef Newgarden, who is fourth in points, also was eliminated in the first round. He qualified 14th but will start 20th after series officials docked him six starting spots for making an unauthorized engine change following last week's race in Nashville.

Helio Castroneves, the Brazilian who won his record-tying fourth Indianapolis 500 in May, will start 23rd after going 1:11.7319. And seven-time Cup champ and 45-year-old IndyCar rookie Jimmie Johnson will start 22nd in Ganassi’s No. 48 car.

“That was a good session for me,” Johnson said. “This is a huge accomplishment for me.”

The only driver who may have been happier was O'Ward.

“I’ve never felt so good about running on the Indy road course," he said. “We’re going to get some good points tomorrow.”

Indianapolis Motor Speedway officials will honor longtime radio and television broadcaster Bob Jenkins with a video tribute before the races Saturday and Sunday. Jenkins, known as the radio voice of the Indianapolis 500, died Monday after battling brain cancer. He was 73.

NBC also said it will broadcast a story about Jenkins, which is narrated by Hall of Fame media personality Robin Miller.

Herta looked like he might face a daunting race weekend after his practice session ended early because of mechanical problems. He complained about a bad clutch and an oil pressure problem, but his crew fixed the car quickly enough to post a 1:10.7631.

It's a welcome relief after dominating last weekend only to crash hard into a tire barrier with six laps to go while running second. He finished 19th at Nashville and is eighth in points.

Felix Rosenqvist of Sweden thought he earned a spot in the final qualifying group but the lap was disqualified because it came after Dixon's spin. ... Another Swede, Marcus Ericsson, replaced Rosenqvist in the pole shootout but the two-time race winner's pole hopes evaporated when the No. 8 Honda nearly spun in the midsection of the course. ... Rinus Veekay, the young Dutch driver who won Indy’s last road-course race in May, will start ninth for team owner Ed Carpenter. ... Arrow McLaren SP announced Friday it has extended a partnership with Copper Moon Coffee. The Indiana-based company first joined the team in 2021. ... U.S. Olympian Andrew Capobianco will ride in IndyÇar's two-seate piloted by Mario Andrett, before Saturday's race. Capobianco earned seven All-American honors while diving for Indiana University and earned a silver medal at the Tokyo Games. ... The Andretti Formula E team has hired Jake Dennis as the driver of its No. 27 all-electric race car, which will use a BMW drivetrain.