Out of the way! NASCAR contenders want traffic to pull aside 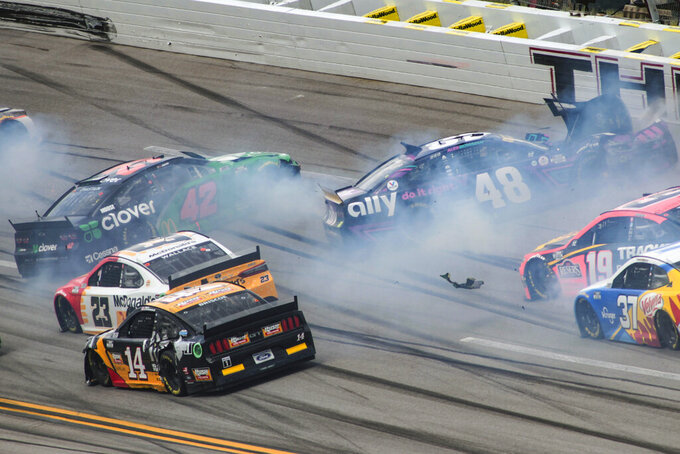 KANSAS CITY, Kansas (AP) — Daniel Suarez refused to get out of Martin Truex Jr.'s way and it ultimately ruined Truex's race. Tyler Reddick did the same to William Byron, and Chase Briscoe held firm to his right to race hard when battling with Denny Hamlin.

A conversation on driver code and on-track etiquette is raging right now in NASCAR, and with it comes a heated debate on the expectations of non-playoff drivers. If a title contender is trying to gain track position, should another driver clear the lane for an easy pass?

It's been a touchy topic since the playoff format was introduced in 2004. NASCAR, unlike any stick-and-ball sports, permits everyone to race in the postseason even if they aren't in title contention. It puts a mix of slow cars and mediocre drivers on the same track as the superstars racing for the final trophy.

With two races remaining to lock in the championship field, conversation has turned to how non-playoff drivers should be expected to race Sunday at Kansas Speedway. It's the middle race of the third round of the playoffs and only Kyle Larson has earned a slot in the Nov. 7 winner-take-all finale at Phoenix.

Seven others are vying for the remaining three berths in the championship round — at minimum Truex and Joey Logano are in must-win situations — and there's a high probability of desperate racing come Sunday.

Especially when they encounter stubborn drivers who won't heed way on the racetrack.

When Briscoe raced Hamlin hard for position late in last week's race at Texas, Hamlin fumed about a lack of situational awareness.

“There’s cars racing for a championship," Hamlin wrote to Briscoe on Instagram. "Perhaps when you learn give and take you will start to finish better.”

But Briscoe, a rookie driving for Stewart-Haas Racing, held his ground.

“I get paid to race, just because you guys are racing in the playoffs doesn’t mean I’m just gonna wave you by,” Briscoe wrote back to Hamlin. "One of the best cars we’ve had all year and I was trying to take advantage of it. I understand you guys are racing for a championship which is awesome for you guys but I’m racing for a job and results let me keep that job.”

Suarez had a similar attitude after his contact with Truex knocked Truex out of the race.

“I have a lot of respect for the guys in the playoffs, but one thing is respect and (another) is taking advantage of the situation," Suarez said.

The schism is widening between today's veterans — many of whom were browbeaten in their early years about driver etiquette by Hall of Famers Dale Jarrett, Rusty Wallace, Jeff Gordon and Tony Stewart, to name a few — and a younger crop of drivers who don't really seem to care about tearing up race cars or playing by an unwritten set of rules.

“There’s a complete lack of respect everywhere, all over the place, so it doesn’t matter if it’s a playoff driver or a non-playoff driver,” Kyle Busch said. “The way all this has gone on the last four or five years with the newer generation coming in has completely ruined it from what it used to be. It might be exciting for the fans, but all you get is more torn up stuff."

Attrition among the playoff drivers at Texas mitigated a few awful finishes and there's still time to salvage some championship runs. Six of the seven drivers trying to make it to the finale are previous Kansas winners, including Hamlin and Logano, who are tied with Gordon, Kevin Harvick and Jimmie Johnson with three wins each on the final 1.5-mile speedway on this year's schedule.

Logano, the defending race winner, is in the eighth and final slot in the playoff field after last week's engine failure. He's 43 points below the cutline and Logano likely needs to win at either Kansas or Martinsville next week to advance.

A win by any of the seven contenders on Sunday would move them on to the finale, but both Hamlin and Ryan Blaney can clinch a spot on points with help from others. But Hamlin doesn't want his fate in the hands of other drivers because although he's third in the standings, he's only nine points above the cutline.

“We have to assume, based on past results, that one of those guys at the bottom are going to go out and win these next two races,” Hamlin said. “If they do that, then that cutline moves right to me."

Reigning Cup champion Chase Elliott, Brad Keselowski, Truex and Logano are all below the cutline. Of the eight drivers vying for the title, only Larson, Blaney and Hamlin have yet to win a Cup championship.

Elliott is the first driver below the cutline and although he won at Kansas in the 2018 playoff race, was second in the 2019 playoff race and sixth last October, he doesn't have a single win on an oval this year. Both of his victories were on road courses.

“The results are what they are and whatever the reason may be doesn’t matter," Elliott said. "You either do or you don’t, and we haven’t checked that box yet this year. I don’t feel like it’s been a lack of performance. On certain ovals, I feel we like we’ve been really solid. I feel like we’re just as capable as a year ago or the year before that.”

Larson is the 10/11 favorite to win Kansas, per FanDuel. ... Kansas marks the final race of the season in which the rules package of 550 horsepower will be used this season. Seven drivers have combined for 11 victories in that configuration. Larson has three 550 wins, followed by Blaney and Kyle Busch with two each. Hamlin is the only other playoff driver with a win on a 550 track — at Las Vegas in the second round of the playoffs. ... NBC Sports pit reporter Parker Kligerman will race Sunday for Gaunt Brothers Racing in his first Cup start since 2019.