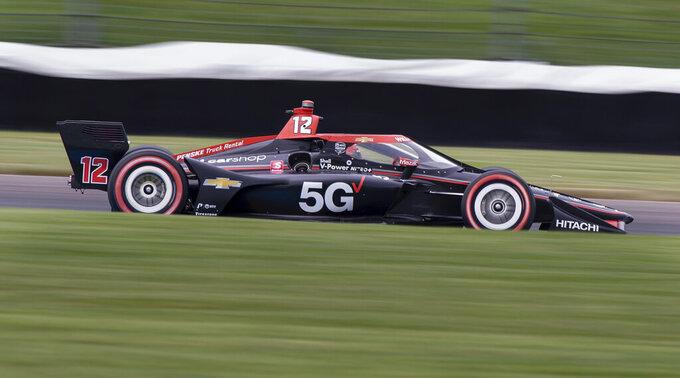 Will Power, of Australia, drives along the course during a practice session for the IndyCar auto race at Indianapolis Motor Speedway, Friday, Aug. 13, 2021, in Indianapolis. (AP Photo/Doug McSchooler)

With drivers from NASCAR's top two series and the IndyCar Series all in town for a rare crossover weekend, Castroneves expected things to quickly shift into high gear at the busiest venue in motorsports.

Especially on a historic weekend.

A year ago, the Indianapolis Grand Prix was postponed from its normal slot in early May to the July 4 weekend. That marked first time all three series competed in one place. But NASCAR's top drivers still ran on the big 2.5-mile oval while IndyCar hit the 2.4-mile road course.

This time, organizers cut the distance of the traditional 400-mile Cup Series race in half, renamed it the Brickyard 200 and moved it to the road course after seeing last year's epic Xfinity Series race finish on the same track.

Some drivers contend the Brickyard should be run on the oval. AJ Allmendinger, a road course specialist who was near the front of last year's Xfinity pack, doesn't mind the change.

“There are certain places that if you just say the name of the racetrack, the generic fan or maybe not even a fan of motorsports, they know what that place is," he said. “That’s what Indy means to me. You can say ‘ Yeah I won at Indy, I won at the racetrack' and they know how big that is. I don’t really have an opinion on whether it's the road course or the oval, a win at Indy is a win at Indy and when you go in there, you still get to kiss the bricks."

NBC analyst Dale Earnhardt Jr. turned some laps on the new course and the retired NASCAR star described it as “fun" and better than it appears. He will spend the weekend calling the race atop a scissors lift in the seventh turn.

In all, 107 total cars are expected to compete in three races with qualifying rounds scheduled for Friday, Saturday and Sunday. Organizers said ticket sales for Saturday's doubleheader — the IndyCar race and Xfinity's Pennzoil 150 — are ahead of last year's pace.

The 28-car starting grid will be the largest for an IndyCar race, other than the traditional 33-car field for the Indianapolis 500, in a decade. It also marks the first time since 1964 that NASCAR has run consecutive road-course races.

Series officials intend to monitor this weekend closely for other ways to grow the sport.

“If this is successful it could pave the way for some really, really cool opportunities,” NBC analyst Jeff Burton said. "I think it will open some eyes to new opportunities. I think there are a lot of eyes that will be paying attention to see how that garage works.”

NBC holds the broadcast rights to all three series and has slotted some of this season’s races, such as last weekend’s Cup and IndyCar races, as television doubleheaders. Saturday’s races will be shown back-to-back on cable channel NBCSN while the NASCAR Cup Series race will be broadcast on network television Sunday.

The tripleheader also has created some intriguing side stories.

Team Penske president Tim Cindric will call the race for two-time IndyCar champ Josef Newgarden on Saturday , then can spend the rest of the weekend watching his 22-year-old son, Austin, compete in the Cup Series.

It could be just the start of something much bigger.

“I think there are a lot of drivers in IndyCars, Cup cars and sports cars who want to do a lot more things," NBC's IndyCar analyst Paul Tracy said. “Five years ago, that was probably not possible. Now with a lot of this being under one TV umbrella, I think that’s a lot more possible. I think you could see things that haven’t you really seen since the 1970s when A.J. (Foyt) and Mario (Andretti) would just go drive everything."