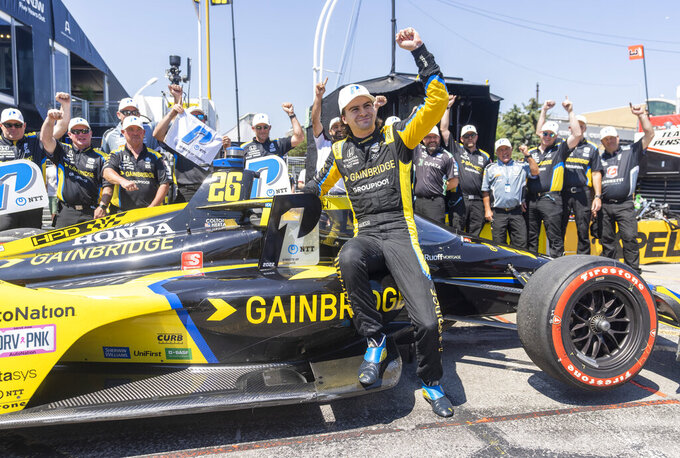 FILE -Colton Herta of the United States celebrates winning the pole position following qualifying at the 2022 IndyCar Toronto, in Toronto, Saturday, July 16, 2022. Colton Herta has signed a four-year contract extension with Andretti Autosport that ties him to the IndyCar team through 2027. The agreement announced Tuesday, Oct. 25, 2022, includes a concurrent contract extension with sponsor Gainbridge, which could signify the end of Herta’s Formula One ambitions and acknowledgement that Michael Andretti is not getting an F1 team. (Mark Blinch/The Canadian Press via AP, File)

Colton Herta so firmly believes Andretti Autosport can return to the top of IndyCar that he announced a four-year extension Tuesday through 2027 before Roger Penske or Chip Ganassi even got a shot at signing the American.

Herta's current contract with Andretti runs through next season, and with his Formula One aspirations temporarily on hold, Herta believes he can win in IndyCar with Michael Andretti.

Andretti Autosport last won the IndyCar championship in 2012 and last won the Indianapolis 500 in 2016 with Alexander Rossi. With Rossi now headed to McLaren next year, Herta entering his fifth IndyCar season will be Andretti's most veteran series driver.

“I see what's going on in the background, I see the drive and there's a lot of investment coming into the team,” Herta said in a telephone interview with The Associated Press. “I believe in the future. It didn't matter what anyone else had to say. I believe in where Andretti is headed.”

The investment comes from a concurrent four-year extension announced with sponsor Gainbridge, a loyal Andretti partner. And the belief might come from hope that a path to F1 might still be in play for Herta with Andretti.

“Racing in F1 is still a goal of mine. I still think it's a possibility. But it's not going to happen next year, obviously,” Herta told The AP. “But in the next few years? It can still be a possibility. There's no clear path for me for next year. Does that mean that Michael could not get a team for '24? A lot of things can happen.”

And so comes to a close the rollercoaster year for the 22-year-old Herta, who at times seemed poised to become the first American driver on the F1 grid since Rossi in 2015. His chance was scuttled by the FIA, the governing body for F1, which would not grant Herta the Super License required to compete in the global series.

So he signed an IndyCar renewal with Andretti Autosport, as Michael Andretti tries to get two-car Andretti Global onto the current 10-team F1 grid. Andretti, with assistance in part from Gainbridge, had hoped to convince the FIA to expand the grid and planned to bring Herta with him.

But the existing F1 teams are unwelcoming to grid expansion and wealth redistribution, and although Herta was free to leave Andretti for an F1 opportunity under his existing contract, the lack of a Super License has him currently relegated to IndyCar.

He said this extension can move him to F1 with Andretti should Andretti land a team, but leaving the Andretti IndyCar organization for an F1 opportunity will be more complicated in the future.

From the IndyCar perspective the signing is huge: The No. 10 at Chip Ganassi Racing is expected to open when Alex Palou moves to McLaren in 2024, reigning series champion Will Power is entering a contract year on the No. 12 with Team Penske, and six-time IndyCar champion Scott Dixon turns 43 next season — his 21st year with Ganassi.

There's been a ton of F1 hype surrounding Herta, who this year signed a testing contract with McLaren. But Herta presently lacks the points required to obtain F1's mandatory license, in large part because IndyCar is undervalued in the ranking system. The FIA does not govern IndyCar, or NASCAR for that matter, and essentially rates both as mid-pack series.

Red Bull had asked that Herta, a seven-race winner who in 2019 became IndyCar’s youngest ever winner days before his 19th birthday, be granted a waiver for a Super License. Had the FIA not refused, Red Bull had hoped to put Herta at its AlphaTauri junior team next season.

The lack of a license essentially shut the door on F1 for Herta for now, and the Californian did not even attend last week’s United States Grand Prix in Austin, Texas.

Herta was a popular figure at the Miami Grand Prix in May when he attended as a guest of McLaren, asked to sit in the F1 car and requested a diagram of the steering wheel. When Herta showed up two months later at a McLaren F1 test in complete preparation, he wowed on the track, word spread, and rival teams developed sudden interest in landing the American.

“I think IndyCar should probably be re-evaluated in the Super License system,” Herta told The AP. “I think IndyCar is undervalued. I understand we're not an FIA championship, we don't bring any money or anything like that to the FIA, so I guess it makes more sense that they draw attention to their championships.

“But I think to be fair, if you are going to claim to be the top championship in the world with the best drivers, you should probably give everyone a fair shot."

Herta said he fell out of McLaren's rotation when he began speaking with AlphaTauri.

There's also less urgency surrounding Herta now that Williams plans to promote F2 driver Logan Sargeant of Florida into F1 next year should the 21-year-old earn his Super License by season's end. That would give Williams the win in scoring the newest American driver from F1's fastest-growing market.

Herta and Sargeant grew up karting against each other and both tried Europe as teenagers, but Herta returned to America and Indy Lights when finances ran thin. The wealthier Sargeant was able to stay the course in Europe.

“I was always about a year ahead of him, but we had similar paths,” Herta said. “I'm really happy to see this happening for him and it's so cool to see an American make it.”