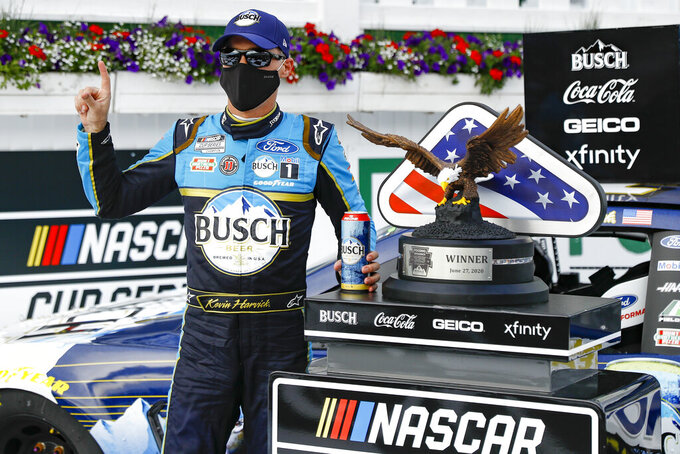 FILE - In this June 27, 2020, file photo, Kevin Harvick celebrates in the winners circle after winning the NASCAR Cup Series auto race at Pocono Raceway in Long Pond, Pa. Denny Hamlin and Kevin Harvick flipped their 1-2 finish in Pocono’s doubleheader weekend last year but they each come back for this weekend’s races winless and trying to chase Kyle Larson. (AP Photo/Matt Slocum, FileP

LONG POND, Pa. (AP) — Denny Hamlin swept Pocono as a rookie in 2006 and won again last season, his track record-tying sixth victory. Kevin Harvick joined Hamlin in the win column on the same weekend at Pocono in 2020, his first victory at the tri-oval track, and they both left the June twinbill weekend seemingly positioned as the drivers to beat in the championship race.

Chase Elliott spoiled their chances when he won the 2020 title.

This season, NASCAR wonders, can anyone catch Kyle Larson, who goes to Pocono Raceway for a weekend doubleheader on a four-race winning streak that includes the non-points $1 million All-Star Race?

Hamlin and Harvick suddenly have a more pressing question to answer than whether they can win the championship.

Can either star driver win a race?

Both are winless — a year after Harvick won a series-best nine races and Hamlin counted the Daytona 500 among his seven victories — and hope to reverse the trend at Pocono. They did, in fact, flip results last year when Harvick and Hamlin went 1-2 in Saturday’s race and Hamlin and Harvick went 1-2 in Sunday’s race. Pocono Raceway is the site of the only NASCAR doubleheader this season (325 miles Saturday; 350 Sunday).

“There is a panic button. I’m not really there yet,” Hamlin said. “Frustrated, yeah, because you want to go to the racetrack and know that you’ve got a car capable of being the fastest, but again, we’ve got a few weeks to really start looking at that and say, ‘OK, we really have to catch up here.’”

Harvick finished fifth last week at Nashville and Hamlin was 13th — he has one top 10 over his last four starts.

Harvick won the 2014 NASCAR championship in his first season driving for Stewart-Haas Racing. He hasn’t finished worse than eighth — with a championship, a runner-up, three third-place finishes and a fifth — over his time at SHR. But the team has struggled all season and none of its four Cup drivers have a win through 17 races. Harvick had four wins at this point last season but he’s led only 39 laps this year. SHR doesn’t have the speed to challenge Larson or Hendrick Motorsports.

Harvick said the No. 4 Ford team is “not to that point” where it can start winning weekly.

“I don’t think we can correlate, just because we had success last year, it’s going to equal success this year,” Hamlin said. “Now, over the long term, I would say whatever I’m doing at the race track is working because it’s working with multiple cars, multiple different aerodynamic packages. I think we always will have an advantage when we go there simply because of how my driving style fits that track.”

Larson, meanwhile, has been the talk of NASCAR as he rebounded from a nearly season-long suspension into the hottest driver in the field. Jimmie Johnson in 2007 was the last to win four straight Cup races.

It’s the time of the NASCAR season when drivers start the process of trying to find a job for next year.

Matt DiBenedetto is again on the free agent market because Team Penske announced already that Xfinity Series champion Austin Cindric would move to the Cup Series next year in the No. 21 Ford with the Wood Brothers. DiBenedetto is in his second season driving the No. 21, a car that has a Penske affiliation and is easily the best job of his NASCAR career.

But there could be hope for DiBenedetto to hang onto that seat, after all.

Brad Keselowski appears headed to Roush Fenway Racing for next season, which would free the No. 2 Ford at Penske. Keselowski said he’s months away from being able to announce his 2022 plans.

“We have a contract with Brad for the rest of the season and anything he’s going to do or we’re going to do, we’ll make the announcement properly at the right time,” Roger Penske said.

But with the No. 2 open, could Cindric, son of Team Penske president Tim Cindric, instead go directly into that car? Penske was noncommittal.

“The season isn’t even over yet, so at the moment we haven’t made any permanent decision on drivers and obviously there's a lot of moving parts,” Penske said.

DiBendetto made the playoffs for the first time in his career and scored a career-best 11 top-10 finishes during his first season in the No. 21. He’s 19th in the standings now and lacks the consistency he had a year ago, but the team earlier this month replaced crew chief Greg Erwin with engineer Jonathan Hassler. DiBenedetto has dropped two points in the standings since the crew chief change.

“I love driving for the Wood Brothers and I love having our affiliation with Penske and with Ford,” DiBenedetto said. “Ford is family. People think we’re just happy to drive these Mustangs, but Ford is family. But what happens next year? Your guess is as good as mine and that’s 100 percent God’s honest truth.”

Larson is a 9-4 favorite to win Saturday, according to FanDuel Sportsbook. ... Bubba Wallace heads to Pocono, the site of his first Cup start, in 22nd place and without a top-10 finish in his first season driving for the Michael Jordan-owned 23XI Racing team. Wallace was last year’s NASCAR community champion for his work with his foundation. He used the $60,000 donation in part to help kids in need. “We’re still trying to figure out ways we can uplift communities around us,” Wallace said. ... Pocono CEO Nick Igdalsky has not ruled out another run at an IndyCar race after the series wrapped up its seven-year run in 2019. “I do want to engage IndyCar again,” he said.