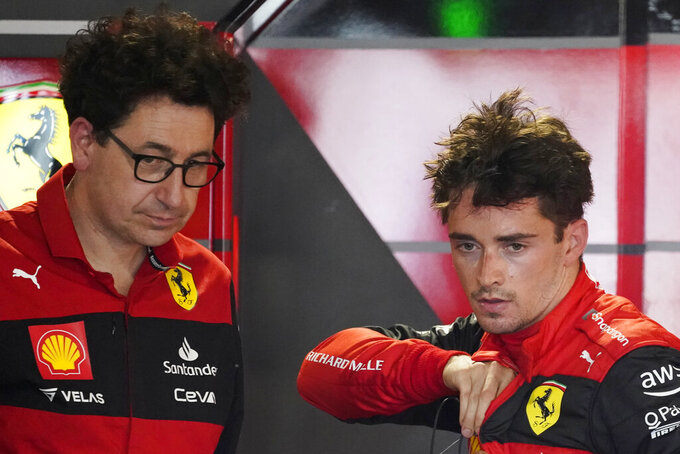 FILE - Ferrari driver Charles Leclerc of Monaco speaks with Ferrari team principal Mattia Binotto following the first practice session for the Formula One Miami Grand Prix auto race at the Miami International Autodrome, on May 6, 2022, in Miami Gardens, Fla. Ferrari team principal Mattia Binotto is leaving the team at the end of next month after four years in which they often struggled to keep up with Formula One’s leaders. Binotto has been with Ferrari for 28 years and took over the team principal role in 2019. The team was winless in 2020 and 2021. It started 2022 promisingly as Charles Leclerc won two of the opening three races. (AP Photo/Darron Cummings)

MARANELLO, Italy (AP) — Ferrari is parting ways with Mattia Binotto after 28 years — four as head of the Formula One team — following a hideous season of botched strategy calls that cost Charles Leclerc any chance to contend for the championship.

Leclerc opened with two wins in the first three races and seemed poised to challenge Max Verstappen for the F1 title, a prize no Ferrari driver has won in 15 years. He finished nearly 150 points adrift and without a win since July.

Binotto's departure was rumored for the last few months as Verstappen and Red Bull ran away with the drivers' and constructors' championships.

Ferrari's performance was an improvement on 2020 and 2021, when it didn't win any races, but falling so far behind after a promising start frustrated Leclerc and the fans.

Leclerc was angry at the team when a mistimed pit call cost him the chance to win his home race at the Monaco Grand Prix in May. At the British Grand Prix he was left on old tires and overtaken by teammate Carlos Sainz Jr. for the win. This month, Leclerc had no chance to challenge for pole position in Brazil when Ferrari put intermediate tires on his car while everyone else was on slicks.

Another botched pit stop at the Dutch Grand Prix in September saw only three tires initially fitted to Sainz's car and was seen as a symbol of Ferrari's difficulties.

“With the regret that this entails, I have decided to conclude my collaboration with Ferrari,” Binotto said in a statement, adding he felt “serenity” at having done his best.

The team did not immediately name Binotti's successor but said its choice “is expected to be finalized in the new year.”

Ferrari CEO Benedetto Vigna paid tribute to Binotto "for leading the team back to a position of competitiveness during this past year. As a result, we are in a strong position to renew our challenge, above all for our amazing fans around the world, to win the ultimate prize in motorsport."

Ferrari last won a drivers’ title with Kimi Raikkonen in 2007 and its last constructors’ title followed a year later.