F1 won't race in Russia this year after Ukraine invasion 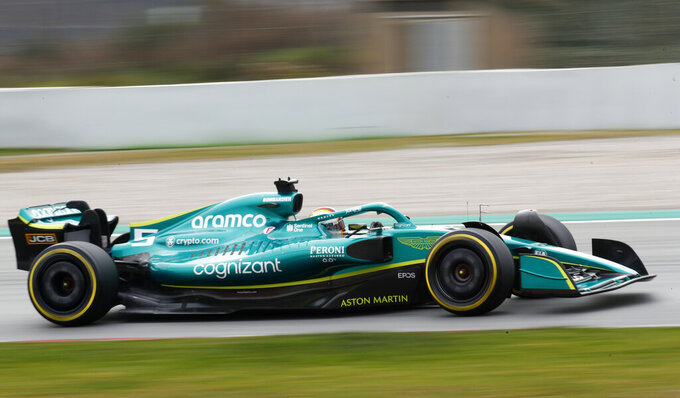 Aston Martin driver Sebastian Vettel of Germany steers his car during a Formula One pre-season testing session at the Catalunya racetrack in Montmelo, just outside of Barcelona, Spain, Friday, Feb. 25, 2022. (AP Photo/Joan Monfort)

LONDON (AP) — Formula One has pulled its race from Russia following the country's invasion of Ukraine, saying Friday it would be “impossible” to hold the race in Sochi under the current circumstances.

The Russian Grand Prix had been scheduled for Sept. 25.

“We are watching the developments in Ukraine with sadness and shock and hope for a swift and peaceful resolution to the present situation,” F1 said in a statement. “Formula 1, the FIA, and the teams discussed the position of our sport, and the conclusion is, including the view of all relevant stakeholders, that it is impossible to hold the Russian Grand Prix in the current circumstances.”

Four-time F1 champion Sebastian Vettel said Thursday he would not race in Russia, and current champion Max Verstappen agreed with him but stopped short of saying he would skip the event.

Drivers widely welcomed the decision Friday, with Pierre Gasly and Lando Norris saying they would not have raced in Russia even if F1 had decided to go there.

“When I saw what Seb said yesterday, I completely supported him and found it the right move and something I would have taken to (F1 CEO) Stefano (Domenicali). Because we also have our say,” Gasly said. “I’m personally affected, having some people close to me who are in Ukraine. It’s a very difficult situation and very scary."

The Russian invasion of Ukraine drew other punitive measures in the sporting world, including UEFA stripping St. Petersburg of hosting the Champions League final on May 28 and replacing it with the Stade de France outside Paris.