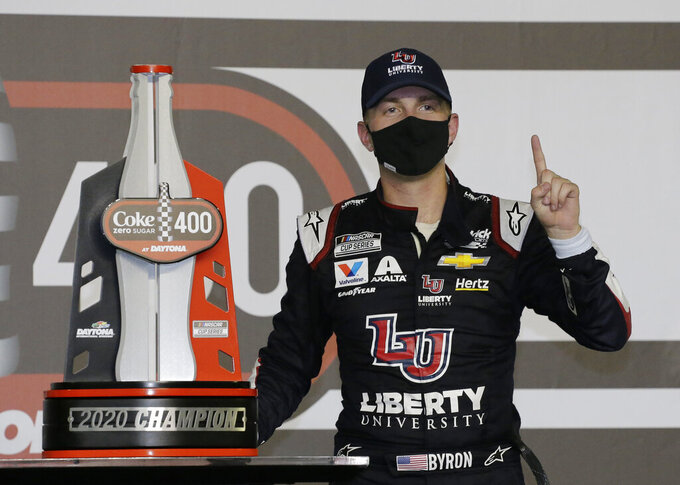 The extension was finalized in early August and announced Tuesday, just days after Byron's win at Daytona International Speedway earned him a berth in NASCAR's playoffs.

Byron is in his third full season driving the No. 24 Chevrolet for Hendrick and the first driver other than Jeff Gordon to win with that entry. Gordon won 93 times with the iconic Hendrick No. 24.

Chad Knaus, in his second season as Byron's crew chief, is in talks with the Hendrick organization to extend his contract beyond its expiration at the end of this year. Liberty University, the sponsor of the car, is signed through 2021.

Byron is a 22-year-old Charlotte native and takes business communications classes remotely through Liberty. He grew up rooting for the Hendrick organization and was developed in a NASCAR program for future stars. Byron spent one full season in the Truck Series before winning the Xfinity Series championship in 2017 driving for JR Motorsports, a Hendrick affiliate.

He was promoted to Cup the next year and made the playoffs in his second season. He finished 11th in the final standings in 2019.

Byron went to Daytona battling Hendrick teammate Jimmie Johnson, the seven-time series champion, for one of the final playoff berths. It was a faceoff of Hendrick's next generation, led by the crew chief who won seven titles with Johnson, against the retiring veteran.

Johnson was eliminated by a late crash, while Byron won the race.