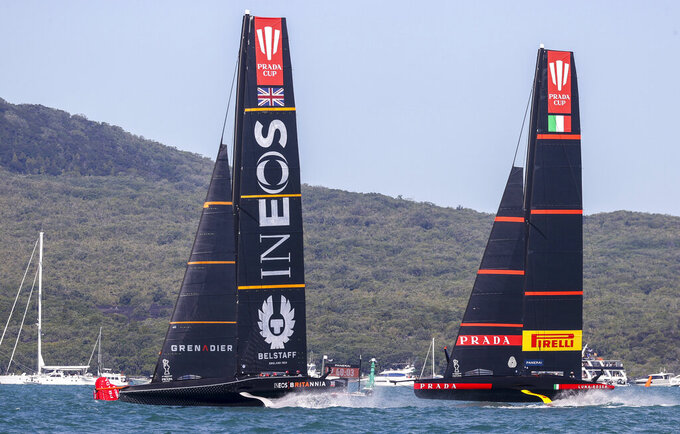 Britain’s attempt to recover the America’s Cup sailing trophy after 170 years has again ended in failure, this time on the opposite side of the world from where the Cup first slipped its grasp.

Luna Rossa will go on to race defender Emirates Team New Zealand in the 36th Cup match next month while Team UK will head home, eventually to reflect on the failure of a well-funded, talented but troubled campaign.

Britain first lost the famous “Auld Mug” in a race around the Isle of Wight in 1851 against the New York Yacht Club schooner America, which gave the ornate silver ewer its name. Vast fortunes have been expended since in Britain’s pursuit of the trophy but all have been fruitless.

“Everyone knows Britain’s never won the America’s Cup,” Ainslie said. “It started off around the Isle of Wight and it’s one event we’ve never won in sport.

“So that’s a huge motivator for the team, myself included. We set out to achieve a target and we want to get that job done and we’ll keep going until we get there.”

Team UK’s failure followed the pattern of previous British challenges, beginning with talent, resources, expertise and promise but still falling just short. In the latest case, there was an Achilles heel.

While Team UK recovered from major technical problems in the America’s Cup World Series before Christmas to compile an unbeaten record in the challenger round-robin and sweep directly into the Prada Cup final, it couldn’t fully overcome a comparative speed disadvantage in light winds.

Luna Rossa fully exploited that weakness during the Prada Cup final. As fate would have it, most of the races in the challenger series decider were sailed in the lower wind range and Team UK was at an insurmountable disadvantage.

Team UK made trade-offs in the design of its race boat Britannia, installing stations for only six grinders while other teams had seven or eight, in order to free tactician Giles Scott to take a heads-up role. Any debrief will have to include a review of that decision.

There were also issues with its rig and sails, which seemed less developed than Luna Rossa. Ainslie said Team UK must learn and improve.

“When you look at a team like Luna Rossa which has been in the Cup game for 20 years, Team New Zealand for 30-odd years, it’s that constant learning and development,” he said.

“Whilst the people may change slightly over that period, as an organization they’re growing each time and it’s that collective learning. For us this is our second go at the cup.”

Ainslie hoped to retain the support of principal sponsor Jim Ratcliffe, the billionaire head of the Ineos chemicals group whose sporting interests extend into motorsport, football and cycling. His influence brought the technical expertise of the Mercedes Formula 1 team to the Team UK campaign.

“It’s been really fascinating for us to be alongside some really impressive sports teams such as the Grenadiers cycling team and Mercedes Formula 1 team and (the marathon runner) Eliud Kipchoge and other high performers,” Ainslie said..

“It’s not just the financial backing but it’s the approach they take to why they’re so successful, the attention to detail and rigor and determination in business that we share in the sporting world.”