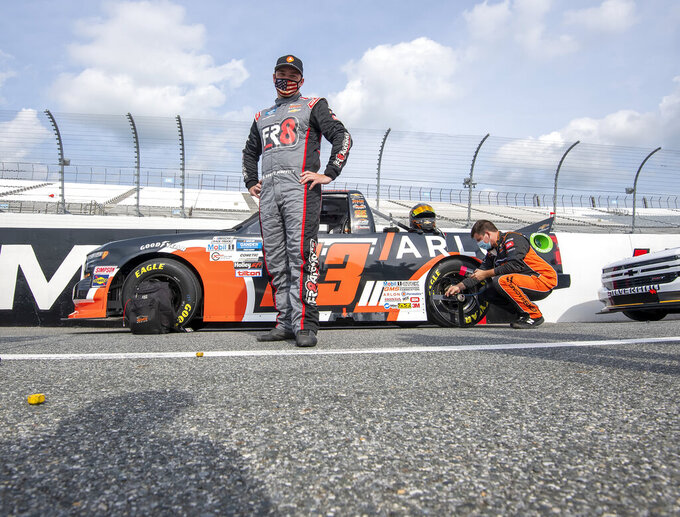 Brett Moffitt (23) poses before the start of a NASCAR Truck Series auto race at Dover International Speedway, Friday, Aug. 21, 2020, in Dover, Del. The underappreciated Truck Series opens NASCAR’s championship weekend with an under the lights Friday night Nov. 6 shootout that could be the most entertaining event at Phoenix Raceway. The path to the winner-take-all finale has been a flat-out demolition derby with two consecutive weeks of wild driving. (AP Photo/Jason Minto, FIle)

AVONDALE, Ariz. (AP) — The underappreciated Truck Series opens NASCAR’s championship weekend with an under-the-lights Friday night shootout that could be the most entertaining event at Phoenix Raceway.

The path to the winner-take-all finale has been a flat-out demolition derby with two consecutive weeks of wild driving. Wrecks, both deliberately caused and the result of over-aggressive driving, have made the Truck Series race the one to watch.

This final four showdown for NASCAR’s feeder series pits a trio of drivers from GMS Racing against veteran Grant Enfinger, the lone driver from ThorSport Racing to advance. GMS Racing and Thorsport are stalwarts of the series that combine to field nine full-time entries.

Brett Moffitt is in the GMS group and looking for a second truck championship in three years. And just like his situation in 2018 when Moffitt won the title for Hattori Racing Enterprises but lost his job because he doesn't bring sponsorship, Moffitt is again likely looking for a ride.

He doesn’t have an extension with GMS for next season and isn't sure what he will be racing in 2021.

“I'm confident I will have something, I don't know if it's exactly where you want but the goal is to stay in competitive equipment,” said Moffitt, who is open to moving up to the Xfinity Series or Cup Series. “A championship will probably go a long way.”

Moffitt is also trying to complete an impressive comeback from fracturing both legs in a motocross bike crash. Moffit was in the accident on the first day of NASCAR’s 10-week shutdown at the start of the pandemic and used the layoff to recover.

Moffitt and GMS teammates Sheldon Creed, an X-Games gold medalist and two-time Stadium Super Trucks Series champion, and rookie Zane Smith are in Chevrolets. Enfinger is in a Ford, and the finalists have combined to win 11 of the 22 races this season.

All four drivers had to physically muscle their way into the championship race via racing that could be considered both daring and dumb. Smith likened last week’s elimination race at Martinsville Speedway to the chaos of a local track referred to as “The Madhouse," and said Truck Series drivers are all hungry to climb NASCAR's national ladder.

Smith said it is clear top jobs are opening in the Cup level with a spate of retirements — seven-time NASCAR champion Jimmie Johnson and Clint Bowyer run their final races races Sunday — and the push is on for 21-year-old Smith and his peers to fill those seats.

“I feel like there's a big movement in the sport right now, on the Cup side, people are going to be retiring soon and those seats have got to be filled," Smith said.

Of the four racing for the title, only Creed found the aggressive racing appropriate.

“We're in the playoffs, right? This is what we've been working for all year," Creed said. “It's just racing hard and I think you are going to see more of that this weekend.”

Creed and Enfinger are each tied with a series-high four wins, and each won in the last round of the playoffs to advance to Phoenix. Enfinger, at 35 the veteran of the finalists, won last week’s mess at Martinsville and finds the series “unfortunately, pretty rough” because of how difficult it is to pass.

“I don’t like that, but that’s the world we live in in the Truck Series,” Enfinger said. “You have to be so aggressive, especially on restarts to be able to make anything happen.”

Moffitt isn’t sure the racing the title contenders can be assured of a clean race.

“I think it's over the line for sure and I feel like I've had to stoop down to those levels,” Moffitt said. "You're not going to win unless you are agressive as (others). It's people getting rushed up too soon and they think they've got to win right away and they tear up a lot of good (equipment) every week.

“I hope the guys that are not racing for a championship are smart about the way they race," he added. "A full season ultimately comes down to one race and hopefully everyone calms down a little bit.”